"We lost an entire generation of kids that aren't drinking milk." 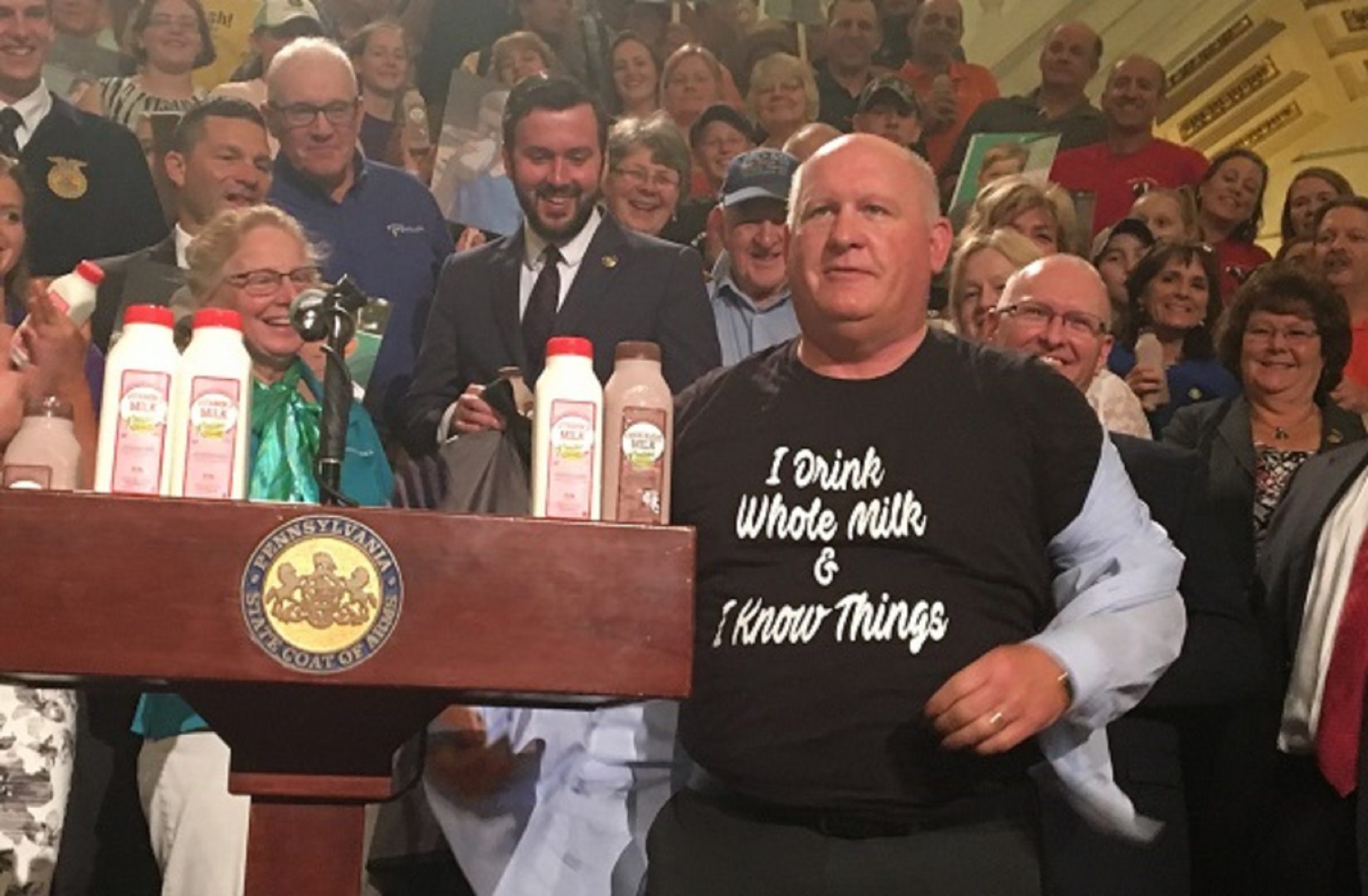 (Harrisburg) — Standing amid a crowd of children, Pennsylvania Dairy Princesses, Amish farmers and state lawmakers, Congressman Glenn Thompson whipped off his suit jacket and tie to reveal a black t-shirt with white lettering.

“That’s right,” he said, quoting the message on his chest. “I drink whole milk and I know things.”

The rally was an occasion for state lawmakers to take a relatively lighthearted break from ongoing budget negotiations. But the root issue behind the event–which featured a giant milk jug and free bottles of milk for participants–is a wrenching one for many Pennsylvanians.

The dairy industry is struggling, and its plight has only gotten worse in the last year.

Thompson, a Republican, represents Pennsylvania’s 15th Congressional District, which covers much of the northwest. He and other state and federal lawmakers think they can boost milk sales with a bill that would amend a 2010 federal law–the Healthy, Hunger-Free Kids Act–that limited schools to offering skim and one percent milk.

But Thompson and other dairy boosters say that’s not enough. The way he sees it, low-fat milk has turned kids off the beverage, and has helped foment the dairy industry’s precipitous decline.

“We lost an entire generation of kids that aren’t drinking milk–they’re not asking for milk at home because they had bad milk experiences at school,” he said.

Pennsylvania is the sixth-largest milk producing state in the country, according to the American Dairy Association.

USDA numbers show that in 2018, the commonwealth lost 370 dairy farms–5.6 percent of its total.

“If you look at the decline in milk consumption in our schools over the past nine years as a result of that misguided legislation, it actually tracks with the financial decline within the dairy industry,” Thompson said.

He and other proponents of whole milk in schools acknowledge, the Healthy, Hunger-Free Kids Act isn’t the only thing impacting dairy. Dairy substitutes–nut, oat, and soy-based “milks”–are growing in popularity.

Another bill, backed by many of the same federal lawmakers, would ban manufacturers from labeling these plant-based beverages as milk.

Studies have found full-fat dairy doesn’t increase mortality, but that too much saturated fat–found in whole milk–still isn’t great. Nutritionists confirm milk is a good source of calcium and other nutrients, but say it’s not necessarily a critical one, and that there are other places children and adults can get those nutrients.

State House and Senate lawmakers are moving resolutions urging their federal counterparts to pass the school milk bill, and to tighten milk-labeling guidelines.

Along with Thompson, GOP Pennsylvania Senator Pat Toomey is sponsoring a bill that would change the Healthy, Hunger-Free Kids Act.