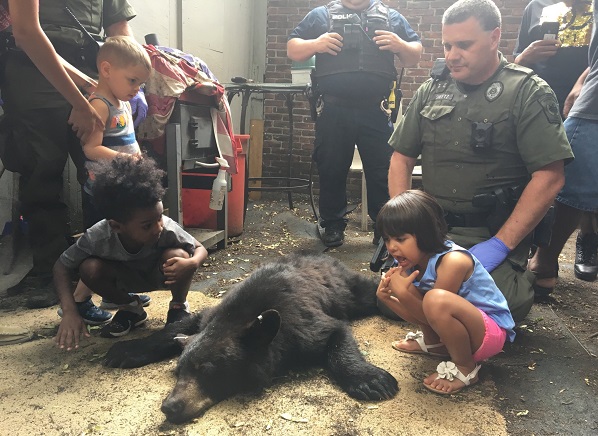 Children got a lesson in wildlife management after the Pa. Game Commission tranquilized a bear that had wandered into Harrisburg. (Katie Meyer/WITF News)

(Harrisburg) — Tabitha Hahn was sitting in her yard with her two dogs Saturday morning when she saw something on her fence that she never expected to see in midtown Harrisburg, about a mile from the state Capitol.

“I definitely didn’t think it was a bear,” she said, “but it’s pretty big, so then I realized that it was after it came over a fence, and then I just tried to get the dogs inside.”

The young male bear climbed up a tree in Hahn’s yard until he was as high as the second-story windows on the century-old rowhomes that surrounded it. That was his final stop on a journey through Harrisburg that quickly drew a crowd.

Pennsylvania Game Commission officers soon arrived and let the crowd know what to expect. They would shoot the bear with a tranquilizer gun. The bear might fall from the tree. It would be OK if that happened. 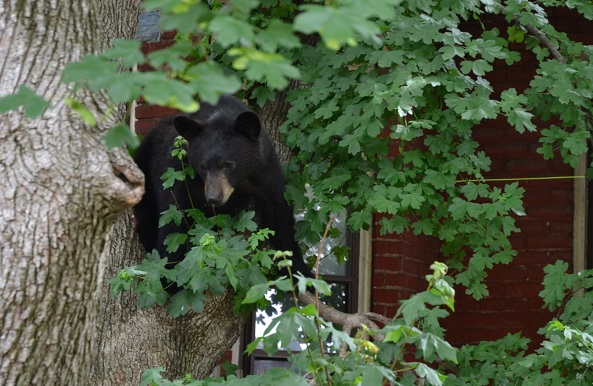 A black bear in a tree in Harrisburg looks at nearby people. (Brett Sholtis/WITF News)

They urged people to stay back so they could do their job.

“I don’t want to stress him out any more than he is,” Game Commission officer Brian Sheetz told the crowd.

For onlookers — especially children — it became a learning opportunity.

After the bear was tranquilized, officers allowed several kids to put metal tags on his ears. 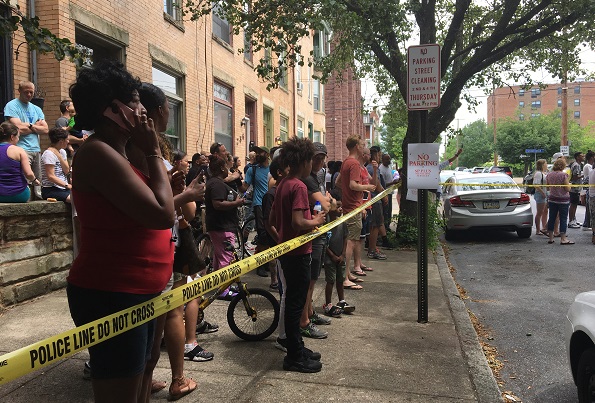 A crowd watches the Game Commission as officers work to tranquilize the bear and get it down from the tree. (Katie Meyer/WITF News)

The tranquilization, wardens explained, is for the bear’s safety more than anything else. While he was unconscious, the officers pulled several ticks out of his fur to “help him out,” Sheetz said.

They also pulled a milk tooth — or baby tooth — which will be sent to the lab and tested to determine exactly how old the bear is.

Sheetz explained all this to the waiting crowd, step by step, and took questions as people crowded around the animal.

“Bears are something they don’t see everyday here,” he said. “So instead of them being scared of them, we answer their questions, let them realize that he’s only here because he’s scared.” 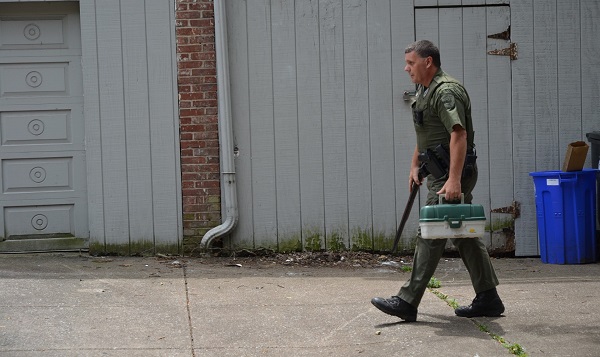 It’s not particularly common for bears to make their way into Harrisburg. Game Commission officer Jeff Kawich estimated it happens about two to three times a year, more often in the early summer.

This bear is a year or so old and weighs about 100 pounds, Kawich said. He likely left his mother only recently.

“What happens is once the cubs from last year start to grow into adults, they all find new territories. Then they end up in populated areas, because we’re close to the mountains and it’s a really easy food source,” he said.

Something likely scared the young bear, driving him into midtown where he became confused and decided to climb the tree.

The Game Commission plans to bring the bear north to the mountains he would typically call home. If all goes well, Sheetz said, he’ll take to the area and won’t wander into any more cities.

But if he or any other bear does, Sheetz said it’s important people stay respectful.

“You got to remember, they lived here long before we have,” Sheetz said. “We moved into their territory.”