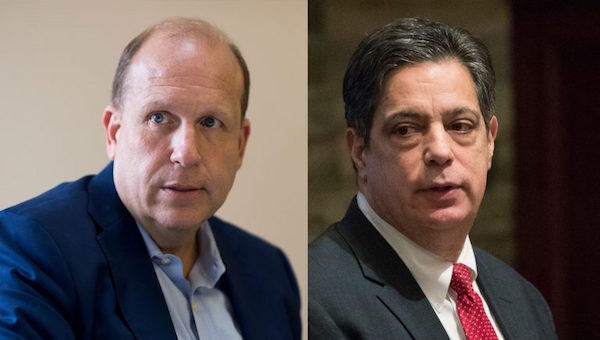 The findings of an independent report examining allegations of sexual assault and inappropriate touching by Pennsylvania State Senator Daylin Leach, D-Montgomery, has put him at odds with caucus leadership.

Leach claimed victory after being briefed on the findings of the probe, saying in a statement that “the investigation … has absolved me of false charges made against me.”

Democratic leadership rejected that assessment, saying it “in no way absolves” Leach.

“Senator Leach’s course of conduct created an unprofessional and sexualized environment. That should not be tolerated in any workplace; we will not tolerate it here. For this reason, I believe Senator Leach should resign from the Senate,” said Democratic Leader Jay Costa in a statement.

Leach, in turn, accused Costa of skewing the takeaway of the investigation and bowing to pressure from those determined to see his downfall. “This is a cover-up, a taxpayer funded cover-up,” he said.

The report, commissioned by Senate Democrats and carried out by the lawfirm Eckert Seamans, followed a string of allegations lodged against Leach, ranging from sexual assault to sharing sexual jokes with members of his campaigns. Last year, those claims derailed Leach’s run for Congress, and led to calls from Governor Tom Wolf that he step down.

A PowerPoint presentation describing the findings of the investigation has been released; the report itself has not been, and it will be updated to include “additional clarification” requested by fellow Democrats, according to a statement from Costa spokesperson Brittany Crampsie.

The slides indicate investigators interviewed 19 witnesses and looked into nine allegations, including a private criminal complaint lodged in 2019, every allegation raised in a December 2017 Philadelphia Inquirer article, as well as “additional relevant allegations uncovered during the investigation.”

The most serious accusation against Leach comes from Cara Taylor, of Bath, Pennsylvania. She alleges that when she was 17, Leach defended her mother on attempted homicide charges and used his position in that case to pressure her to give him oral sex. Taylor was later convicted of perjury for saying she had committed the crime her mother stood accused of during that same trial, which she also blamed on “severe and repeated manipulation tactics” by Leach.

Leach has roundly denied Taylor’s allegation and earlier this year sued her and two other women for defamation.

In the presentation, Eckert Seamans noted that “certain factual inconsistencies in Ms. Taylor’s recollection of events exists” and “none of these allegations occurred while Mr. Leach was a member of the Senate.” Investigators also wrote that “Ms. Taylor steadfastly believed her account of what transpired — her testimony on this point was detailed and passionate.”

According to the presentation, the report found no “evidence of actionable discrimination or harassment” under the Senate’s own rules governing sexual harassment or applicable state law. In Taylor’s case, the investigators concluded “credibility disputes…may only be resolved through a contested hearing held under oath,” such as those during a civil or criminal trial.

Other allegations ranged from unwanted touching of a sexual nature to making off-color statements. Eckert Seamans found in some cases the actual behavior could not be substantiated. In others, the report concluded that while “unprofessional and inappropriate” conduct was reported, “none of the allegations involved claims of sexual harassment.”

The report recommended training and extending workplace policies that applied to the Senate to campaigns, and noted that while no “actionable or discrimination or harassment” was found, jokes of a sexual nature have the “potential to create a hostile work environment.”

Reaction from Leach’s critics and accusers has been swift.

Sara Atkins, of Lower Merion, who has announced she will challenge Leach in the 2020 Democratic primary, also jumped into the fray.

“I am very troubled to see that the investigation called for by Minority Leader, Jay Costa, today, did not remove Senator Daylin Leach from the State Senate,” said Atkins. “The report shows a pattern of behavior that is by definition, sexual harassment.”

Costa has not granted a request for an interview.

Eckert Seamans PPT by on Scribd

Those Philly police with offensive Facebook posts? Some have a long history of complaints