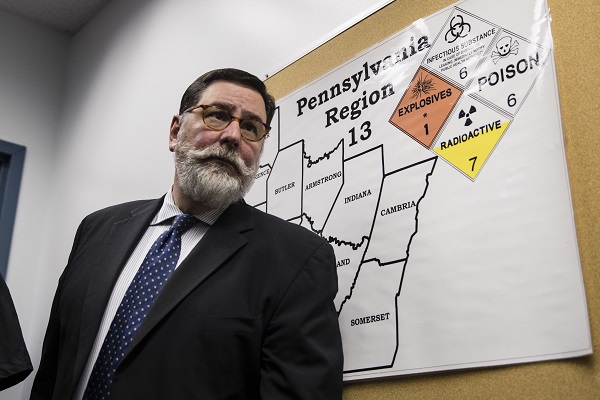 Pittsburgh Mayor Bill Peduto arrives for a news conference in the aftermath of a deadly shooting at the Tree of Life Synagogue in Pittsburgh, Sunday, Oct. 28, 2018. (AP Photo/Matt Rourke)

(Pittsburgh) — Members of the city of Pittsburgh’s Comprehensive Municipal Pension Trust Fund board will explore divesting from fossil fuels, firearms and ammunitions and for-profit prisons. This is at the direction of Mayor Bill Peduto, who sits on the board.

City spokesman Tim McNulty said it’s unclear how divestment would impact the fund’s bottom line, so the Mayor is asking the board to create an exploratory committee to find out.

“We would be willing to make a sacrifice, if necessary, on our returns if it meant a better planet, safer streets or more equal incarceration for some of our affected communities,” McNulty said.

Board Chairman Ralph Sicuro said he’s open to discussing divestment, but he has some concerns.

“Our main responsibility has to be our fiduciary responsibility, which is to ensure the health of the fund and that benefits are made to the beneficiaries,” Sicuro said. “Everything else is secondary to that.”

Cities around the world have taken similar actions. Last month, Montreal Mayor ValÃƒ©rie Plante asked for a divestment from fossil fuels for city pension plans. In 2017, the Philadelphia Board of Pensions and Retirement voted to divest from private prisons.

If convened, the exploratory committee would make recommendations regarding divestment by the end of 2019.