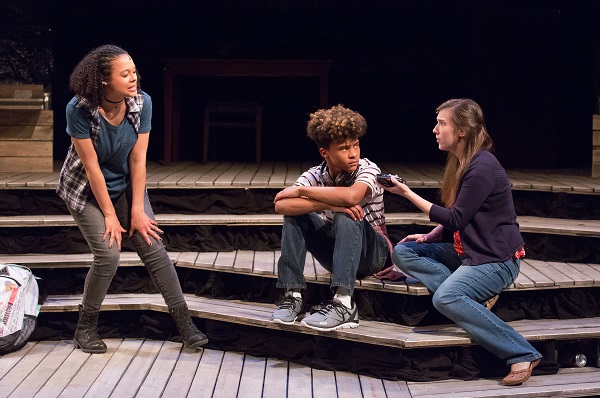 (Philadelphia) — A large wall of coal is the backdrop of the stage at the Lantern Theater in Center City Philadelphia.

The musical staged there is set in Luzerne County. It’s called “Minors,” as in juveniles.

But you wouldn’t be wrong to think about the other kind of miner.

“The coal companies really had control over the lives of people who worked there,” said co-author Kittson O’Neill, referring to industry practices of hiring immigrants without informing them of their rights. “That had an interesting parallel with a private prison industry that is literally taking control of the lives of kids and exploiting those lives for their profit.”

Luzerne County was the site of the “Kids for Cash” scandal, where two judges conspired with for-profit juvenile detention facilities. The judges made sure the facilities were full by giving children outrageous sentences for the most minor offenses, in exchange for millions of dollars in kickbacks.

Although specifically rooted in Luzerne County, O’Neill and her collaborator Rob Kaplowitz — who is also her husband — wanted the story to resonate beyond coal country.

“Our goal is to illuminate the deeper corruption, not only of a prison system, but of a justice system that is no longer concerned about the good for the community,” she said. “When corruption becomes endemic, when we don’t see it anymore because that’s the way it’s done, that can happen anywhere.”

This musical about the scandal was not their original idea. O’Neill and Kaplowitz were approached, out of the blue, by the Lantern Theater Company in Philadelphia with a commission to write and compose the play.

Both are longtime theater artists in Philadelphia, O’Neill as a director and actor, Kaplowitz as a sound designer. They had never collaborated on writing a play before. O’Neill had never before even directed a musical, daunted by the complexities of the genre.

It’s a fictionalized version of the story that played out over several years, simplified to work better on stage. There is only one corrupt judge, for example, and some of the kids caught in the scandal have been turned into composites of several people; other characters were made up entirely.

O’Neill and Kaplowitz wrestled with the complexities of constitutional law, the nature of criminal justice, and the history of corruption in Luzerne. They worried about oversimplifying it: Kaplowitz did not want to strip this down a story about good guys taking down a bad guy.

“It’s an easy answer to say that this was a bad guy,” he said. “But it seemed more interesting to us to look at it as a system of corruption that inevitably led to this judge.”

Kaplowitz and O’Neil spent a lot of time in Luzerne County doing research, not just on the details of the case but on the people who live there. While they dug deeply into the history of the region, Kaplowitz had his ear glued to music, trolling record stores and scanning the radio dial.

“I was waiting to get a sense of the genre of the area,” he said. “The parents are a little more in the country rock world, but the kids are definitely, very much in a rock environment.”

Kaplowitz settled on something in the Americana vein, a little John Mellencamp, and a little Tom Petty. He personally feels comfortable with heavy metal; the musical’s live four-piece band has aggressive electric guitar.

The nature of the story makes it work as a rock musical.

“One of the things we heard a lot was that these kids felt voiceless,” said Kaplowitz. “No one could hear us. We were shouting and no one would hear us.”

“I don’t even understand,” the kids sing after they are inexplicably sentenced to prison.

That plea turns into a shriek: “I can’t imagine what I done! I am really scared!”

The heart of this musical is the kids.

“When you’re an adolescent, that is when you begin to understand — how the world works, who you are in that world, and how you understand your country and your culture, and what it asks of you, and what you can expect of it,” said O’Neill. “To have this kind of injustice visited upon adolescents seems like a greater crime. You’re teaching something about what America is that will be very hard to repair.”

“Minors” at the Lantern Theatre opens Wednesday and runs for four weeks.