The predatory falcons, once completely wiped out in Pennsylvania, have settled on the 15th floor ledge of a building that’s home to the Department of Environmental Protection.

(Harrisburg) — If you want to get a young peregrine falcon out of its nest without its parents beating you with their wings, you’re going to need a broom.

Every year, they put on harnesses, hard hats and goggles and shimmy onto a ledge on the Rachel Carson State Office Building, 15 stories up. Their goal is straightforward: Gently grab the nestlings and stick them in cardboard boxes so they can be banded and tracked, all while avoiding the parents.

The broom is a distraction, so the adult falcons dive-bomb it instead of the biologists’ heads.

It works—most of the time.

“It has happened,” he added, laughing. 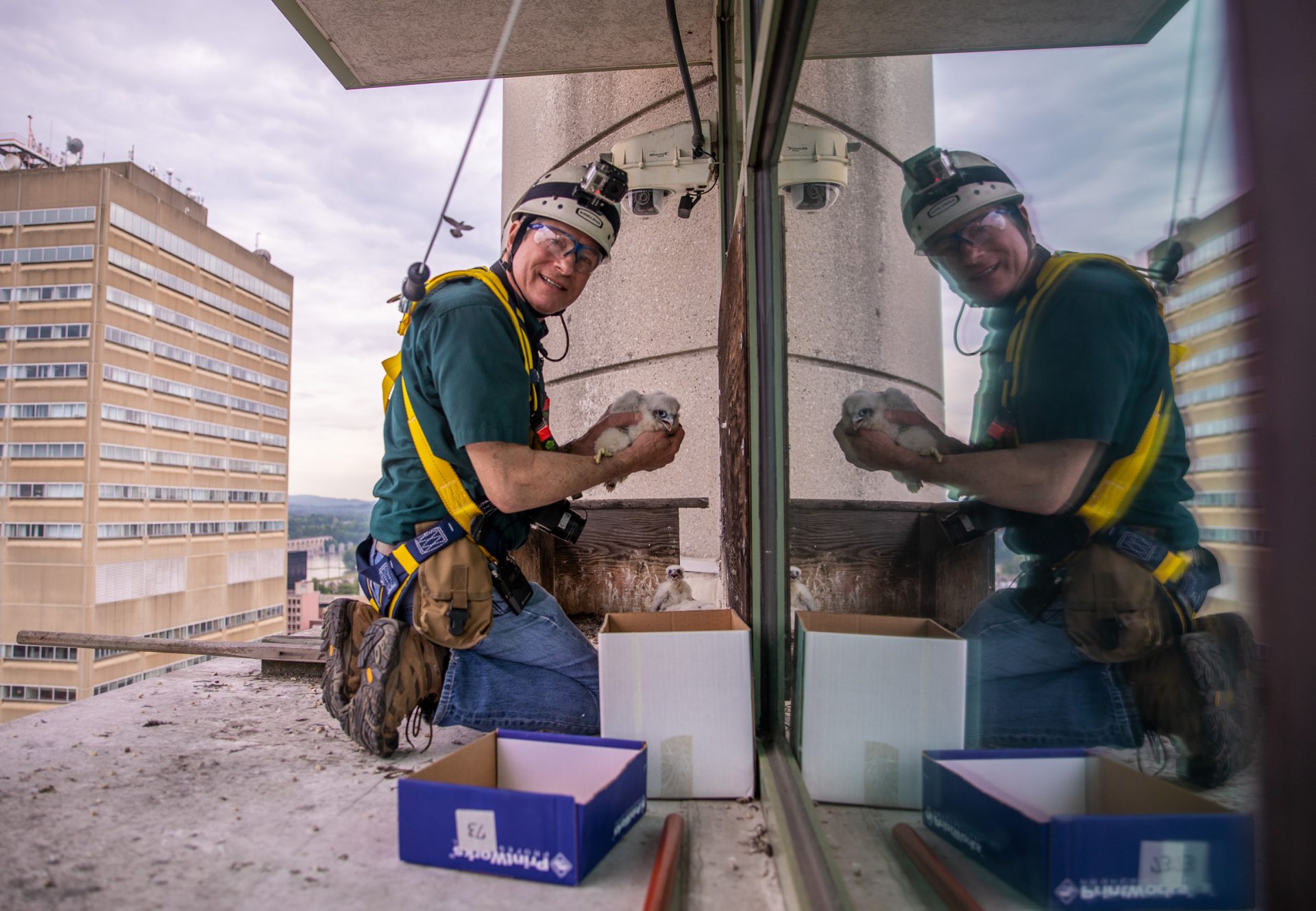 Art McMorris holds a peregrine nestling, which will soon be given a checkup and colored band so it can be monitored.

McMorris has been banding and tracking the Rachel Carson falcons since he started at the agency in 2004.

The birds have been here a little longer than that.

A pair first landed on the 15th floor ledge in 1997 but didn’t produce any chicks. Two more gave the spot a shot three years later, and it has been occupied ever since.

The peregrines and the building they live on have become well-known in birding circles.

Falcons mate long-term and are strongly attached to their territory. Enthusiasts have gotten to know the birds’ personalities like they’re old friends, thanks to a live stream from the cameras around the ledge.

Feeding time! 🐥🐥🐥🐥 The young #HbgFalcons continue to grow and will be banded on May 17. Have questions? 🤔 Ask them using #HbgFalconsBanding. Learn more on Falcon Wire and stay tuned to the PA Falcon Cam!
👀 ➡ https://t.co/SAiKE3VKM0 pic.twitter.com/Uc0LmP7M52

Thousands of people watch, and some go a step further.

Renee Larry, a Department of Environmental Protection worker with a falcon tattoo on her chest, is one of Harrisburg’s more active falcon-watchers.

During the spring when the year’s young falcons hatch and the ledge sees a flurry of activity, she typically gets to the building early in the morning to check on them. While she’s working, she keeps a walkie talkie on hand to monitor the birds, and takes a night shift to watch them once she’s finished for the day.

Young, urban falcons have high mortality rates, especially in the first weeks they learn to fly. Larry and a small group of dedicated birdwatchers try to keep them out of trouble.

One year, she recalled, a fledging falcon landed in the middle of a busy street.

“I had to stop the cars and throw my jacket over it, get it and save it,” she said. “That was my most memorable one.” 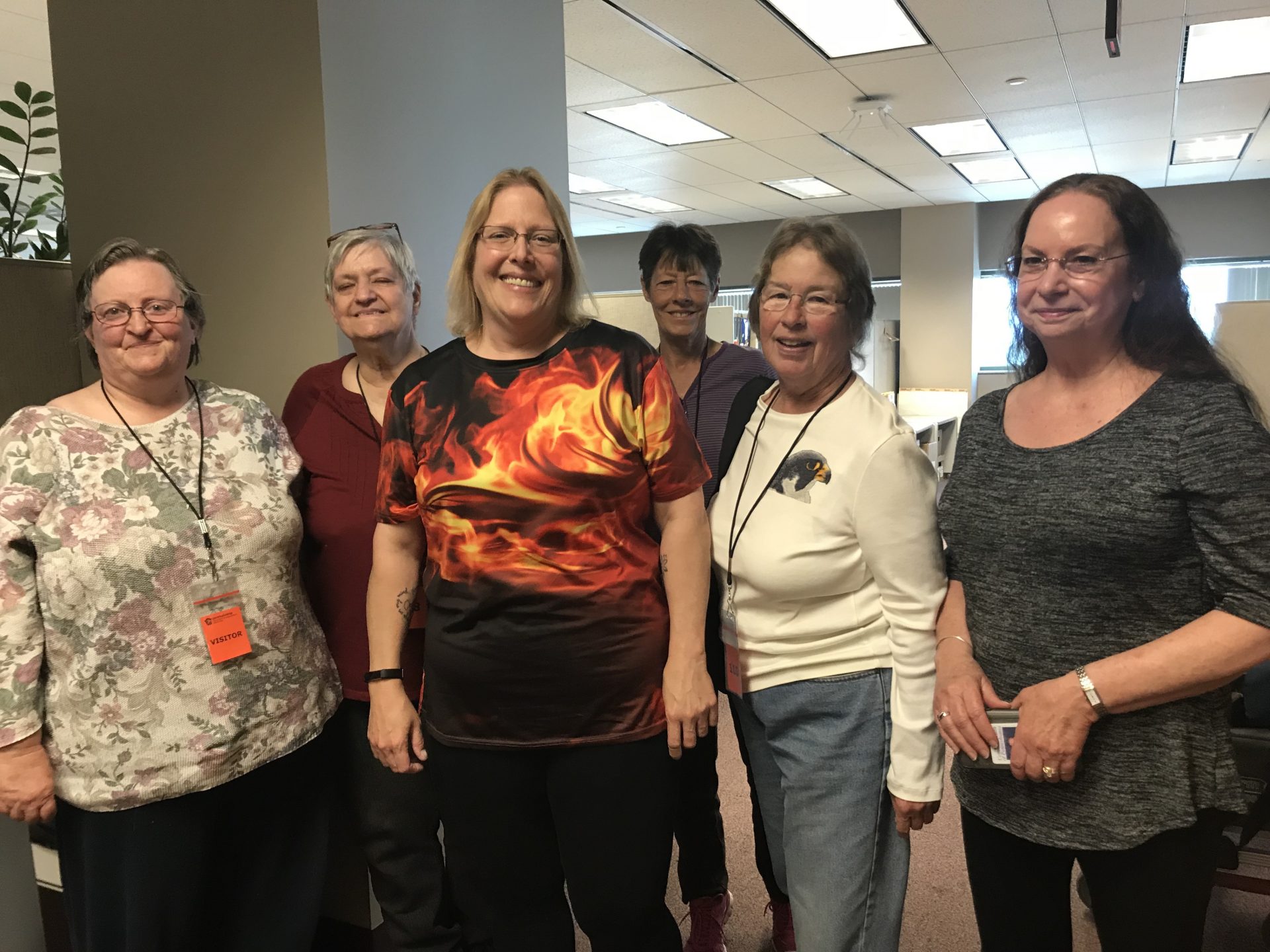 A group of dedicated falcon-watchers attend the banding of the young peregrines.

Once they get through that touch-and-go period, the Rachel Carson falcons scatter—often across the northeast, Midwest and Canada.

Peregrines hunt other birds, and are considered the fastest animal in the world. In a dive, they can hit speeds above 200 miles per hour.

When they reach adulthood, the falcons thrive in cities. As of 2013, there were around 40 known nests in Pennsylvania—some on the cliffs falcons naturally favor, and many on buildings and bridges.

But just a few decades ago, so many healthy pairs would have been unthinkable.

That’s because of DDT.

The pesticide became ubiquitous in the 1940s. Planes sprayed it liberally over crops, and people doused their houses, pets and children in it.

DDT wasn’t good for adult animals. But its impact on predatory birds was especially profound when it came to eggs, weakening and cracking shells before they could hatch.

According to the Game Commission, peregrine falcon nests disappeared from Pennsylvania around 1959.

That’s where the namesake of the Rachel Carson Building comes into all this.

Biologist Rachel Carson’s 1962 book The Silent Spring painted a picture of a world plagued by illness, where people and animals suddenly fall sick, and where fish and birds slowly disappear.

It became a bestseller and helped galvanize resistance to indiscriminate pesticide use.

DDT is now heavily regulated, and Pennsylvania’s peregrines are well on their way to recovery.

Cindy Adams Dunn, who heads the state Department of Conservation and Natural Resources, said it’s a lesson for environmentalists working on the issues of today—like climate change

“Even though environmental issues may seem insurmountable, when people decide they’re going to solve them and take proactive actions and have appropriate regulations and get themselves educated and involved, people can solve environmental problems,” she said.

The department is trying to keep that lesson alive through the falcons on the Rachel Carson Building.

After Art McMorris got this year’s four chicks off the 15th-floor ledge, he brought three downstairs for a Q&A with some fifth graders—many of whom are in their school’s birding club. 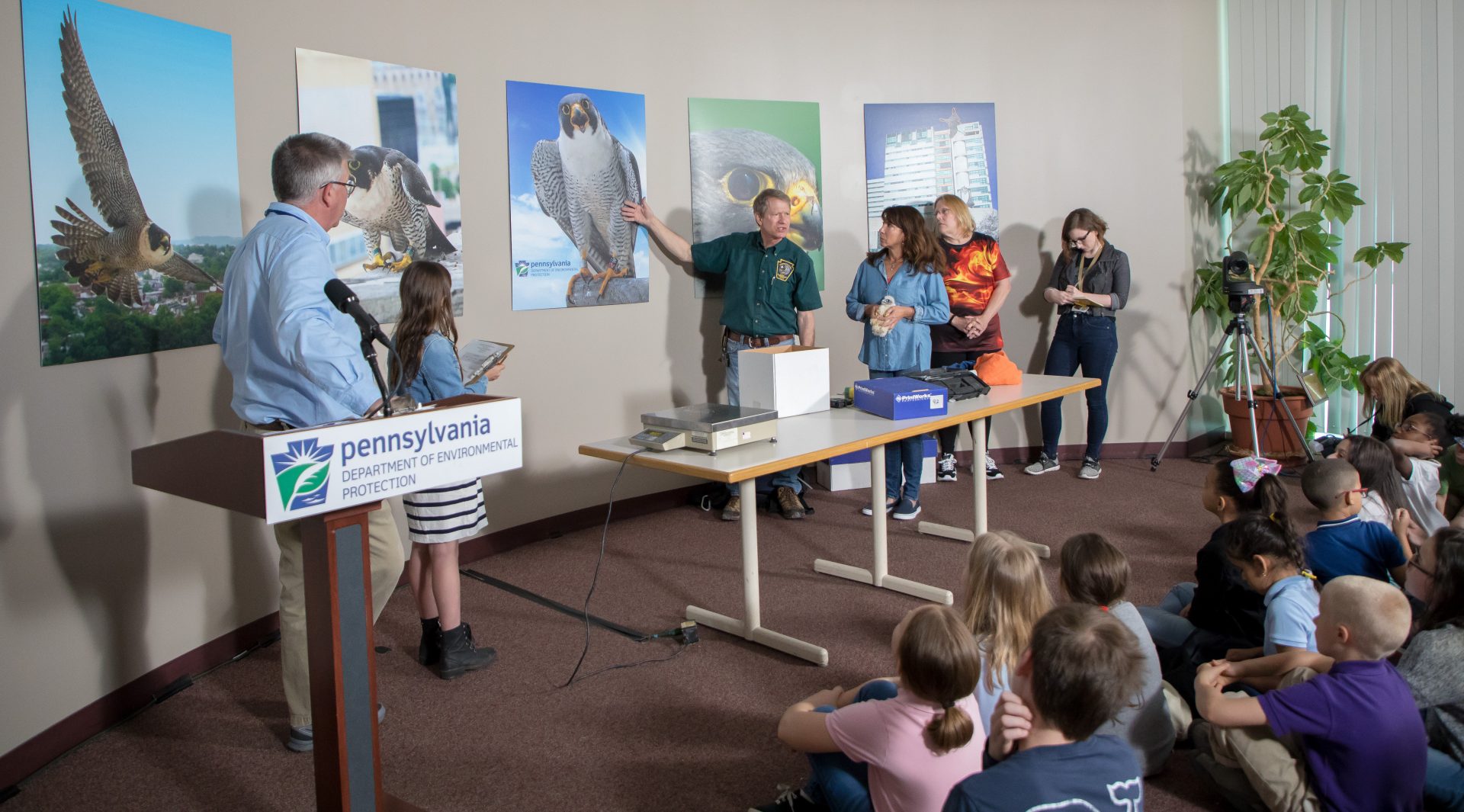 McMorris, Larry, and several others give a demonstration about peregrine falcons for a group of fifth-grade students.

All of this year’s falcon chicks—three males and a female—are healthy.

Soon they’ll start learning to fly. Even though it’s one of the more treacherous times in their lives, falcon watcher Sue Hannon said it’s also the most exciting.

“It’s like this is Christmas for me,” she said. “I look forward to it that much.”

The young falcons will hang around Harrisburg for a little while.

If all goes well, they’ll fly away—the newest representatives of a species that, finally, has a future.