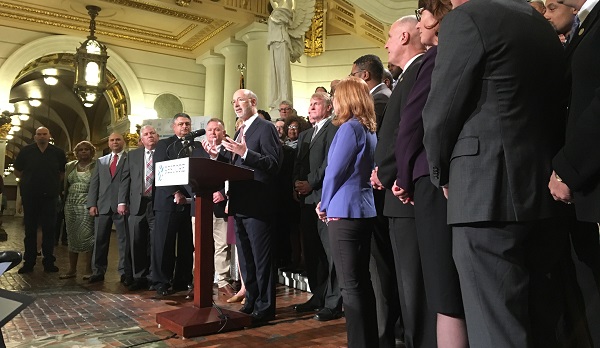 Wolf flanked by state, county, and municipal officials who support his Restore PA proposal, urges other lawmakers to get on board. (Katie Meyer/WITF)

(Harrisburg) — Since January, Governor Tom Wolf has been traveling around the state shopping his new infrastructure plan to municipal and county officials.

On Wednesday, he brought dozens of them into the Capitol for a press conference touting it. Notably missing, however, was most of the Republican delegation.

The plan, Restore PA, is a long wish-list of infrastructure projects, from high-speed internet expansion, to grants to reduce flooding and stormwater pollution, to road and bridge repairs. A few items are already on the GOP agenda, like money for businesses to install utility lines.

All told, Wolf wants to raise and then spend $4.5 billion over four years.

The source of that money is the plan’s most contentious element. Wolf is proposing a sliding severance tax on natural gas drillers–an idea he has pitched in some form every year he has been governor.

Every year, the GOP-controlled legislature has decisively opted out.

Wolf said he’s open to other funding suggestions. But, he noted, “so far I haven’t heard any.”

Bills to authorize the plan haven’t been introduced, and many of its key details are still up in the air.

Representative Tom Murt, a moderate Republican from Philadelphia, is sponsoring his chamber’s version of the measure. He said collecting support in his own party is slow.

“Some of the members are, on principle, not comfortable or warming up to the concept of a severance tax,” he said.

He added, the House has “a lot of Republicans who have not signed on, but are interested in the bill. They’ve expressed some concerns, they have made note of those concerns, and they’re continuing to learn about what the proposal is.”

Murt and the other lawmakers pushing the bills–a mix of Democrats and a few moderate Republicans–said they hope to get the measures formally introduced in the coming weeks.

Republican leaders have been largely silent on the bill.