FILE PHOTO: An informational card about ticks distributed by the Maine Medical Center Research Institute is seen in the woods in Freeport, Maine.

Pennsylvania has had the highest number of Lyme disease cases in the U.S since 2000. 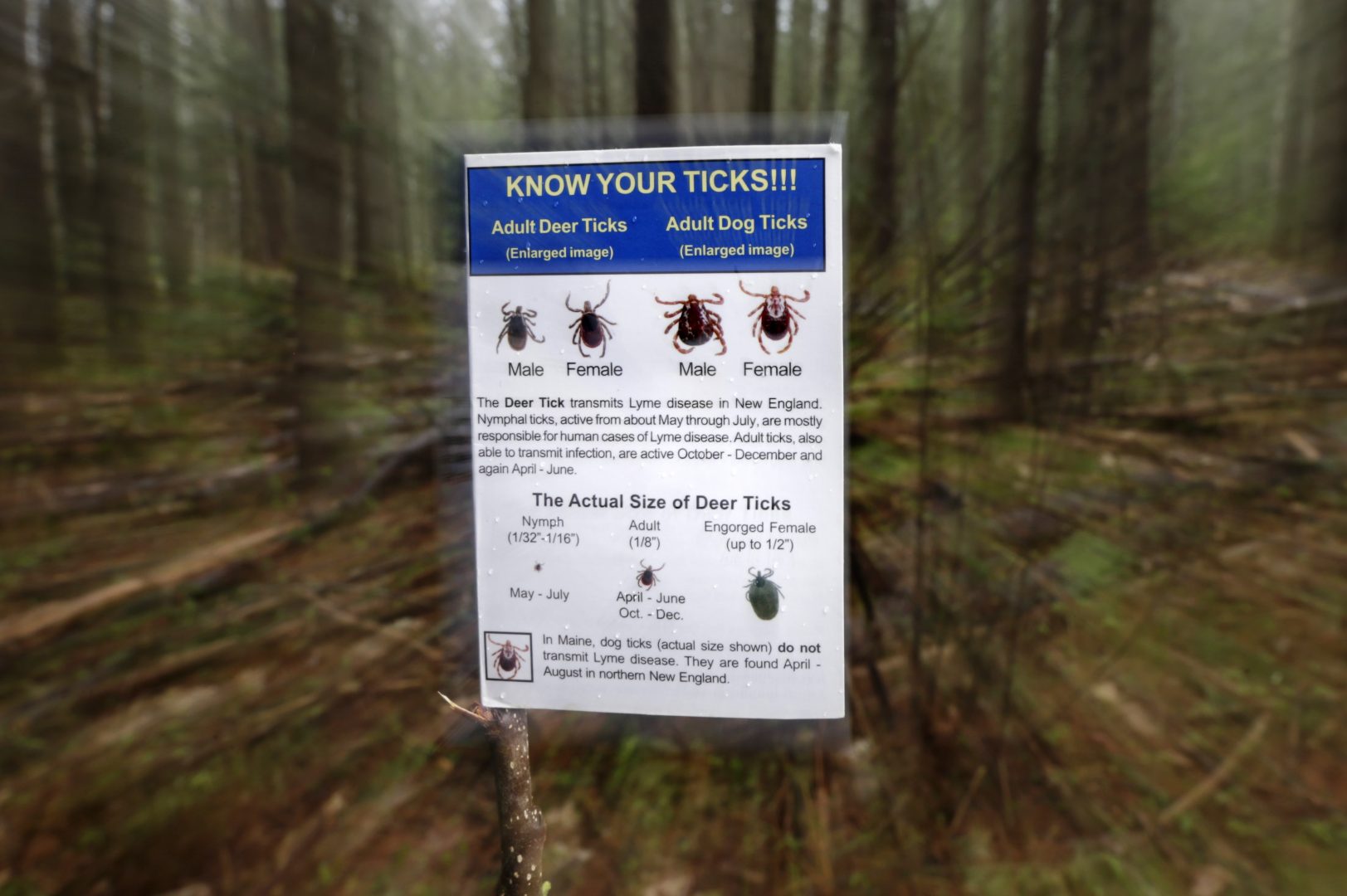 FILE PHOTO: An informational card about ticks distributed by the Maine Medical Center Research Institute is seen in the woods in Freeport, Maine.

(Harrisburg) — The tick responsible for most cases of Lyme diseases has boomed from nearly non-existence in Pennsylvania in the 1960s to the most commonly found tick across the state today, according to Penn State researchers.

“Before 1990, the majority of tick submissions (in a 117-year study that gathered ticks from residents across the state) were identified as Ixodes cookei (groundhog or woodchuck tick). Right now, the dominant species is Ixodes scapularis, or blacklegged tick, which is the primary vector of Lyme disease,” said Joyce Sakamoto, assistant research professor of entomology in the College of Agricultural Sciences. “But (the black-legged) tick was almost nonexistent in Pennsylvania in the 1960s.”

The blacklegged tick also is known as the deer tick.

The researchers – Sakamoto, retired senior extension associate Steven Jacobs and doctoral candidate Damie Pak – said the blacklegged tick boom can be correlated with climate change and variability; shifts in land use that can lead to habitat loss and fragmentation; and changes in human or animal behavior that may bring ticks and hosts into closer proximity.

They believe the blacklegged tick population might have exploded in recent years because timber that was cut down around 1900 is growing back and providing ticks with an expanded habitat, increasing their contact with people.

The Centers for Disease Control and Prevention notes a 3.5-fold increase in vector-borne diseases in the U.S. from 2004-2016, with more than 76 percent of cases caused by tick-borne pathogens. Most of those cases are Lyme disease.

Pennsylvania has had the highest number of Lyme disease cases in the U.S since 2000.

The researchers analyzed 117 years’ worth of specimens and data submitted primarily by residents from across Pennsylvania.

Since the early 1900s, people have submitted ticks for identification to the Penn State Department of Entomology and its forerunners. The submitted specimens became part of Penn State’s Frost Entomological Museum collection.

“Then in the 1960s, the late entomology professor Robert Snetsinger ran a statewide media campaign to encourage tick submissions, and he received thousands from citizen scientists,” Sakamoto said. “He also conducted active surveillance, capturing and collecting ticks in the field.”

Jacobs led a similar public-service media campaign in the 1990s, resulting in another surge in tick submissions from citizens across the state.

Ticks were submitted from all 67 counties in Pennsylvania, and the specimens included 24 species. Courtesy of the Centers for Disease Control / The Associated Press

This undated photo provided by the U.S. Centers for Disease Control and Prevention (CDC) shows a blacklegged tick – also known as a deer tick.

The researchers compiled data from more than 7,000 tick specimens dating from 1900 and analyzed the submissions for tick-community composition, host associations and spatio-temporal dynamics.

Sakamoto said blacklegged ticks likely declined in the early 20th century because timber-harvesting practices such as clearcutting caused deforestation and destroyed habitat for deer and other wildlife that serve as hosts.

As reforestation spread across the state and habitat was restored in the late 1900s, the population of blacklegged ticks exploded.

Blacklegged ticks now are found in every county in Pennsylvania, although the Frost specimens suggest that they are most prevalent in northcentral Pennsylvania counties such as Elk, Forest and Cameron.

In addition to tick prevalence and geographic distribution, host-association data accompanying submitted tick specimens also can help in assessing risk, according to the researchers.

“Some species’ common names are misleading because they imply only one host,” Sakamoto said. “For instance, Ixodes cookei, the so-called groundhog tick, is really a generalist that also will feed on opossums, raccoons and other species — and may bite humans if given the opportunity. This tick also is a potentially important vector of Powassan encephalitis virus — a serious pathogen — so commonly held misconceptions about tick-host associations may result in people underestimating or ignoring the risk.”

The researchers concluded that the best program for monitoring ticks would employ both passive and active collection methods and would not focus solely on the most important “tick du jour,” such as the current emphasis on the Lyme-carrying blacklegged tick.

“The goal of surveillance should be to look for everything — not just the species that currently poses the biggest threat — so we can be prepared for what’s coming,” Sakamoto said. “The consequences of neglecting other potential ticks of epidemiological significance include missing shifts in tick biodiversity, not monitoring range expansions of vectors, and not detecting the presence of introduced species, such as the Asian longhorned tick recently found in Pennsylvania.

“Conducting robust surveillance and analyzing historical data sets such as this can help public health officials and researchers to identify high-risk areas, discover ecological trends and develop predictive models for assessing the risk of tick-borne disease,” she said.

Native fungi found to be deadly to invasive pest in Pa.