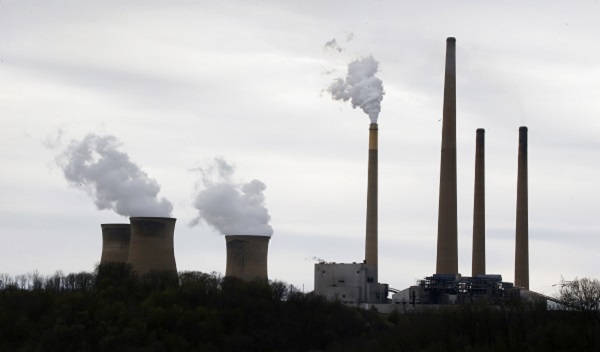 The consortium, called the Regional Greenhouse Gas Initiative, is a cap-and-trade program among Northeastern and mid-Atlantic states that requires power producers to buy allowances for emissions above a certain limit.

“I think that’s something we really need to take a serious look at,” Wolf told a Capitol news conference Monday.

The money from auctioning emissions allowances could be spent on clean-energy or energy-efficiency programs.

Wolf’s comments also come amid a heated debate in the state Capitol over whether Three Mile Island and Pennsylvania’s four other nuclear power plants should get hundreds of millions more in ratepayer dollars to compensate them for their “zero emission” electricity in the age of global warming.

Wolf’s administration has previously issued a roadmap to achieve his goal, announced in January, to reach an 80% emissions reduction by 2050, which is in line with 2015’s Paris climate agreement.
A cap-and-trade program is one of those options.

Wolf, however, also pointed out that Pennsylvania would stick out in the consortium, which right now includes nine states stretching from Maryland to Maine.

Wolf has remained noncommittal about his position on the nuclear power plant legislation, as have many of the state’s top Republicans in the GOP-controlled Legislature.

The state’s considerable natural gas industry opposes the legislation, and many Democrats have said they won’t support it without considerable concessions to advance the goals of renewable energies in Pennsylvania.

The debate is running up against a June 1 deadline.

That’s when Three Mile Island’s owner, Chicago-based Exelon Corp., has said it will begin the monthslong process of shutting down the financially struggling plant that was the site of a terrifying partial meltdown in 1979.

Joining the Regional Greenhouse Gas Initiative may not happen quickly, if at all. House Majority Leader Bryan Cutler, R-Lancaster, believes that joining it requires legislative approval, his office said in a statement Monday.

It is something House Republicans are considering, but the Legislature must first weigh the economic and environmental impact, Cutler’s office said.

“Currently, there is no national regulation of carbon dioxide, so members will need to consider what impact statewide regulation would have on what is a global challenge,” it said.

Wolf’s office, however, said Pennsylvania has broad authority to regulate air pollution, including carbon emissions. However, it said, without legislation, the state would not be able to spend the money raised by auctioning emissions allowances.