About 20 years ago, Hope Adkins-Durante and her husband moved to the Eastern Lancaster County School District, a largely rural community. It wasnŌĆÖt far from where Adkins-Durante herself went to school.

Now, Adkins-Durante is a registered nurse and mother of three children who go to Eastern Lancaster County schools. The past few months, she said, have been ŌĆ£a little shocking.ŌĆØ

The district of about 3,100 students is in the middle of a debate over transgender rights, one that is dividing the community.

More than 200 people showed up to the latest school board meeting on Monday night as the board passed a ŌĆ£biological sexŌĆØ policy for bathrooms and locker room use.

That is the type of policy that the Pennsylvania School Boards Association has said ŌĆ£will almost certainly be struck downŌĆØ because it limits transgender students from using facilities aligned with their gender identity. The Eastern Lancaster County policy is set to go into effect May 14.

Adkins-Durante opposed the policy. And the public debate over the issue has changed how she sees her community.

ŌĆ£IŌĆÖm learning that itŌĆÖs not as diverse as I thought it was,ŌĆØ she said. ŌĆ£…ItŌĆÖs hard now seeing it in a different light, because had I known this, I donŌĆÖt know that I would have raised my family here.ŌĆØ 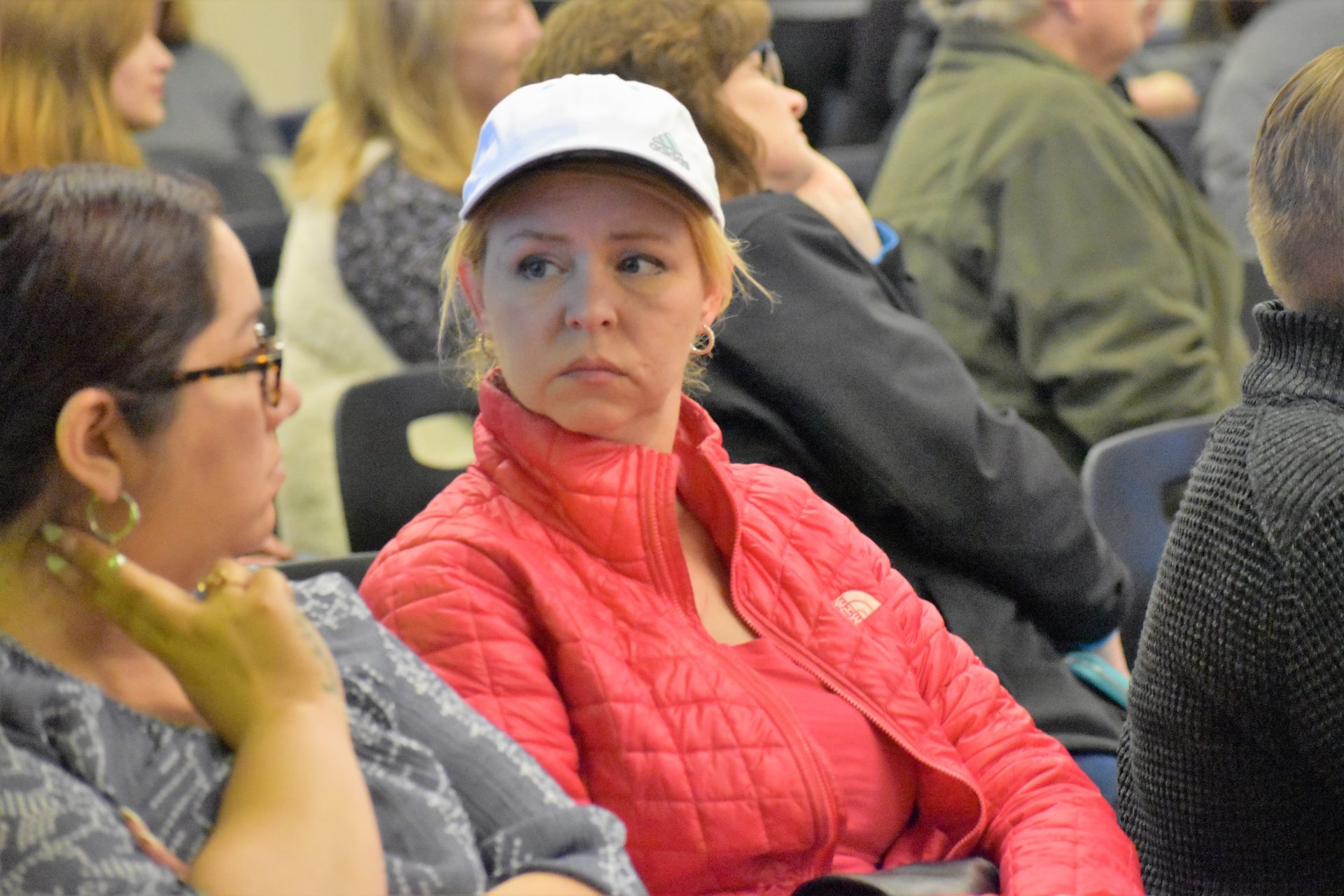 Hope Adkins-Durante waits for the Eastern Lancaster County school board to vote on a “biological sex” policy for students on April 15, 2019. Adkins-Durante opposed the policy.

Stu Martin, the father of two children in the district, is one of the people who has encouraged the school board to separate bathrooms and locker rooms by ŌĆ£biological sex.ŌĆØ

After the meeting, Martin described the dispute as ŌĆ£a clash of civilizations.ŌĆØ He thinks some people have the wrong idea about his side.

The debate in Eastern Lancaster County shows no signs of going away soon, and itŌĆÖs one that other districts could confront. HereŌĆÖs what you need to know about the issue, the potential legal risk for the school district and what comes next.

How did the Eastern Lancaster debate start?

In past years, the school district worked with transgender students and their families to allow the students ŌĆ£to use single-user restrooms or have alternative locker room arrangements,ŌĆØ Jeff Litts, an attorney for the district, said in January.

But he said this year, the ŌĆ£family of a transgender student insisted that their childŌĆØ have access to boysŌĆÖ restroom and locker room facilities at the high school. Litts said the student is ŌĆ£a biological femaleŌĆØ who identifies as male.

Locker rooms werenŌĆÖt an issue in the first semester, because the student did not have a physical education class, Litts said. But this semester he did. The district allowed him to use the boysŌĆÖ locker room, and Litts said the district took steps to protect the privacy of students, including installing changing stalls.

But there was still a public outcry, and more than 250 people attended a school board meeting in January, LNP reported.

The school district is considering spending about $1 million to get rid of gendered locker rooms. Instead, the district would have private showers and changing stalls for high school students. 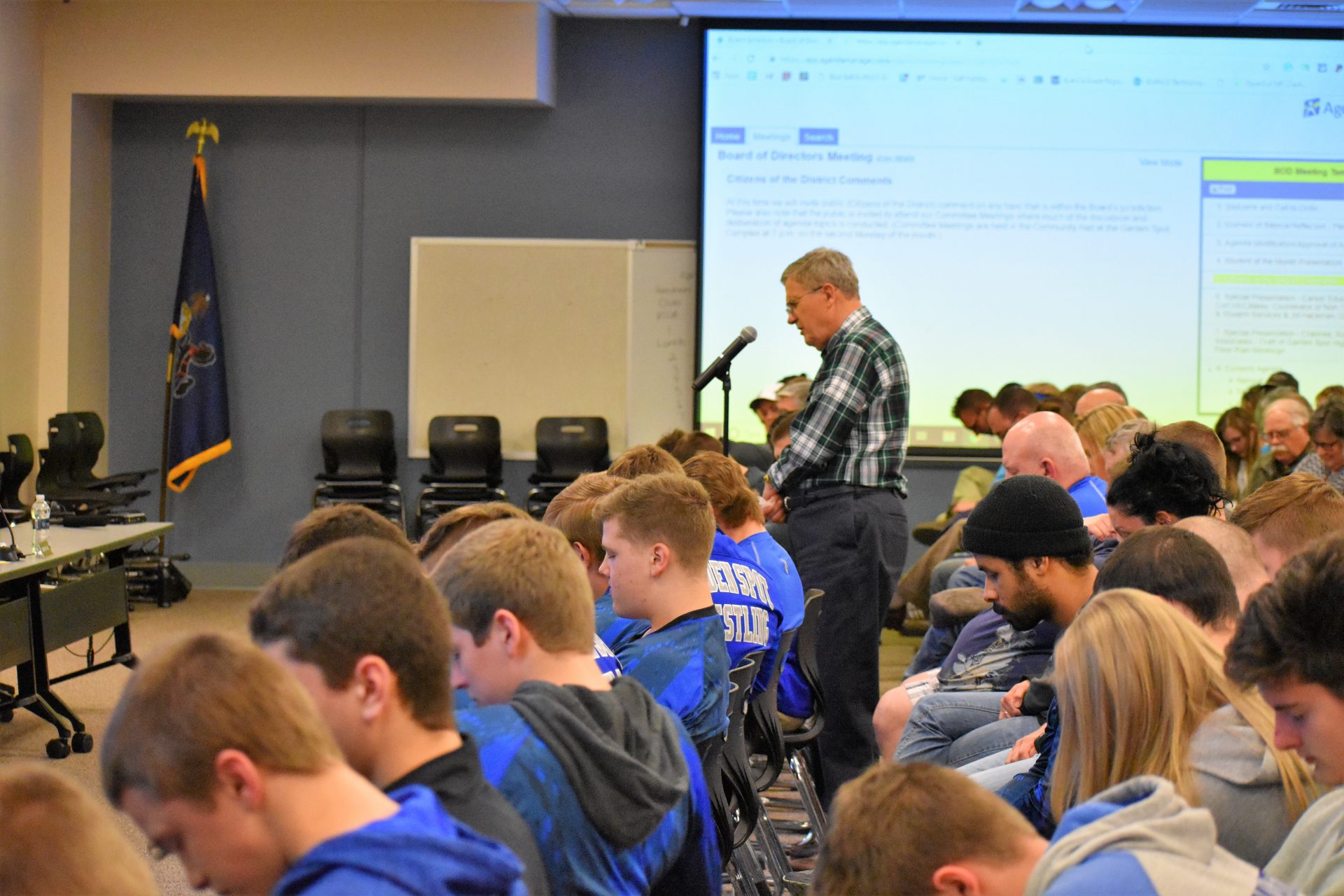 A community member leads a prayer during the public comment section of the Eastern Lancaster County school board meeting on April 15, 2019.

What happened on Monday?

The board approved a student privacy policy with a ŌĆ£biological sexŌĆØ addendum that would prohibit transgender students from using the locker room or bathroom that matches their gender identity.

No attorney for the district reviewed the addendum. During the meeting, school board members also eliminated language suggesting the new policy was a recommendation as opposed to a requirement.

What are community members saying?

There are, broadly speaking, three camps. 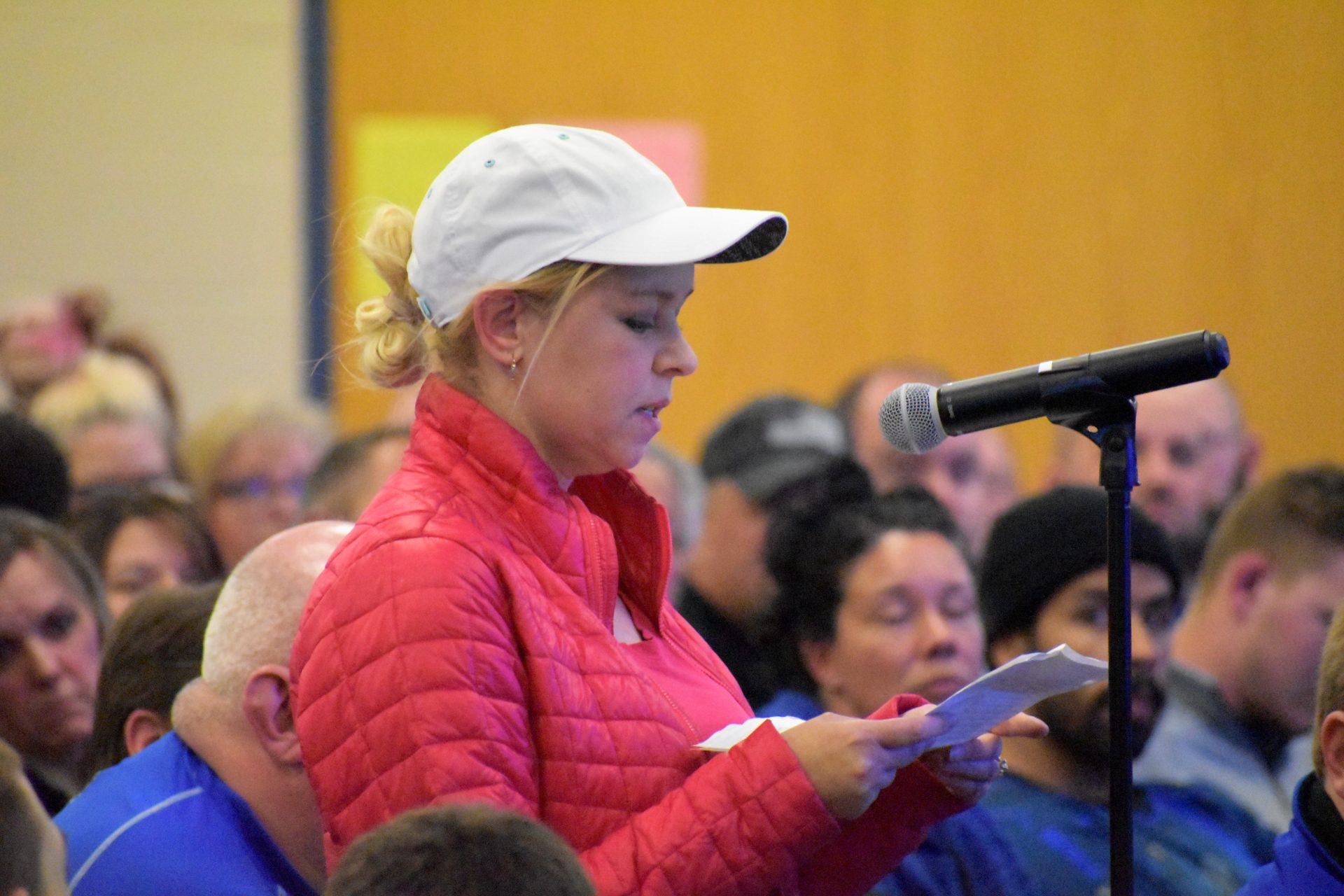 Hope Adkins-Durante, a mother of three children in the Eastern Lancaster County School District, speaks during an April 15, 2019, school board meeting.

ŌĆ£His gender has never been an issue for us. It wasnŌĆÖt even something I thought about until it seemed like the adults started speaking out a lot more and making it an issue,ŌĆØ Adkins-Durante said after the meeting. ŌĆ£And as a mom, I just — it bothers me because heŌĆÖs such a great kid.ŌĆØ

In another camp, there are people who raise legal concerns. Rodney Jones, a school board member who voted against the ŌĆ£biological sexŌĆØ policy, focused on the potential costs of a lawsuit on Monday evening.

And there are people, such as Martin, who donŌĆÖt want transgender students to use the locker room and bathrooms that match their gender identity.

ŌĆ£In the Bible, it says that God created them male and female,ŌĆØ Martin said.

Martin said he expects there will be a lawsuit — and that heŌĆÖs not concerned about it. 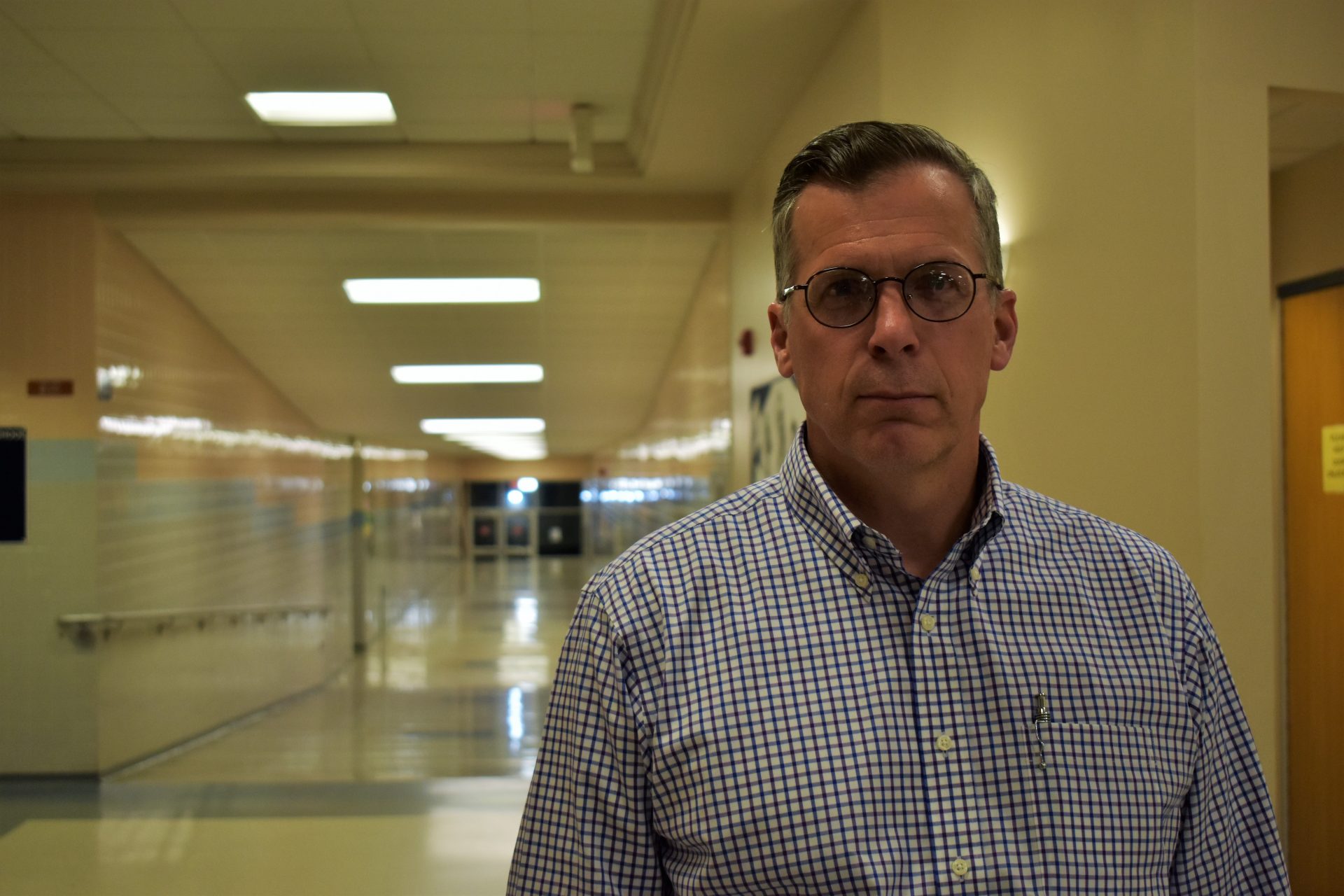 Stu Martin, a father of two children in the Eastern Lancaster County School District, attended a school board meeting on April 15, 2019.

What does the Pennsylvania School Boards Association recommend?

The opposite of what Eastern Lancaster County school board members approved.

The association recommended that if students are uncomfortable using the same changing and bathroom facilities as transgender students, then those uncomfortable students should have access to single-user or partitioned areas.

What has happened in other court cases?

Multiple court cases have gone in favor of transgender students, including two high-profile ones in Pennsylvania.

In 2016, the Pine-Richland School District in Allegheny County passed a policy that said students must either use unisex bathrooms or the school bathrooms of their ŌĆ£biological sex.ŌĆØ

Three transgender students sued with the assistance of an organization called Lambda Legal.

A federal district court temporarily blocked enforcement of the policy, and the two sides reached a settlement that Lambda Legal says prohibits the district from ever barring transgender students from using the bathroom that matches their gender identity.

The district also agreed to pay three transgender plaintiffs — who had since graduated — $20,000 each, plus $75,000 for attorney costs, the Pittsburgh Post-Gazette reported after obtaining the information through a Right-to-Know request.

Omar Gonzalez-Pagan, an attorney with Lambda Legal, represented the plaintiffs in the case. He said the policy that Eastern Lancaster County passed Monday is the same as what Pine-Richland attempted.

ŌĆ£If they were to look at the case law, there is no wiggle room,ŌĆØ Gonzalez-Pagan said.

In another Pennsylvania case, the Boyertown Area School District in Berks and Montgomery counties was sued by students over its policy of allowing transgender students to use the bathrooms and locker rooms that match their gender identity.

A federal district court and an appeals court ruled in favor of the district, and the wins were seen as victories for transgender rights. In November, the plaintiffs filed a petition, asking the U.S. Supreme Court to review the ruling.

That means the board will have the opportunity to change the policy or delay it further.

The school board president, Glenn Yoder, said he wasnŌĆÖt going to comment about a potential lawsuit. ŌĆ£IŌĆÖm hoping that everybody in the community decides to work collaboratively,ŌĆØ Yoder said. 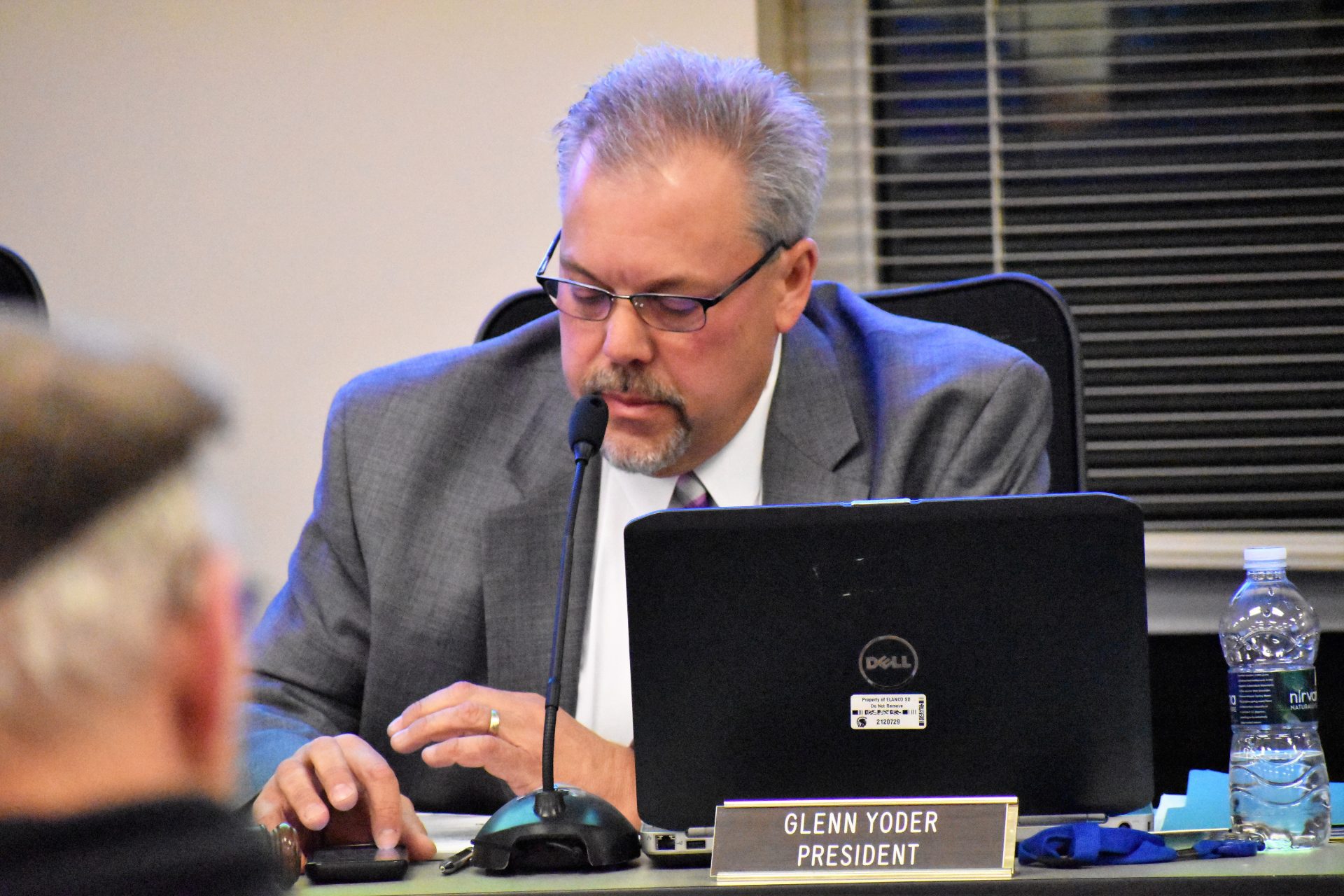 Glenn Yoder, president of the Eastern Lancaster County school board, voted in favor of a “biological sex” policy on April 15, 2019.

Jason Landau Goodman is executive director of the Pennsylvania Youth Congress, which advocates for LGBTQ people. He said members of his organization have talked with students and families in the district about a potential lawsuit.

He said the district still has a chance to reverse the policy in May.

ŌĆ£There is a threat of imminent harm to students here who, come next month, will be forced into the bathroom and locker room that are unsafe and completely harmful to them,ŌĆØ Landau Goodman said.

An entrance to Garden Spot High School in the Eastern Lancaster County School District is seen on March 14, 2019.