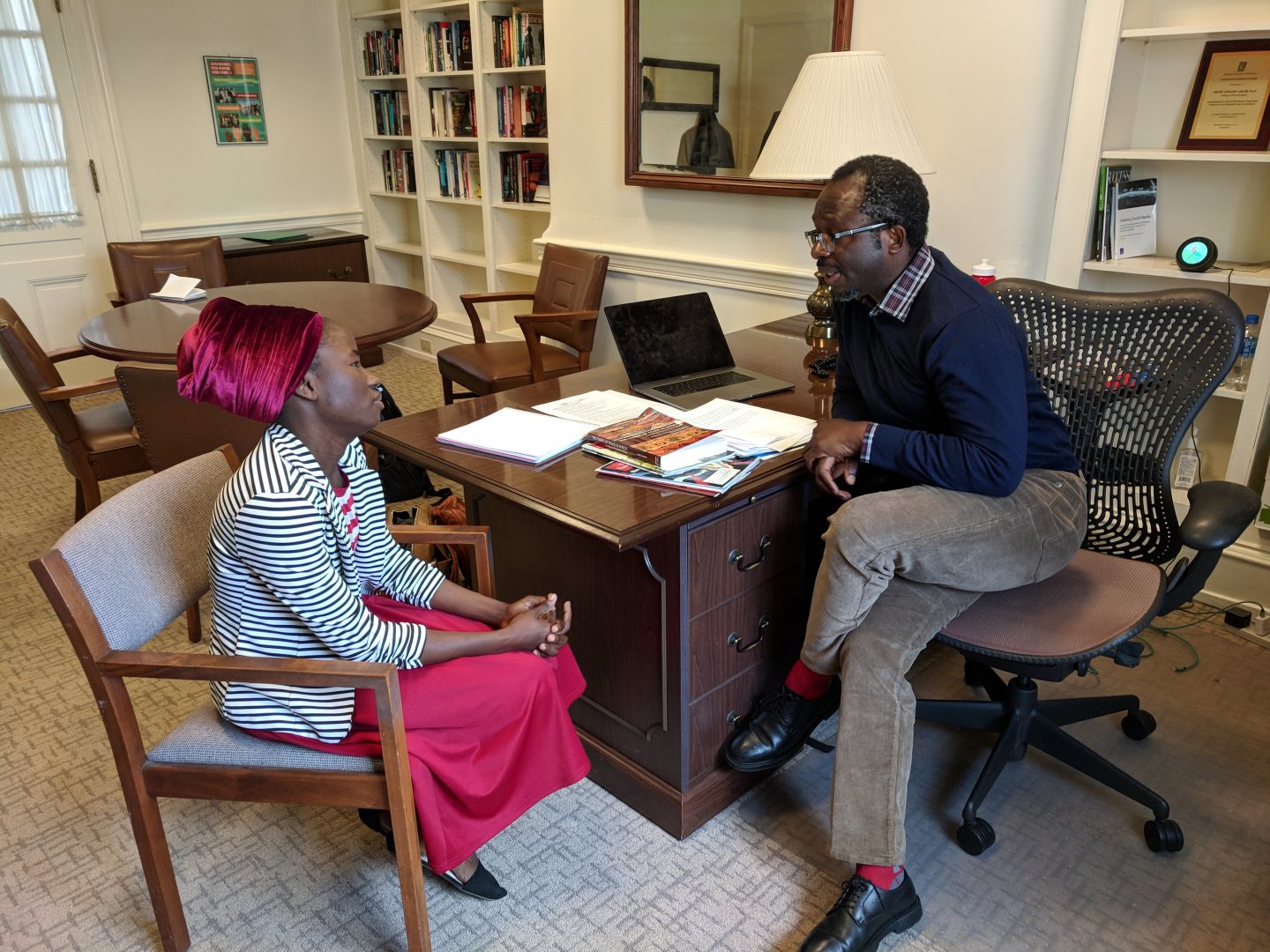 (Carlisle) – Patience Bulus could be just another student walking across the Dickinson College quad on her way to the library.

At age 22, she’s older than most undergrads, though she looks younger. Her slight frame belies the incredible strength of spirit that brought her from northern Nigeria to Pennsylvania.

Bulus is one of four women rebuilding their lives through a special college preparatory program at Dickinson after having been torn from their education by Boko Haram.

She was among the 276 schoolgirls kidnapped in Chibok, Nigeria by the terrorist group on the night of April 14, 2014. The incident drew international attention and launched the #BringBackOurGirls campaign.

She was also one of the 57 girls who quickly escaped captivity by jumping out of moving trucks and running in the dark into the bush.

Bulus doesn’t talk about that trauma. She wrings her hands and her chin often trembles as she reflects on what’s brought her to this point.

But her voice strengthens when she speaks about the 112 Chibok girls–and many others–who are still missing.

“Boko Haram used to post the videos and talk about them,” she said. “But now we don’t even know, like, where they are and what kind of situation they are in.”

Patience Bulus smiles as she works on an assignment. Bulus is one of four women once kidnapped by Boko Haram who are enrolled in a special program at Dickinson College.

Professor Jacob Udo-Udo Jacob, a visiting scholar from Nigeria, is helping Bulus and her three classmates in the Bridge Program get ready for university-level courses.

Jacob was teaching in Nigeria during the height of Boko Haram’s insurgency. He developed classes for students displaced by the terrorist group that could be broadcast over the radio.

He said he felt that program could be adapted to help these women.

“The concept of the Bridge Program really wasn’t just to have a program in the sense that it provides that bridge between no education and college, but it was also bridging experiences; bridging a traumatic experience and future that we felt these women deserve,” Jacob said.

The women not only escaped a dangerous situation in their home country but also struggled to adjust during their first four years in the United States.

Bulus’s parents died within months of her leaving, and she wasn’t getting the education she’d hoped for.

But she has always been determined to learn.

Dickinson College President Margee Ensign poses for a photo in her office. Ensign was the head of the American University of Nigeria when Boko Haram abducted 276 Chibok schoolgirls. Her work to get some of the escaped girls an education continues today.

The women were at a community college in New York when Nigerian government officials reached out to Dickinson College President Margee Ensign to see if she could help.

Ensign had valuable experience. She led the American University of Nigeria during the Chibok kidnapping and brought several escapees to the university to continue their education.

Ensign said, when she heard about these four women, “I was extremely upset because, here they come to America, and they didn’t get what they had been promised? So, it was a privilege to bring them here.”

Bulus and her three classmates arrived at Dickinson one year ago, but Jacob says their education was farther behind than administrators expected.

“The plan–the sort of academic plan we’d created–we just had to scrap that and start all over again,” he said.

“They inspire me, personally, and I think that they will also end up inspiring lot of other women in various parts of the world,” Jacob said.

Bulus hopes to become a counselor and help others who have gone through similar experiences. She was inspired by a blind woman who counseled her when she first came to America.

“If she can [be] able do that in her situation. Why don’t I forget what happened to me, too and start facing what [the] future can bring?” Bulus said. “It’s not that what is happening is not hurting me. But I don’t let it let me down, like it used to do before.”

Bulus is also using her voice to advocate for others. She said she wants governments around the world to do more to protect girls and their right to education.

“So that girls can have freedom to go to school and have jobs and do stuff like free men,” she said. “We all have equal rights. It’s God [that gives] us the right. Why [are] some people are taking that right because you’re a woman?”

Bulus is working on her college application and hopes to enroll at Dickinson this fall. She’s still deciding on a major, considering psychology and sociology as well as international relations and political science.

Most importantly, the choice is up to her.

Radon in schools? Bill would begin to mandate testing in radon-dense Pa.