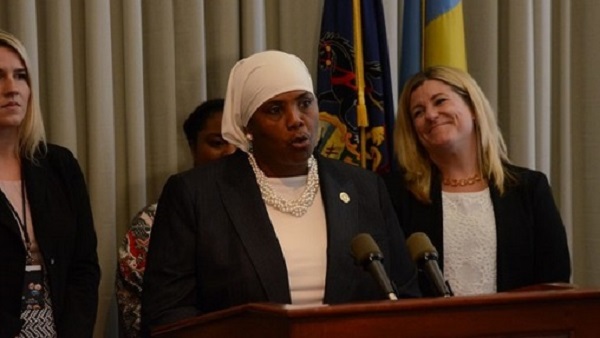 Movita Johnson-Harrell, shown here while she was supervisor of the Philadelphia district attorney’s Victim/Witness Services unit. An invocation given before Johnson-Harrell’s swearing-in to the state House was broadly construed as Islamophobic. (Tom MacDonald/WHYY)

(Harrisburg) — The first female Muslim member of the state House of Representatives said Tuesday she was offended by a colleague’s decision to open a voting session with a prayer a day earlier that “at the name of Jesus every knee will bow.”

Democratic Rep. Movita Johnson-Harrell of Philadelphia said she felt the remarks by Rep. Stephanie Borowicz shortly before Johnson-Harrell took the oath of office on Monday used her religion against her.

“I thought that for the most part, the entire invocation was offensive,” Johnson-Harrell told reporters, noting that her own religion respects Jesus. “But to use Jesus as a weapon is not OK.”

Borowicz, a Republican and associate pastor’s wife who was elected to represent a rural central Pennsylvania district in November, also thanked President Donald Trump during the Monday invocation for standing behind Israel.

Johnson-Harrell said she respects everyone’s right to praise the president, but “we cannot weaponize what’s going on with Israel and Palestine.”

Prayer should not be among the things that Republicans and Democrats fight about, she said.

“It was directly a political statement, and I think we need to be very, very clear that everybody in this House matters, whether they’re Christian, Muslim or Jew, and that we cannot use these issues to tear each other down,” Johnson-Harrell said. “And not only that, it was made during my swearing in.”

Johnson-Harrell won a special election earlier this month to fill a seat vacated by the resignation of Democratic Rep. Vanessa Lowery Brown, who had been re-elected in November after being convicted of bribery.

Her swearing-in drew 55 guests, a majority of them Muslim. A Muslim prayer was said from the House dais during the ceremony.

Borowicz defended her remarks Monday, saying, “I pray every day. I prayed.” She did not immediately return a message seeking a response to Johnson-Harrell’s comments Tuesday.

“At the name of Jesus every knee will bow and every tongue will confess, Jesus, that you are Lord,” Borowicz said on Monday.

Her floor remarks drew a rebuke from Democratic Leader Frank Dermody of Allegheny County, who called Borowicz’s invocation “beneath the dignity of this House” and asked that a group be set up to review the procedure.

Democratic Gov. Tom Wolf said Tuesday he was “horrified” by Borowicz’s invocation and apologized to Johnson-Harrell on behalf of all Pennsylvanians.

“I was horrified. I grew up in Pennsylvania. Pennsylvania was founded by William Penn on the basis of freedom of conscience. I have a strong spiritual sense. This is not a reflection of the religion I grew up in,” said Wolf, a Methodist.

Another Muslim lawmaker, Rep. Jason Dawkins, D-Philadelphia, opened the session on Tuesday by reading from the Quran. His invocation was followed by applause.

House Speaker Mike Turzai, R-Allegheny, who controls the daily invocation process, lost a federal court decision last summer that halted his policy of preventing nonbelievers from making the invocations. Turzai is appealing that ruling , and currently has the invocations performed by state representatives themselves.

After Borowicz’s comments on Monday, Turzai read for House members the guidance that has previously been provided to religious professionals about keeping remarks respectful of all religious beliefs and refraining from commenting on extraneous matters.