An opening ceremony for "The Long Road to LGBTQ+ Equality in Pennsylvania" took place on March 18 in the state Capitol. The exhibit will be on display in the East Wing Rotunda until March 29.

A central Pa. woman says a 1970s eviction for being gay motivated her push for nondiscrimination ordinance in Harrisburg

"The Long Road" exhibit opened on Monday at the state Capitol. 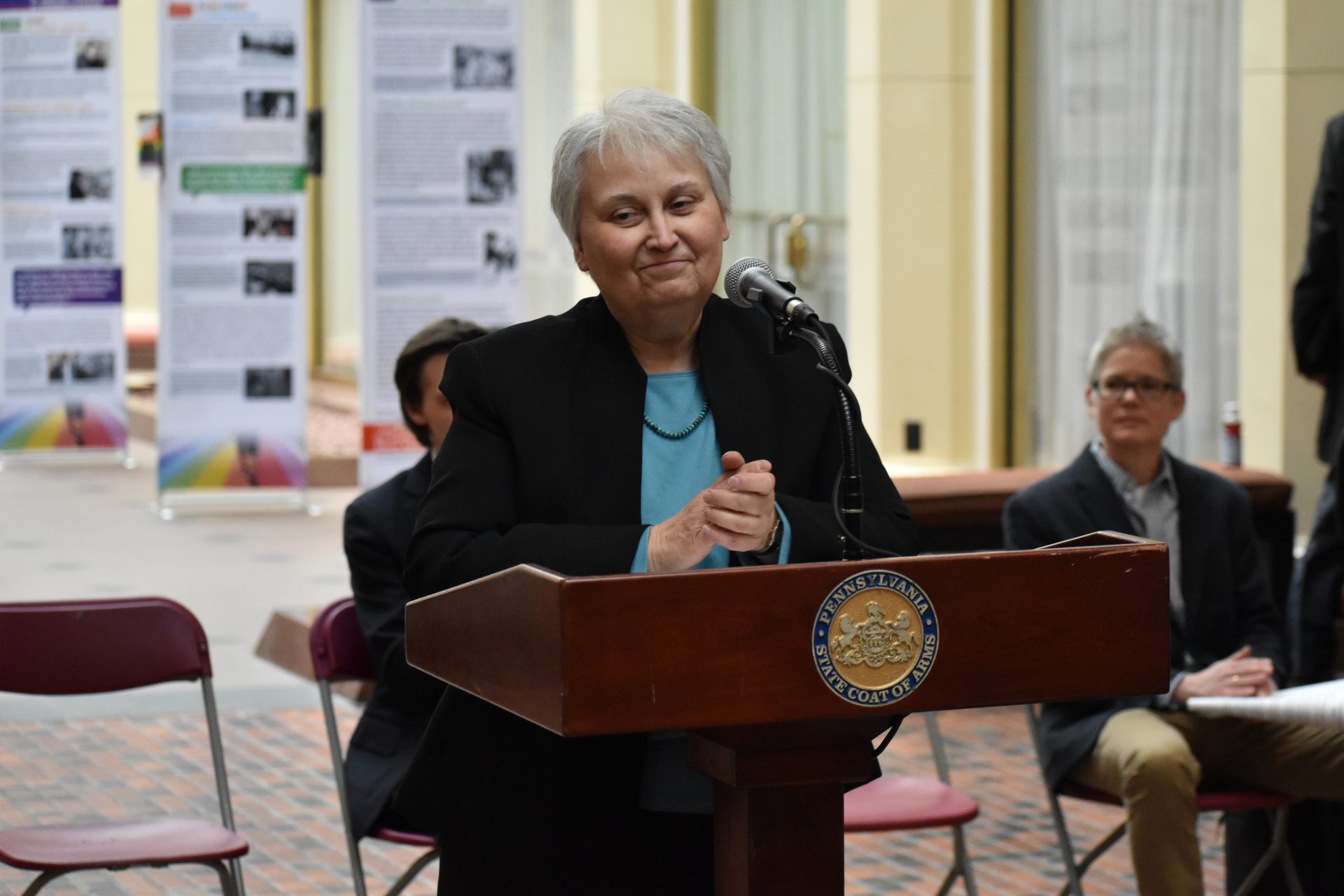 Mary Nancarrow, who advocated for a nondiscrimination ordinance in Harrisburg in 1983, speaks during the opening ceremony for “The Long Road to LGBTQ+ Equality in Pennsylvania.”

In the mid-1970s, Mary Nancarrow was a student at Shippensburg University and living off campus with another woman.

Nancarrow and the woman were in a relationship. And Nancarrow says that led to problems for both.

“One day, the landlord came knocked on the door and said, ‘You need to be out by the end of the month,’” Nancarrow recalled.

Nancarrow says she and her partner pressed him about why. They had, Nancarrow says, paid the rent and taken care of the place.

“He stammered and then finally said, ‘It’s because of your relationship,’” Nancarrow said.

At the time, Pennsylvania and its municipalities had no laws protecting people from discrimination based on sexual orientation and gender identity. Nancarrow has pushed to change that.

After college, she moved back to the Harrisburg area. She took a state government job because she knew that Gov. Milton J. Shapp, in 1975, had signed an executive order banning discrimination on the basis of sexual preference — language that was later changed to ban discrimination based on sexual orientation.

For Nancarrow, that executive order provided a level of security.

And the eviction provided a motivation.

While in Harrisburg, Nancarrow advocated for a nondiscrimination ordinance.

“There was scary and vehement opposition,” Nancarrow said.

But there was also support. And in 1983, Harrisburg City Council members unanimously passed the nondiscrimination ordinance. It was the second city in Pennsylvania to pass such an ordinance.

Nancarrow spoke at the state Capitol on Monday as part of a grand opening ceremony for an exhibit called “The Long Road to LGBTQ+ Equality in Pennsylvania.” The exhibit was released this year in honor of the 50th anniversary of the 1969 Stonewall riots in New York City.

Barry Loveland, a gay man who previously worked for the Pennsylvania Historical and Museum Commission, curated the exhibit.

“A lot of people stuck their necks out in those early days to try to achieve civil rights,” Loveland said. 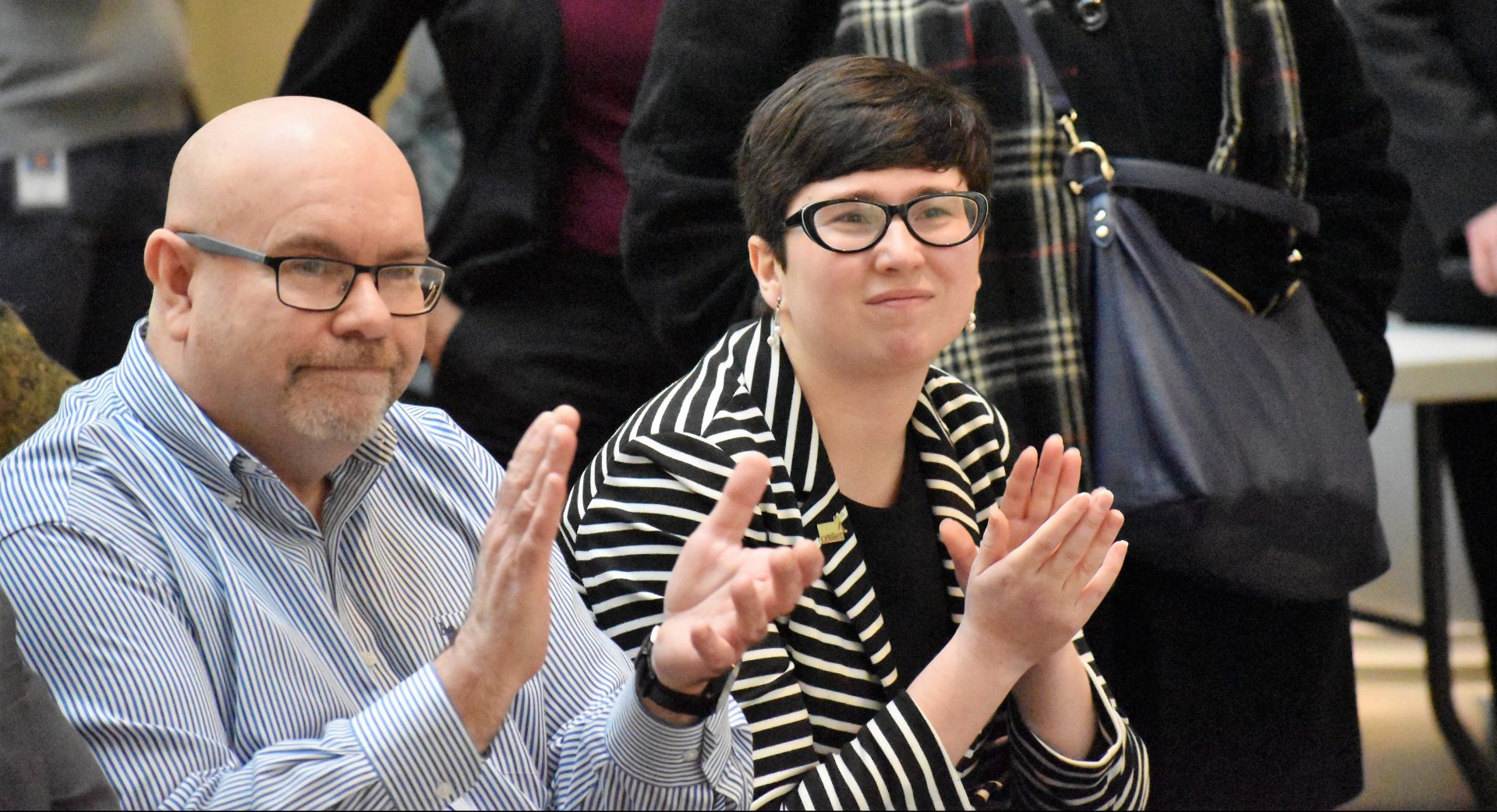 Barry Loveland, curator for the exhibit, and Amanda L. Arbour, executive director of the LGBT Center of Central PA, applaud during a ceremony for the opening of “The Long Road to LGBTQ+ Equality in Pennsylvania.” The ceremony was on March 18, 2019.

Last year, the Pennsylvania Human Relations Commission said it would accept complaints based on sexual orientation and gender identity as a form of sex discrimination. But some people want lawmakers to explicitly add protections into state law for housing, employment and public accommodations.

Multiple speakers called for that action during Monday’s ceremony.

“While having a statute certainly will not eliminate bias, it is a powerful declaration that discrimination in our towns and throughout Pennsylvania will not be tolerated,” Nancarrow said.

The exhibit will be on display in the East Wing Rotunda of the Capitol until March 29. And three copies of the exhibit will travel throughout Pennsylvania this year.

For more information on the exhibit, visit The Long Road exhibit website. 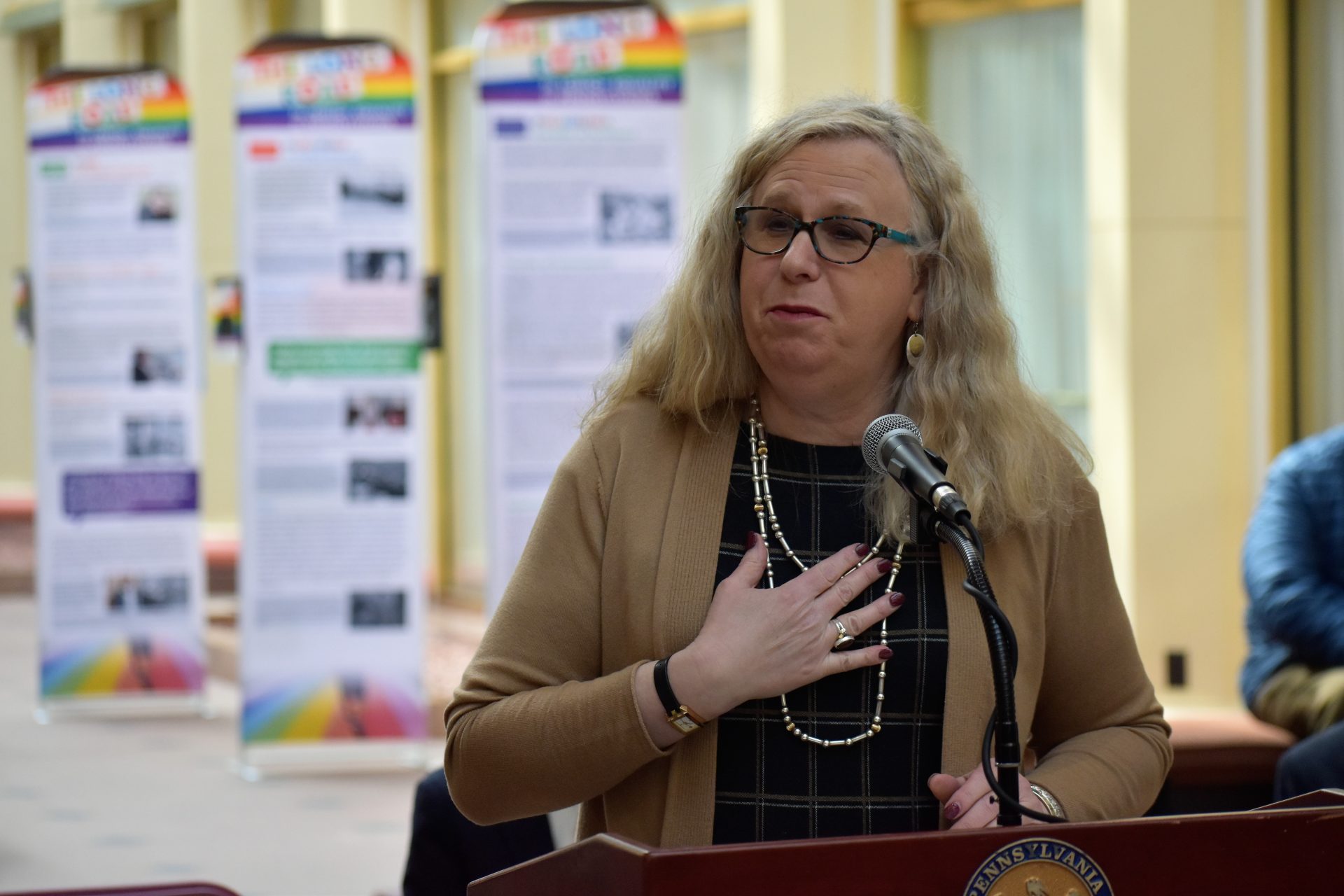 Starting today, Pennsylvanians can apply for pardons for free