Support for legal marijuana defies party politics in Pa. — among residents, not lawmakers

“I don’t think there’s any chance this passes this session." 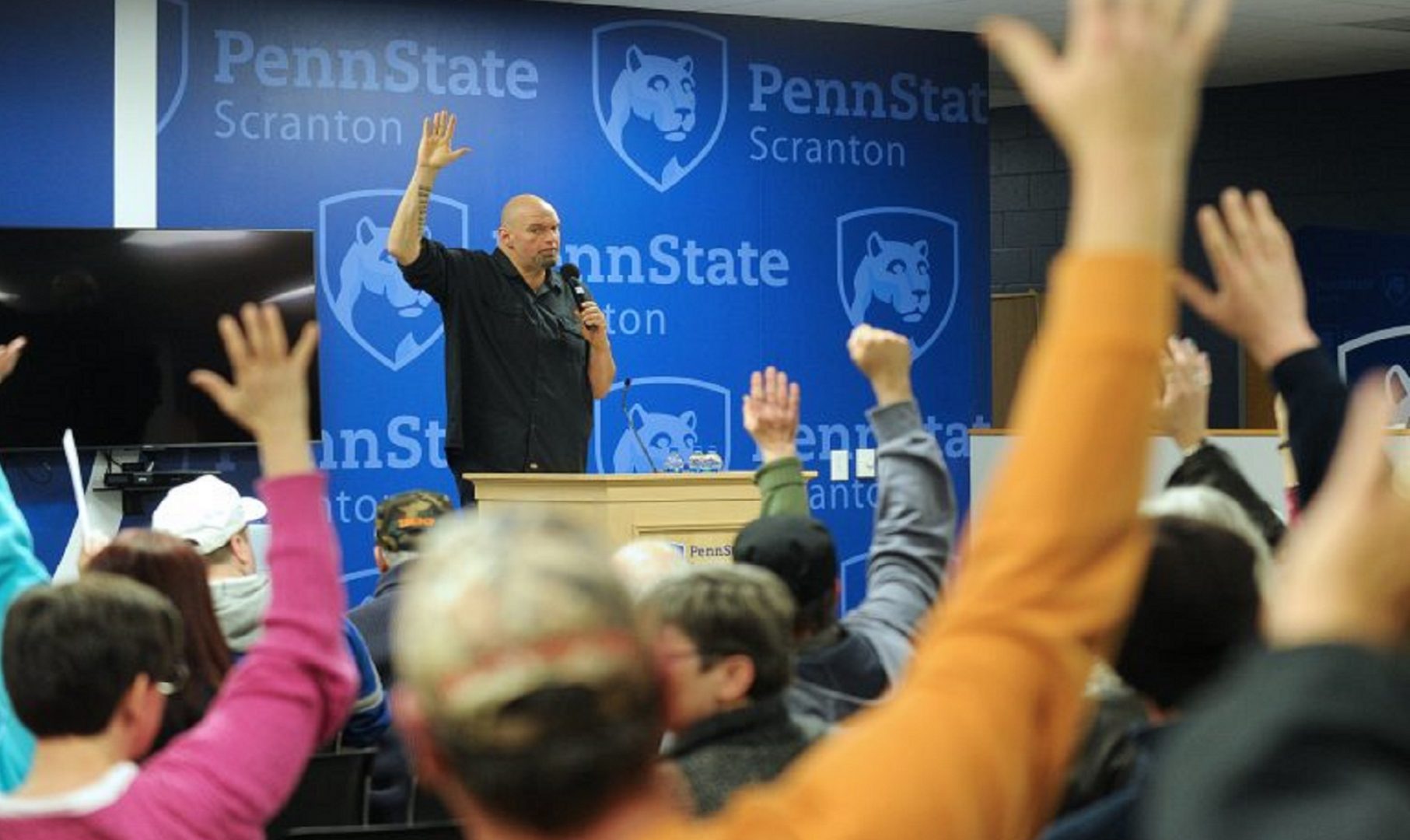 (Dunmore) — John Witzgall and Bob Bolus have a lot in common.

Beyond retirement age and living in the Scranton area, they both voted for Donald Trump in 2016.

But when it comes to legalizing marijuana in Pennsylvania, they are miles apart.

“If you get arrested for that one lousy joint in Lackawanna County, you got a good chance you’re gonna do time,” said Witzgall, who used to be a correctional officer. “So you wanna protect your kids? Decriminalize marijuana.”

Witzgall delivered this message while speaking at a “Statewide Recreational Marijuana Listening Tour” tour hosted by Lt. Gov. John Fetterman. The majority of those who turned out recently in Lackawanna County raised their hand when asked if they would support legalizing weed.

It’s a scene that’s been repeated in many counties across the state in recent weeks, from Cumberland to Clearfield, Schuylkill to Westmoreland  — with majorities in Republican-leaning counties favoring legalization.

Detractors, like Bolus, have been in the minority, but say the potential consequences outweigh any benefit.

“If an eighteen-wheeler came down and ran into you while you were in your car and [the driver] was smoking a joint before and after and wiped out half your family and crippled you for the rest of your life,” Bolus said. “Would you raise your hands?” Bob Bolus, of Scranton, voices his disapproval with recreational use of marijuana during Fetterman’s Lackawanna County stop.

Many more people in Pennsylvania have been raising their hands recently.

In 2006, according to a Franklin and Marshall poll, about 20 percent of residents backed the idea. The number now is around 60 percent.

Nationally, there’s been a massive culture shift in that time. Since 2012, ten states and the District of Columbia have legalized recreational pot.

None of those include states that border Pennsylvania, but New York and New Jersey seem poised to make it happen.

In Pennsylvania, though, it is a different story.

Gov. Tom Wolf and the Republican-controlled legislature agreed to legalize medical marijuana in 2016, but Wolf only began signaling his support for recreational marijuana after winning re-election in the fall.

Advancing this idea, though, will require winning support from lawmakers on both sides of the aisle who remain skeptical, with Republican leaders standing firmly against.

State Rep. Jake Wheatley, D-Allegheny County, recently introduced a bill that would legalize weed, tax it at around 35 percent and use the revenue on workforce development, community mentoring programs and student debt forgiveness.

Wheatley said the new funding could also help chip away at the state’s $1.7 billion budget deficit.

“We believe we will easily be between $580 million to $600 million new dollars recurring every year,” Wheatley said.

His bill has 27 co-sponsors — all Democrats.

Opposition seems stiff among Republicans in the Senate as well.

“I don’t think there’s any chance this passes this session. I will do whatever I can as a leader to not allow it to happen this session,” said Majority Leader Jake Corman, R-Centre. “I know public support has moved on this, and that’s certainly understandable. But at the same time, I think the evidence from the states that have done it certainly isn’t compelling. I think we should take a go-slow approach.”

Corman says he has an open mind. He was adamantly against medical marijuana, but later supported it.

“We all evolve. We all educate ourselves,” Corman said. “Maybe this is down the line. I don’t know.”

Like Corman, they say as long as marijuana remains illegal under federal law, Pennsylvania should stay on the sidelines.

“Dermody also feels it’s important for the federal government to remove cannabis from the list of Schedule 1 drugs so that the industry can function more freely within the law,” spokesman Bill Patton said.

On his 67 county tour, Fetterman says he’s hearing from many residents who want the state to act now. And behind the scenes, operatives say this is real reason the lieutenant governor is trekking hundreds of miles in every direction of the state:  to build an overwhelming amount of anecdotal evidence in hopes of converting doobie doubters.

“I want to be clear: some very conservative counties. I would peg that support as a little bit higher based on the rooms and our online feedback,” he said.

Wheatley admits: his bill is likely to die this session. Still, he hopes the conversation it starts will force skeptics to reconsider.

“I think there’s still this negative, false stigma that somehow being ending this prohibition makes you soft on crime. Or that you’re somehow continuing the moral decay of our society,” he said.

“And then see our population run across the border and spend their hard-earned dollars in other states,” Wheatley said.

The tough thing about this debate — both in Pennsylvania and nationally — is the lack of comprehensive scientific research.

In recent months there have been high profile reports that have cautioned against legalization — and others that have emphasized the idea that alcohol and tobacco are much more dangerous.

But that’s the hitch: as long as marijuana remains classified as “illegal and dangerous” under federal law, there will be restrictions on how much it can be studied.

And so, for now, even as Fetterman gathers support from the Delaware to the Monongahela, the debate in Pennsylvania remains in this catch-22.

“If this is truly, scientifically not as harmful as it was thought of decades ago,” said Majority Leader Corman, “then [Congress] ought to move on that.”

Cash for the poor? General Assistance welfare again under threat in Pa.