Many districts in southwestern Pennsylvania would receive money under a proposal to raise all school district salaries to at least $45,000 a year.

A $45,000 minimum salary for teachers, explained 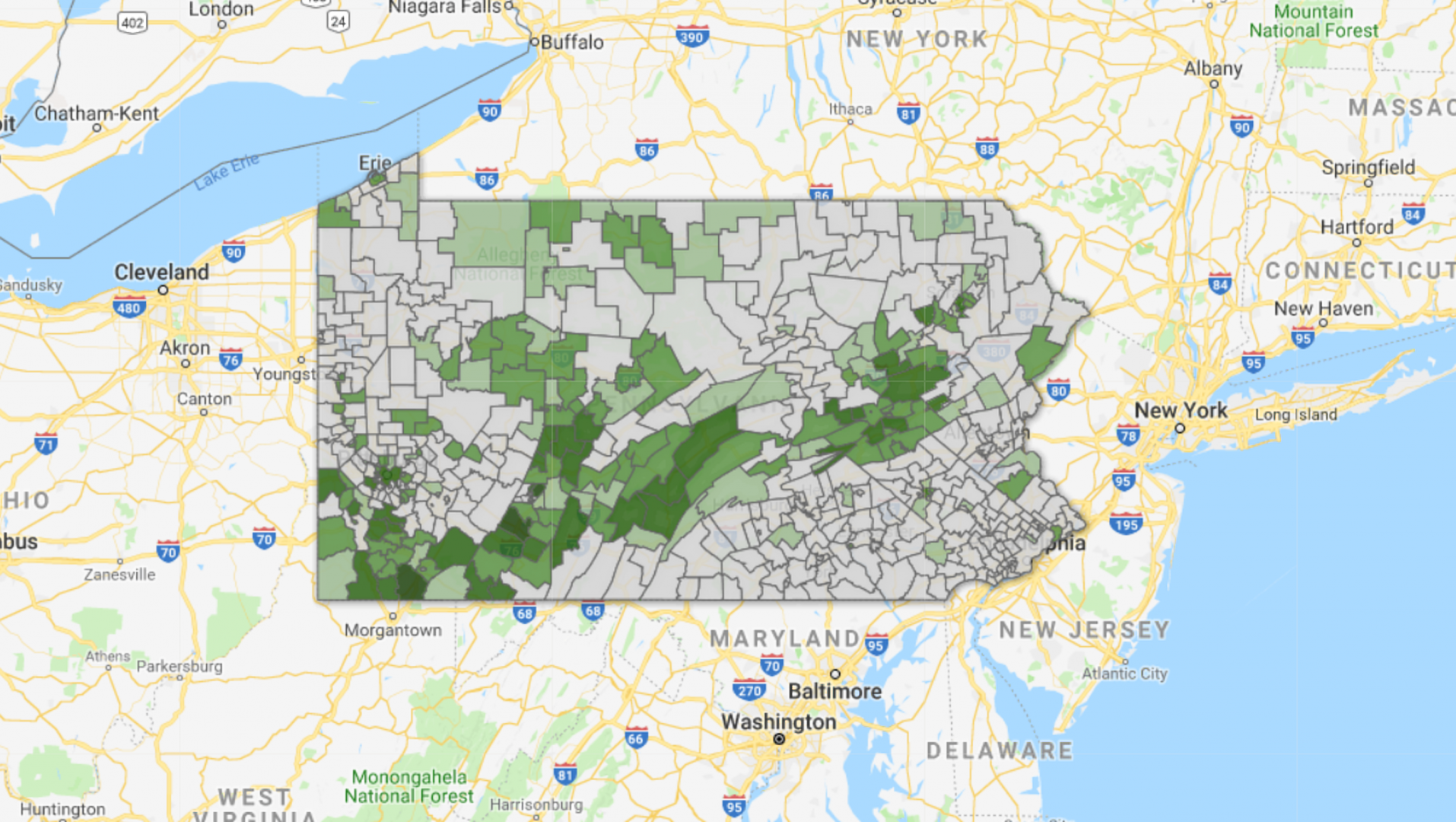 Many districts in southwestern Pennsylvania would receive money under a proposal to raise all school district salaries to at least $45,000 a year.

Gov. Tom Wolf wants every school district teacher in Pennsylvania to earn at least $45,000 a year.

He proposed the idea during his annual budget address this month. Here’s what you need to know about the idea.

How much do teachers earn now?

The average classroom teacher in Pennsylvania had a salary above $67,000 last year. But salaries vary widely across the state.

State law only requires a minimum teacher salary of $18,500.

In five Pennsylvania school districts, the average classroom teacher — not just ones at the bottom of the pay scale — had a salary below $45,000 last year.

Across the state, 180 out of 500 Pennsylvania school districts would receive money to raise the minimum salaries above $45,000.

Which districts would benefit?

The map below gives you an idea.

A lot of districts that benefit are in rural parts of the state. The five districts that would receive the most money are in Cambria, Somerset and Fayette counties.

But some districts in more urban areas, such as Scranton and Reading, would benefit.

Most districts in the Philadelphia suburbs and southcentral Pennsylvania wouldn’t receive money under the proposal.

How much would the proposal cost?

Nearly $14 million for one year, according to the Wolf administration.

That’s a relatively small amount when it comes to state money K-12 education — the state expects to spend about $6 billion on its basic education subsidy this year.

The state money would cover salary increases, plus costs that rise as someone’s salary increases: retirement contributions, as well as Social Security and Medicare taxes. That’s according to Rick Levis, a spokesperson for the Pennsylvania Department of Education.

The chairman of the state Senate Education Committee, Ryan Aument, said a lot of his Republican colleagues weren’t very enthusiastic about the idea when Wolf proposed it. That includes Republicans who represent school districts that would receive extra money, the Lancaster County Republican said.

“My sense is there was a lot of concern,” Aument said.

The Pennsylvania Association of School Business Officials opposes the measure. Jay Himes, executive director of the group, pointed to regional differences in the cost of living as a reason why pay differs.

And he said the teachers can bargain for higher salaries during local contract negotiations.

“Everybody gets a fair shot at it,” Himes said.

Who supports the proposal?

So does the state’s largest teachers union, the Pennsylvania State Education Association.

What’s the argument against the proposal?

One of the biggest objections to the idea is to its potential ripple effects.

He’s the former chief executive of the Pennsylvania Manufacturers’ Association, a powerful business group in Harrisburg.

Panyard, in his words, once had “a quixotic run for the gubernatorial nomination for the Republican Party, which fell drastically short.” He dropped out before the 2006 primary.

In his Listening Post question, he asked what would happen to all the teachers already earning above $45,000. He thinks he knows the answer.

“It has a ripple-up effect, if you will, to jack everyone else’s salaries up,” Panyard said.

Aument, the chairman of the Senate Education Committee, raised the same concern.

Teacher salaries are generally negotiated between school boards and unions based on an educator’s years of service and degrees earned.

If the state raises the floor to $45,000 a year, then it’s reasonable to expect that will influence contract negotiations, Aument said.

For instance, if teachers with 10 years of experience are earning $45,000 in one district, they would likely not want to earn the same as a first-year teacher in the district.

Marc LeBlond, a senior policy analyst with the conservative Commonwealth Foundation, argued that the best way to improve teacher salaries would be to increase competition among employers — by that, he means do more to encourage the number of charter school and private school options.

What’s the argument for the proposal? 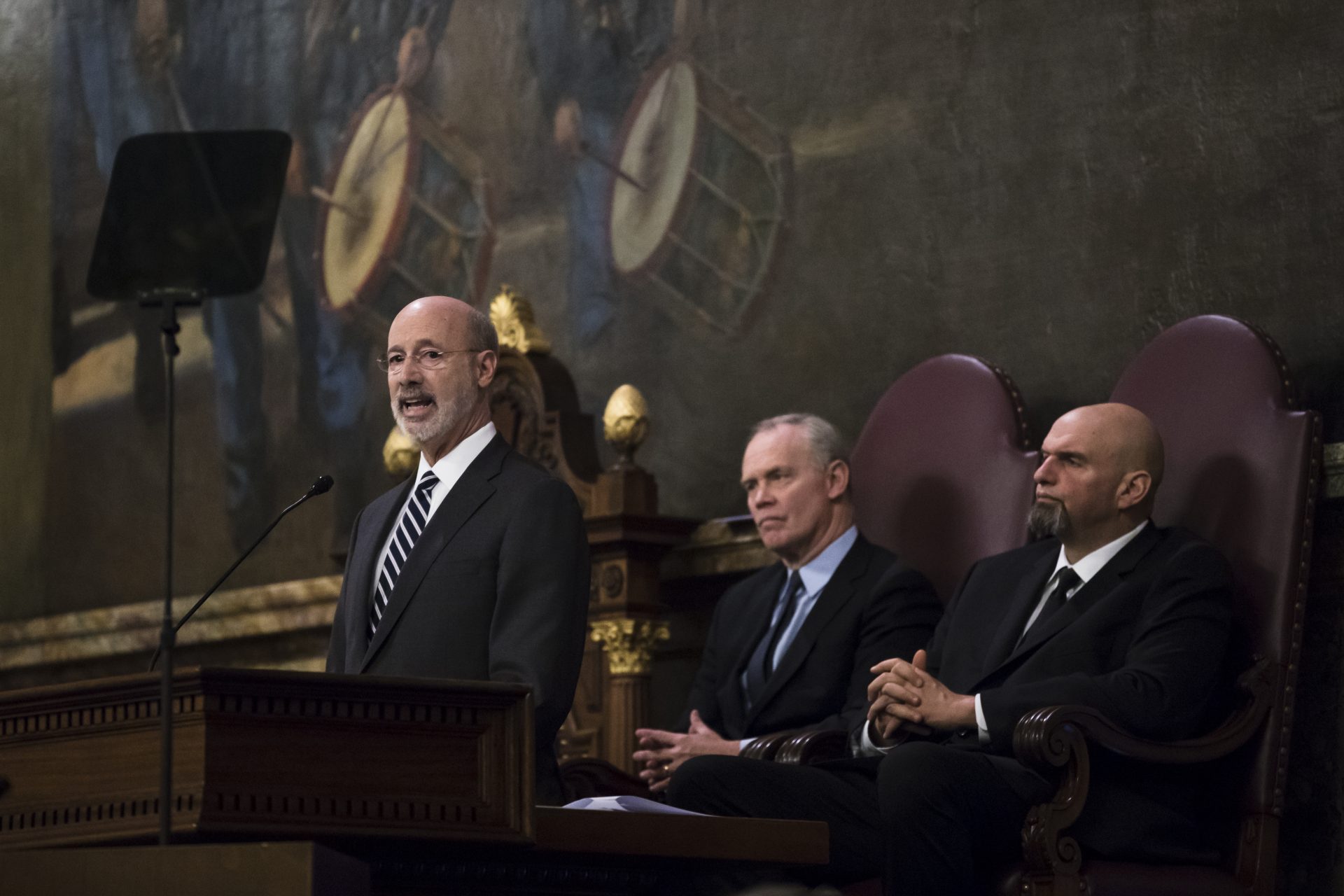 Democratic Gov. Tom Wolf, left, delivers his budget address for the 2019-20 fiscal year to a joint session of the Pennsylvania House and Senate in Harrisburg, Pa., Tuesday, Feb. 5, 2019. House Speaker Mike Turzai, R-Allegheny, is at the center, and Lt. Gov. John Fetterman is at the right.

In his budget address, Wolf said, “classroom teachers have too often been getting the short end of the stick.” He argued the proposal would help districts across the state, particularly in rural areas, compete to recruit and retain the very best professionals in education.

“This could be a game-changer for our schools,” Wolf said.

Meanwhile, a spokesman for the Pennsylvania State Education Association says teachers deserve a salary that is in line with others who have bachelor’s or master’s degrees.

“We shouldn’t have highly dedicated teachers who are strapped with student loan debt, who are unable to pay their bills or make ends meet,” PSEA spokesman Chris Lilienthal said.

He said demands and requirements have increased for teachers, and teachers are working with a higher percentage of students with special needs and English as a second language.

Shane Hazenstab, the superintendent of the Conemaugh Valley School District, said the salary money would “would obviously impact teacher morale” and “likely would lessen our teacher turnover.” His Cambria County district would receive a little over $693,000 — which is more than any other district in the state.

As for potential ripple effects, Levis with the Pennsylvania Department of Education said the governor has significantly increased education funding over the past four years. That money, he said, is going to support all of the state’s school districts, including local contract decisions.

What happens after the first year?

That was another question submitted to the Listening Post.

Wolf has said the proposal will be fully funded by the state.

Under Wolf’s proposal, the salary increase money would be built into the basic education funding that is the largest source of state funding for schools.

That money is subject to debate in the state Capitol each budget season. But Lilienthal with the Pennsylvania State Education Association is optimistic lawmakers would not cut it.

He said the basic education funding line has only been cut once in at least the last 30 years.

“The results of that cut were devastating to schools — something that many, many lawmakers saw firsthand in their local school districts and are not eager to repeat,” Lilienthal said in an email. “A basic education funding cut could happen in the future but is highly unlikely.”

Who is covered by the proposal?

Overall, about 3,200 people, according to the Pennsylvania Department of Education.

It goes beyond classroom teachers and covers other professional staff members, such as school nurses, library specialists and counselors.

Who is not covered by the proposal?

Neither are teachers in charter schools.

This is misleading, at best. The Charter Law excludes charter schools from meeting teacher salary requirements, not our proposal, which raises the threshold for existing requirements.

Glad to have your support for raising teacher salaries! https://t.co/4PpErlV2Uk

Charter schools are public schools. But Ana Meyers, executive director of the Pennsylvania Coalition of Public Charter Schools, told The Morning Call of Allentown that it’s a good thing charter schools aren’t covered by the same salary requirements as districts.

Charter schools were designed to have greater flexibility than traditional public schools, she said.

Teacher salaries in charter schools are typically lower than in public school districts.

Across the state, there were nearly 50 charter schools where the average classroom teacher had a salary of less than $45,000 last year.

How do teacher salaries in Pennsylvania compare to other states?

The National Education Association has some data on this. The national teachers union says:

But, again, there is a wide variety among school districts. Pennsylvania’s school funding system and disparities between rich and poor districts is the subject of a lawsuit. A trial is scheduled for 2020.

The proposal is expected to come up during budget hearings for the Pennsylvania Department of Education.

Those hearings are scheduled for March 4 in the House and March 5 in the Senate.