The control room at Peach Bottom Atomic Power Station is seen on Feb. 19, 2019.

Can the station last 80 years?

The Three Mile Island nuclear power plant might close down this year.

But about 50 miles south, operators of another nuclear power station hope to stay in business until at least 2053.

The Peach Bottom Atomic Power Station sits in a rural part of southern York County amid farms and tiny towns. Like Three Mile Island, it’s on the Susquehanna River — these plants need a lot of water.

Peach Bottom’s two active nuclear reactors began operating in 1974. Originally, the reactors each had a license to last 40 years. Those licenses were later renewed for another 20 years.

Now, the plant is among the first in the nation to seek a second license renewal.

“There’s a lot of life left in places like this,” said Matt Wald, a spokesman for the Nuclear Energy Institute, a trade association that advocates for nuclear power. 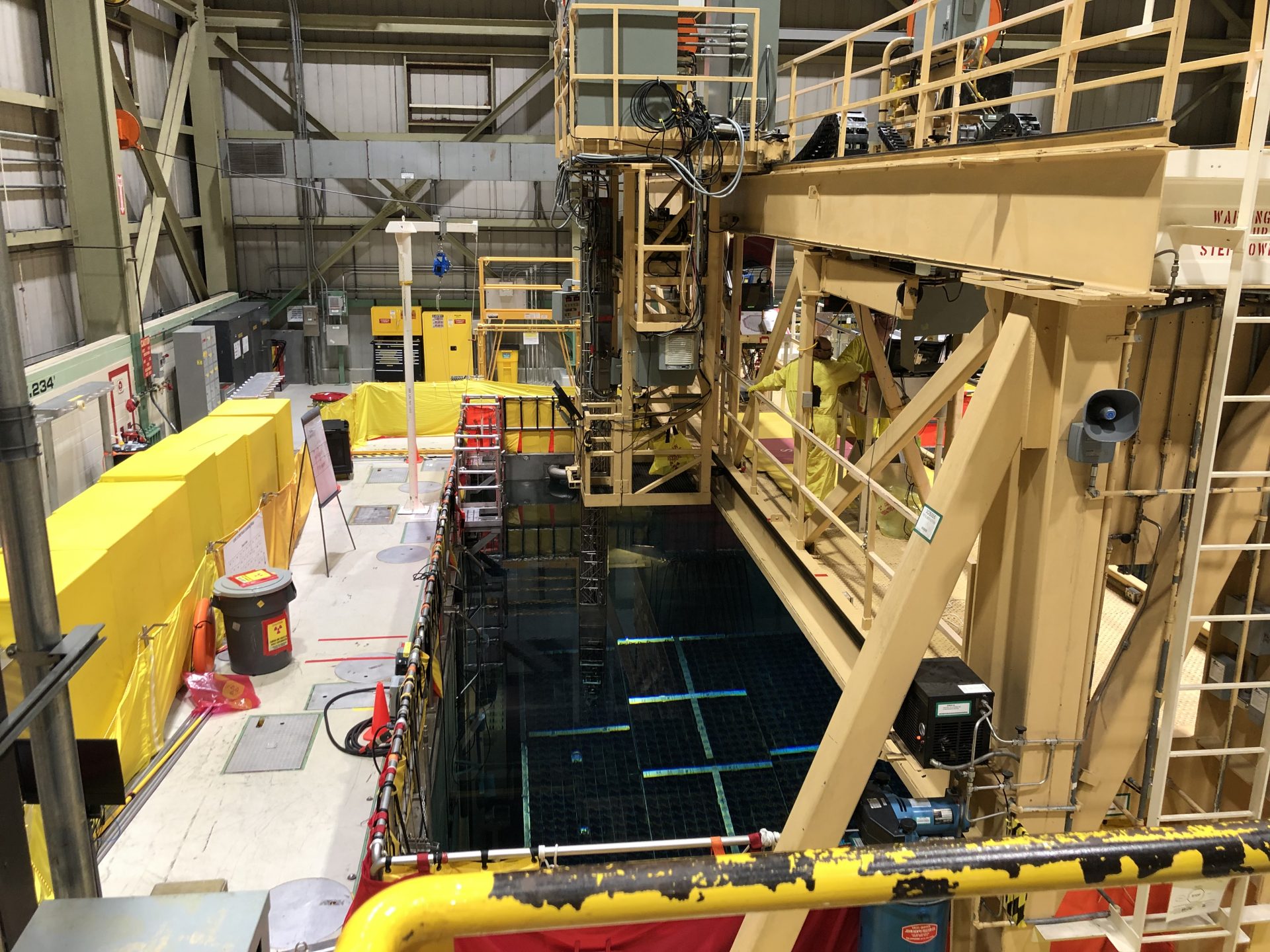 With that license renewal looming, Wald and officials from Exelon organized a media tour of the Peach Bottom nuclear plant on Tuesday.

During most of Tuesday’s tour, Exelon officials focused on how the Peach Bottom plant benefits consumers, workers, people in the community and, more broadly, the environment. Nuclear power reactors don’t produce direct air pollution or carbon emissions while operating.

There are environmental trade-offs. The possibility of a disaster looms large in the nuclear debate, although officials in the nuclear industry stress all the safety precautions and regulations that exist. 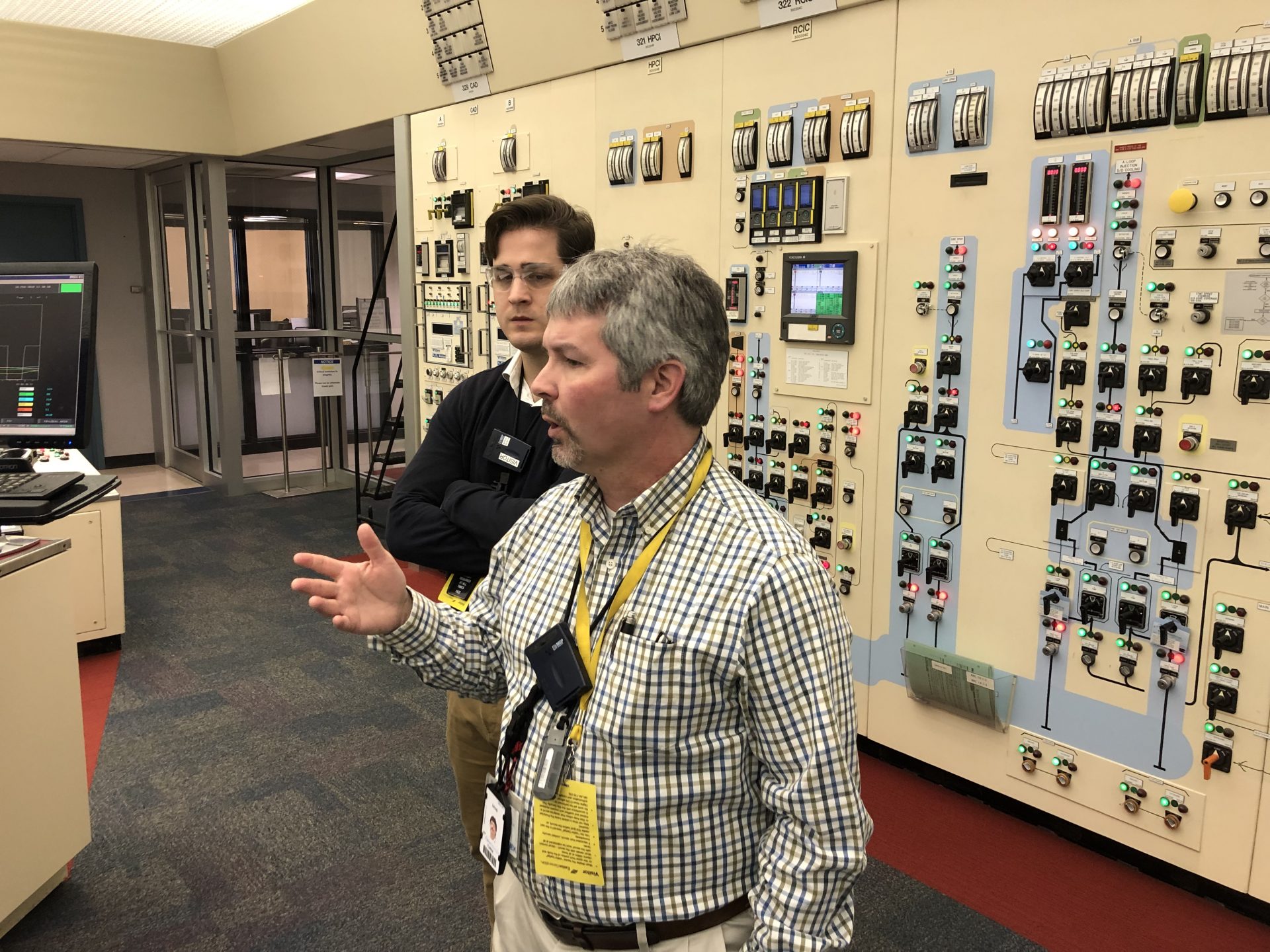 David Turek, who is responsible for security training and emergency preparedness at Peach Bottom Atomic Power Station, is seen in the control room on Feb. 19, 2019.

There’s also the question of where to store radioactive waste.

That has led Peach Bottom to store its spent fuel on site.

Right now, there are 89 large white containers that store spent fuel on a Peach Bottom storage pad. That storage pad has space for 92 containers.

On Tuesday, construction crews were at work, drilling and digging to create a flat space to store more of those containers. That project is scheduled to be completed by 2020, and it would create enough space to last until 2034. 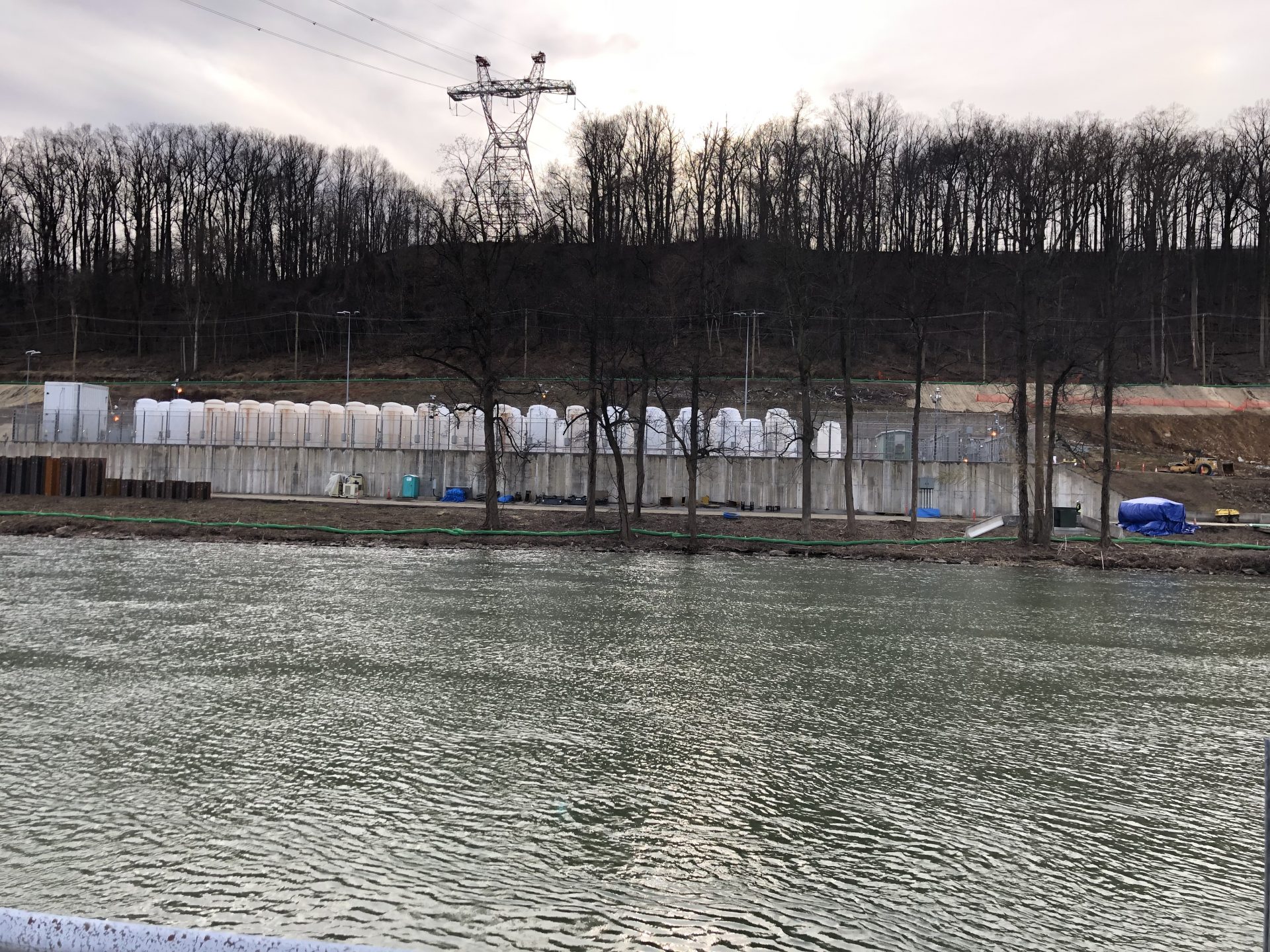 A storage pad for spent fuel is seen on the grounds of Peach Bottom Atomic Power Station on Feb. 19, 2019.

After that, Navin said that while operators would prefer to have the spent fuel sent elsewhere, they have enough room on the Peach Bottom property to build more storage space.

Exelon has said it will close TMI this year. In western Pennsylvania, the operator of Beaver Valley Nuclear Power Station plans to close it in 2021.

Some lawmakers have argued that without changes in state law, Pennsylvania’s other three nuclear power plants — including Peach Bottom — would likely be in danger. 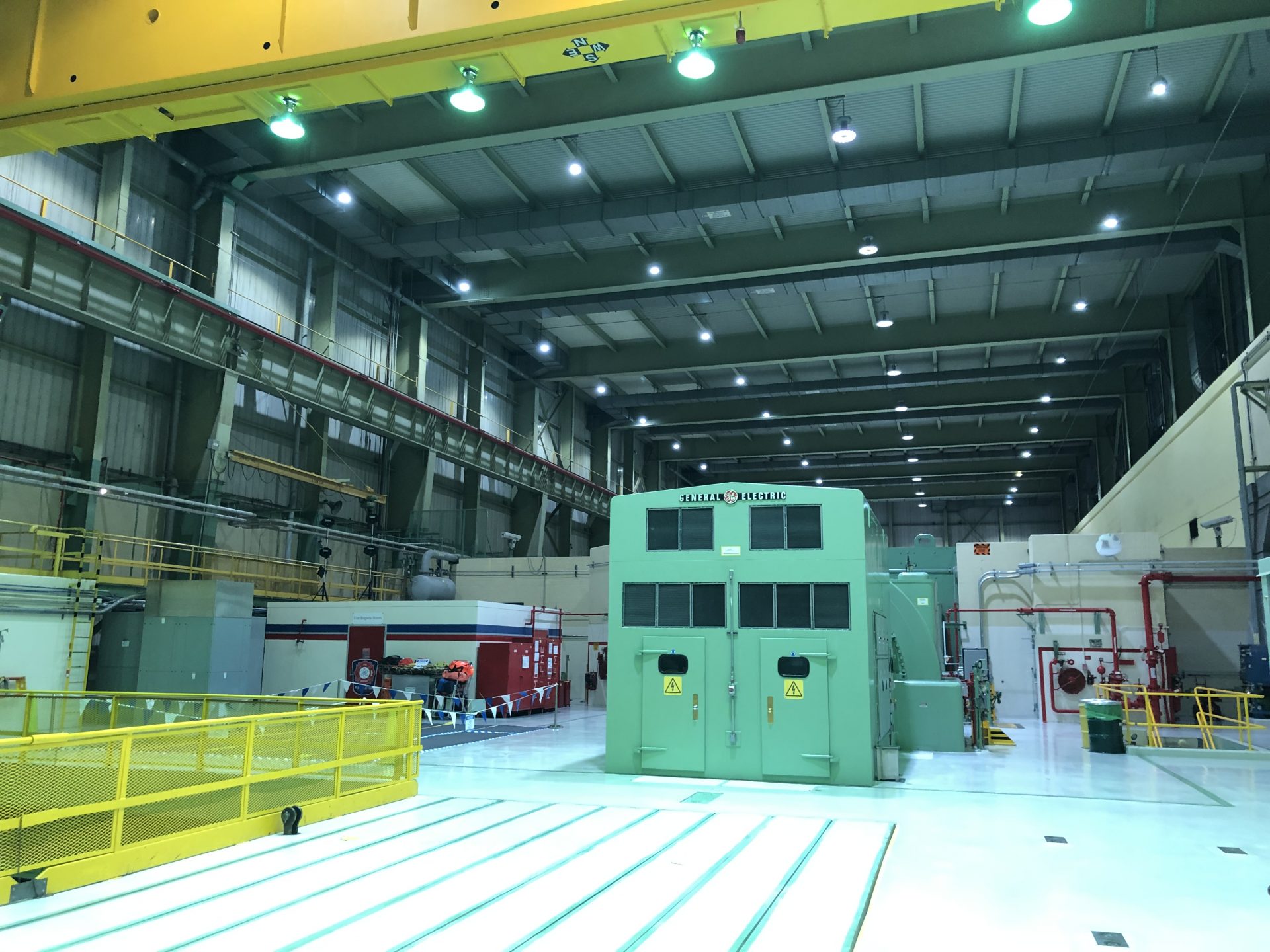 The inside of the Peach Bottom Atomic Power Station is seen on Feb. 19, 2019.

On Tuesday, Navin referenced some of the larger challenges facing plants. He argued that jobs from natural gas wouldn’t make up for what would be lost if nuclear power plants close.

Those jobs and the impact they have on the community, he said, need to be part of the equation when people talk about nuclear power. 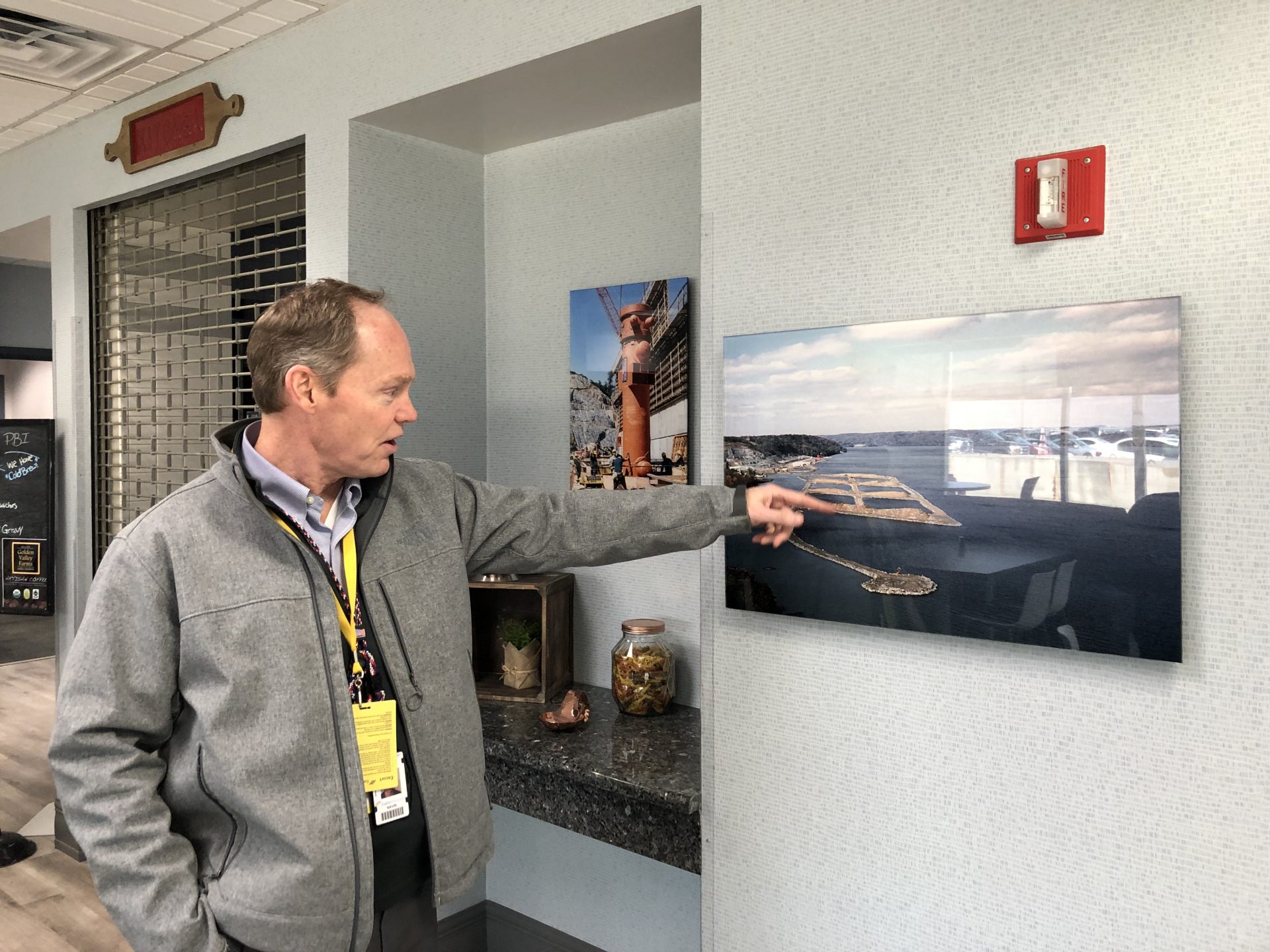 Patrick Navin, site vice president at Peach Bottom Atomic Power Station, shows an old photo of the site while inside a building on Feb. 19, 2019.