The agriculture industry is facing a workforce shortage and Gov. Tom Wolf’s administration hopes to address it with the Pennsylvania Farm Bill, a proposal that is being described as historic.

This multi-faceted $24 million package includes a variety of measures aimed at cultivating future generations of farmers and providing assistance to help new and beginning farmers.

“The average age of a Pennsylvania farmer is 56 years old,” Wolf said during a Thursday news conference on the 170-acre South Londonderry Township farm of Frank and Virginia Graybill.

Looking to a group of blue-jacketed FFA members, Wolf said, “And it’s getting higher every year which is why it’s so important for you to want to be farmers.”

Lawmakers hailed the Farm Bill proposal as the first time in generations that agriculture was given some focused attention in a governor’s budget proposal. The package includes low-interest loans, grants, tax breaks and other measures to attract a new crop of farmers in Pennsylvania.

Wolf said his administration doesn’t have all the answers to filling the nearly 75,000 job vacancies in the agriculture and food industries over the next 10 years. But he said engaging in a conversation with experts in the agricultural industry could produce some. 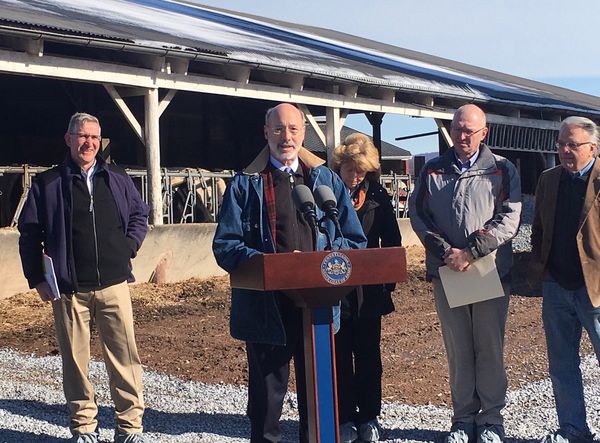 “If we want these kids to think about a career in farming, we need to make sure we are reaching out to them earlier and more effectively,” Wolf said. “it’s a step we have to take so more of our kids in those blue jackets as well as 4-H think about farming and agriculture as a viable lifelong professional pursuit.”

The farm bill provides $500,000 to reestablish a program to fund agricultural and rural youth organization to increase awareness of agricultural issues within the state as well as another $500,000 to improve childhood nutrition while increasing exposure to agriculture.

Rep. Martin Causer, R-McKean County, who chairs the House Agriculture and Rural Affairs Committee, said it could be something “as simple as helping our children understand where our food comes from could spark long-term interest in agriculture.”

Along with spurring interest in agricultural careers among young people, Agriculture Secretary Russell Redding said another initiative in the farm bill package is putting $2 million into an agricultural business development center.

The package includes a measure that would offer a tax break for beginning farmers. Qualified farmers could acquire preserved farmland without having to pay the realty transfer tax.

Noting the state has preserved more than 5,200 farms since it developed its farmland preservation program in 1988, more than any other state in the nation, Redding pointed out 20 percent of those farms have changed hands once already. While the preference is for farms to stay in the family, that’s not always possible.

By exempting them from the realty transfer tax, he said it would allow new and beginning farmers to purchase those preserved farms – and do so at a lower cost.

The proposed Farm Bill expands on a 10-year strategic plan prepared by the Department of Agriculture and Team PA that looks at the needs and opportunities in the state’s food and agricultural industry, which has a total economic impact to Pennsylvania of $135.7 billion.

“The investments we’re talking about here today in the Pennsylvania Farm Bill ensures out industry will grow and thrive,” said Sen. Judy Schwank, D-Berks County, who is the ranking Democrat on the Senate Agriculture and Rural Affairs Committee.

Another piece of the package includes providing $3 million in low-interest loans and grants to assist farmers in implementing best management practices. Yet another would invest $5 million into a rapid response disaster readiness account to be able to move quickly to address agricultural disasters and contain an outbreak or threat, such as the spotted lanternfly or avian influenza.

The Wolf Administration did not immediately respond to a question for information about where the $24 million money for the proposals in the farm bill are reflected in the governor’s proposed budget. That budget reflects only a $11.4 million increase in the agriculture budget for a total of $163.2 million.

Among other components in the farm bill is one that seeks to bolster Pennsylvania’s agricultural role in meeting the demand in the growing organic food market. This push for organic farming causes consternation among conventional farmers.

Some question whether it is sustainable for large-scale farming operations. Dairy farmer Frank Graybill, who hosted the news conference on his farm, said, “I’m not an organic-minded person and I’d like to think we produce healthy food. I’m not opposed to it but it almost puts us in the light that we’re not producing healthy food.”

But Wolf and Schwank said the idea behind this initiative is to not to shift over completely to organic farming. Rather they see it as another opportunity in the state’s agricultural industry for farmers to help meet a growing demand for organic products and sell them at a premium price.

“It looks like it should be beneficial and hopefully it will be,” he said. “The last four years for our farmers with low commodity prices and the dairy industry in disarray, anything that can help boost the potential for higher sales or more opportunities we certainly support.”