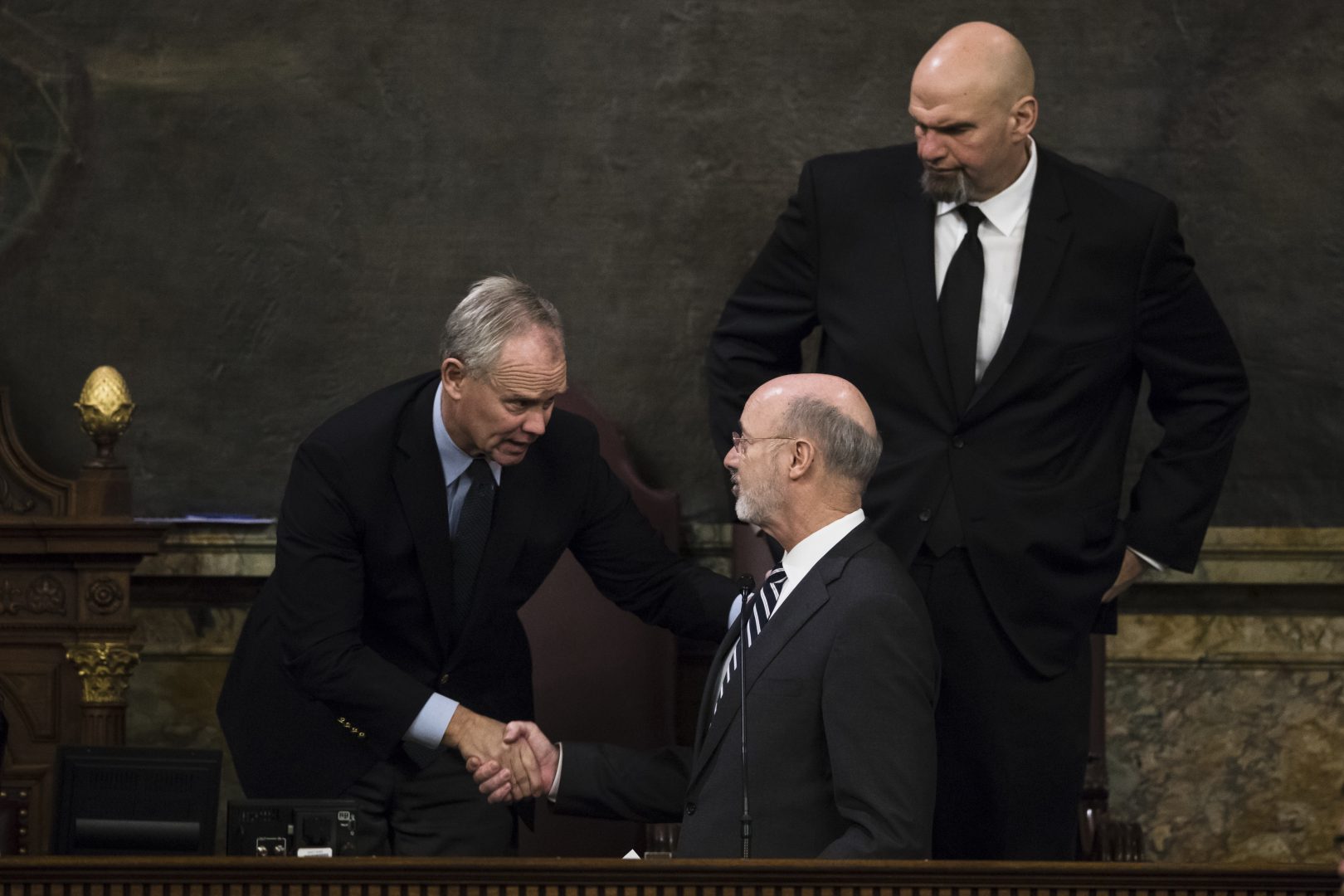 (Harrisburg) — Governor Tom Wolf is kicking off his fifth trip through the state budget wringer.

The Democrat’s new $34.1 billion proposal avoids the sweeping tax hike attempts that caused so much animosity with Republican lawmakers in his earlier years. But, there are still some potential pitfalls.

Wolf wants to hike overall spending by about $1 billion — routing the money toward things like a moderate education boost, childcare funding, investments in new state police equipment, and chipping in a little money for counties to buy new, state mandated voting machines.

But as the governor noted, a major feature of his plan should appease Republicans.

“Let me cut to the chase,” he told assembled House and Senate lawmakers during his address. “This proposal asks for no new taxes.”

Instead, a lot of the additional cash Wolf wants to spend would come from savings initiatives in human services and debt management.

But other money-making proposals are more contentious.

Take the governor’s call for increasing the minimum wage gradually to $15 an hour. He’s banking on $120 million from the change in the first year.

Many GOP lawmakers oppose such a move. While House Majority Leader Bryan Cutler didn’t completely shoot down the idea, he said it probably shouldn’t be part of the budget.

“My question has always been, where is the market at already?” Cutler said. “Clearly the market has moved beyond that in the majority of our jobs. I think it’s more important to focus on the areas where we all agree…workforce development that actually provides for wages far higher than minimum wage.”

Wolf also wants to charge fees for state police coverage in municipalities that don’t have their own police forces — a proposal that has gained some traction in the past but never full-throated support.

This one is a sliding scale. It would start at $8 per capita for municipalities with two thousand or fewer residents, scaling up an additional $8 for every thousand residents.

Stan Saylor, the GOP chair of the House Appropriations Committee, met the idea with caution.

“Just about every municipality in Pennsylvania would have to pay it, and in some cases, it would be too much of a burden on them,” he said.

Saylor said he would prefer to phase in a fee over time. Other Republicans said Wolf’s assessment isn’t enough to dissuade communities from relying on the state police for law enforcement.

As it stands, the money raised would generate less than a quarter of the estimated cost for troopers to provide coverage in communities without their own law enforcement.

Still, the governor’s primary focus was where the money is going. As Cutler noted, Wolf said he is most concerned with workforce investment.

“When Amazon made its decision not to locate its second headquarters in Pennsylvania, it cited workforce concerns as a main reason,” he noted.

One of the new initiatives to address the issue?

A so-called Keystone Economic Development and Workforce Command Center. Along with secretaries from the departments of Labor & Industry, State, and Community and Economic Development, its chairs will include Chamber of Business and Industry President Gene Barr, and AFL-CIO President Rick Bloomingdale. Senate Majority Leader Jake Corman, R-Centre, at the podium, speaks after Democratic Gov. Tom Wolf delivered his budget address for the 2019-20 fiscal year to a joint session of the Pennsylvania House and Senate in Harrisburg, Pa., Tuesday, Feb. 5, 2019.

Republicans’ initial reactions to the budget address were fairly positive.

“Normal tradition as the opposition party,” he said, “is to come out and sort of complain about the governor’s proposal. I think there is a lot there that we can embrace and get behind, at least generically.”

Pat Browne, a Republican who chairs the Senate’s Appropriations Committee, said he still thinks Wolf is trying to spend too much money.

The “governor’s rate of growth over the enacted budget last year is 4.3 percent,” Browne said. “That is not a sustainable number given our revenue capacity.”

House Republicans are indicating they agree with Browne’s assessment.

State revenues have been generally strong this past year.

But the budget does include what’s known as a supplemental appropriation—a half billion dollars to cover a funding gap that opened up last year. The legislature would have to approve that new spending.