Proposal to arm teachers in Tamaqua to get postponement vote 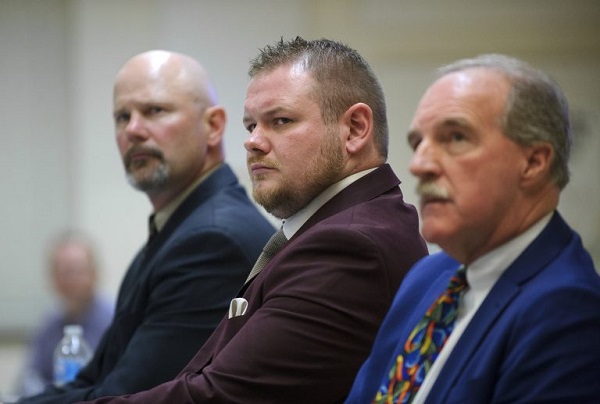 School board member Nicholas Boyle, 29, believes arming an autonomous, rotating slate of teachers is a cost effective way to save lives in case of a school shooting. (Matt Smith for Keystone Crossroads)

(Tamaqua) — Following lawsuits from both parents and teachers, the Tamaqua School Board will vote Tuesday night on whether to temporarily suspend a policy that allows some school staff to carry firearms in classrooms anonymously.

The board approved the policy in September, making it the first school district in Pennsylvania to sanction armed teachers. The teachers union quickly sued. In early January, a group of parents and grandparents announced a second lawsuit.

Last week, the school board’s security committee voted 2-1 to suspend the policy, “pending a resolution as to its validity by the Court of Common Pleas of Schuylkill County.” The full board will now vote on that motion.

Nicholas Boyle, who chairs the security committee, was the sole “no” vote against suspending implementation.

“My issue with delaying the policy is that we’re allowing the anti-gun, anti-Second Amendment lobbyist group to dictate school policy,” he said at the January 8 meeting, likely referring to the Philadelphia-based nonprofit CeaseFirePA, which has rallied against the idea.

“If something happened because we delayed the policy, it’s going to be us here in this room cleaning up the mess while they go back to Philadelphia — and I have a big issue with that,” Boyle said. “And that’s going to drag this out for a year, a year and a half, whatever it’s going to be.”

Larry Wittig, the school board president, told the Morning Call that suspending the policy does not mean abandoning it. Rather, he said, the district is still “100 percent committed to Policy 705,” but does not want to commit resources to train staff now given the possibility of a lengthy legal process.

Tamaqua has garnered statewide attention since announcing the policy, and it has remained a contentious topic among residents in the region.

The Pennsylvania State Senate passed a bill in 2017 that would have allowed armed teachers, but it never made it to the House, so the legal challenges against Tamaqua could have a statewide impact on other school districts that may be considering similar policies.

Pittsburgh suburb to decide whether to allow fracking beneath park