FILE PHOTO: A sculpture made from nearly 1,000 pounds of butter that pays tribute to dairy farm families is displayed at the Pennsylvania Farm Show in Harrisburg, on Jan. 7, 2009. The sculpture depicts a dairy cow at the breakfast table with a dairy farmer and his family. The sculpture, by sculptor Jim Victor, of Conshohocken, Pa., was crafted from butter donated by Land O' Lakes in Carlisle, Pa. The Pennsylvania Farm Show runs Jan. 9-16.

From the archives: How a thousand pounds of butter becomes three days’ worth of energy

Editor’s note: This story was originally published in 2012 and has been edited.

After the Pennsylvania Farm Show ends, its famed butter sculpture has a dizzying fall from grace.

The thousand-pound work of art is the star attraction of the annual indoor agriculture festival. Thousands of visitors snap pictures of the refrigerated sculpture, which depicts a scene carefully crafted by sculptors.

And once the show comes to a close, a farmer unceremoniously dumps all that butter into a manure pit.

That’s because the sculpture is turned into methane gas. One thousand pounds of butter, it turns out, creates enough energy to power a farm for three days. 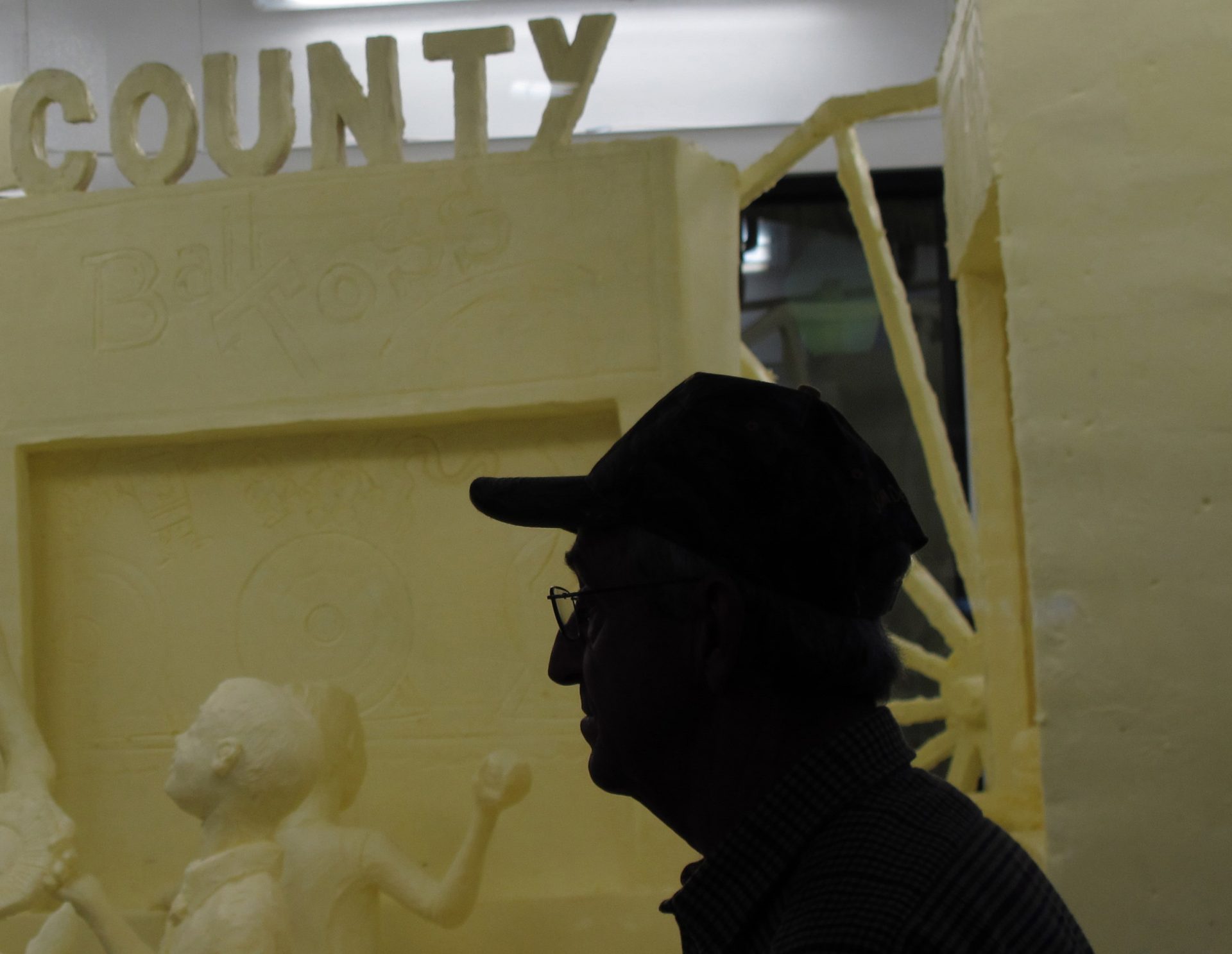 A Farm Show visitor checks out the butter sculpture

How does this work?

Mary Hoffman and Linda Mustacchia – both from Allentown – couldn’t figure it out as they peered at the sculpture through its eight-sided display case. “I don’t know, but I’m glad they’re doing that,” said Hoffman, who was worried the sculpture would have otherwise been thrown out. “I like butter,” she said. “But that’s a lot of butter.”

Turns out, butter becomes gas through the work of a methane digester. Glenn Cauffman, the manager of Penn State University’s Farm Operations, said the butter is dumped into a big heated tank where microorganisms feast on it. “Those microorganisms can break those fat molecules apart into the less complex molecules,” he explained. “Then further take that to produce a gas called methane, which burns readily in an engine, and can be converted into…electricity.” 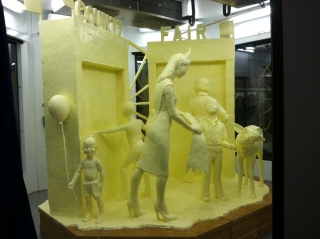 Dairy farmer Steve Reinford took custody of the sculpture in 2012.

He said the butter has to first be dumped into a manure pit, where it sits for several days, and then ground into fuel and fed into the digester. Reinford said it takes about five days to load the butter/manure mix into the tank.

“And as it’s heating it’s breaking down. It’s going to take probably up to 25, 30 days to break it down completely. And that will make the methane,” he said.

Reinford has been generating energy this way for a while. He said he gets a lot of fuel from the nearby Walmart, which hands over food product that has gone bad. The methane digester creates so much energy, Reinford said, that he sells it back to the grid.

Reinford made sure to see the sculpture on display at the Farm Show before it came to his farm. “I took a lot of pictures of it down there so I’d be able to see it before and after.”