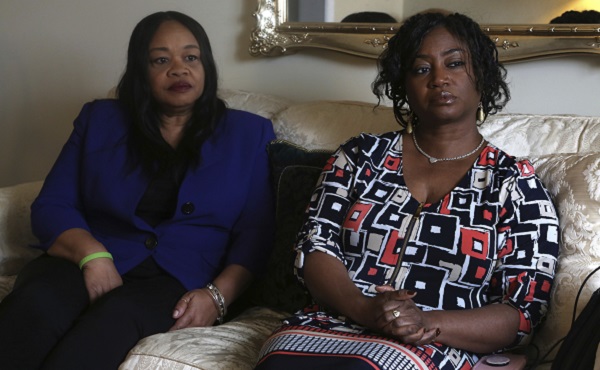 Sandra Thompson, right, speaks alongside Sandra Harrison, both golfers and members of a group of local women known as Sisters in the Fairway, during an interview with The Associated Press, Tuesday April 24, 2018 in York, Pa. Officials at the Grandview Golf Club in York called police on the group Saturday, accusing them of playing too slowly and holding up others behind them. On Sunday club co-owner JJ Chronister told the York Daily Record she called the women personally to “sincerely apologize.” (AP Photo/Jacqueline Larma)

(Harrisburg) — A York County golf course made national headlines this year after a white man called police on a group of black women golfers.

The incident was one of several across the country where police were called on African Americans for seemingly ordinary things.

In April, five African American women were on the Grandview golf course in Dover Township, York County, when they were approached by former county Commissioner Steve Chronister. The father of one of the owners, he told them they were not keeping up with the pace of play.

They continued down the fairway, but were confronted again by co-owner Jordan Chronister, who told them to leave — adding the police had been called.

In tape of the 911 call, after the operator asks if there are any weapons, Steve Chronister said, “Other than her mouth, there’s not any weapons.”

One of the golfers, Sandra Thompson, is an attorney and the president of the York NAACP.

“The only reason why you knowingly treat me this way is because I’m black,” Thompson told Keystone Crossroads. “There is no way he would treat a white attorney the same way.”

Officers arrived but determined the incident was not a police matter.

The ordeal was captured on video and caused a national stir, with several public calls for an investigation–including one from Democratic Governor Tom Wolf.

Jeremy Bannett with the Anti-Defamation League said it was troubling the club apologized a day after the incident, then appeared to backtrack in a follow-up statement.

“And the owner who was directly involved in the incident never apologized, and the club hasn’t yet explained how it’s going to prevent incidents like this from happening in the future,” Bannett said.

He added the incident is yet another example of how implicit bias impacts people of color every day.

“The fact that the police came and made no arrests supports that conclusion–they did nothing wrong,” Bannett said.

Pennsylvania’s Human Relations Commission scheduled hearings and collected testimony from the women, fellow golfers, and police about the event.

Video of an incident in a Philadelphia Starbucks garnered similar attention.

In that case, an employee called police on two black men who were waiting for a business meeting. Their arrest and susbsequent protests prompted the coffee chain to close thousands of stores  for a day of bias training.