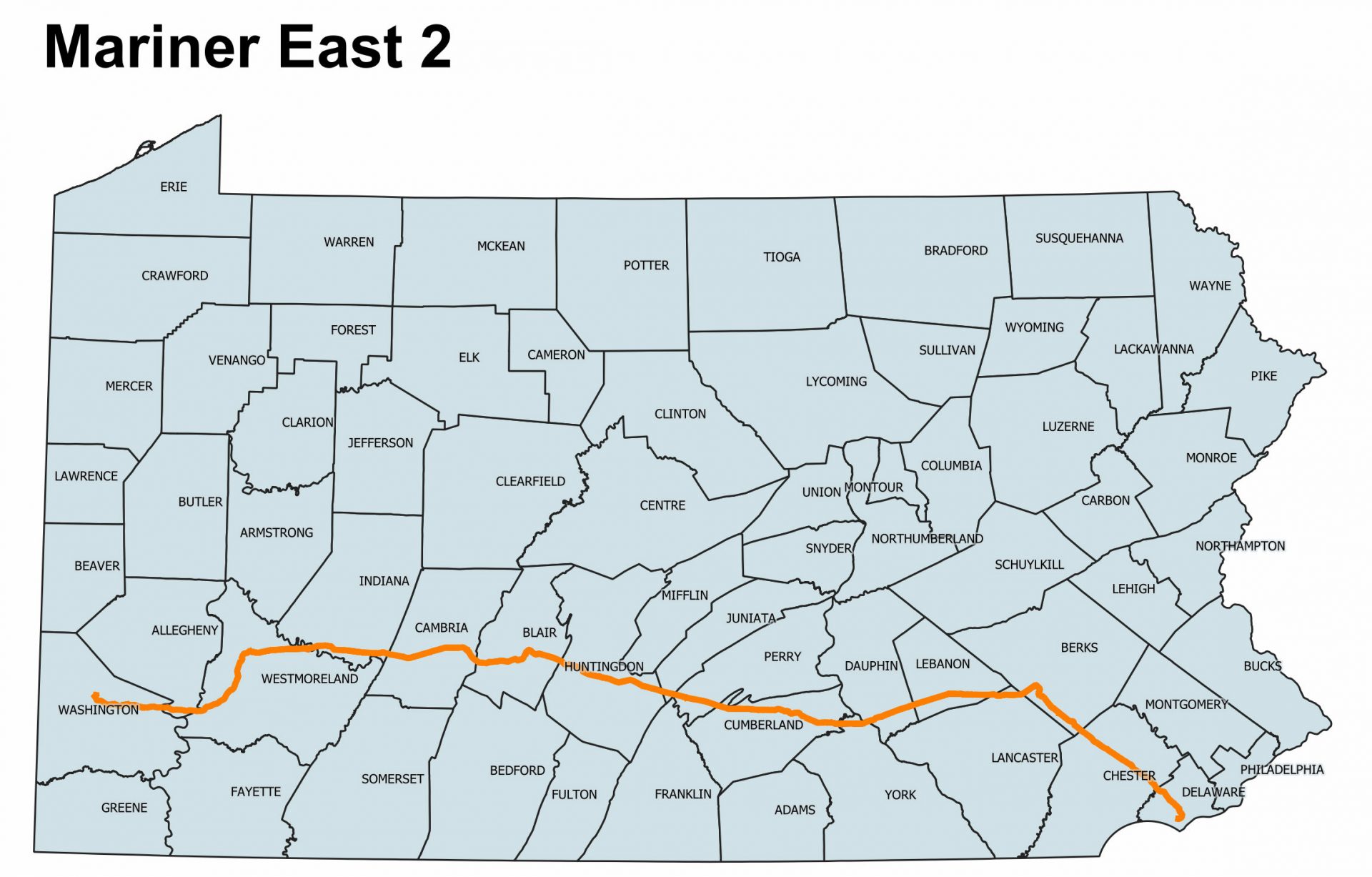 The map shows the Mariner East 2 pipeline’s path across 17 Pennsylvania counties on its way to the Marcus Hook industrial complex in Delaware County, where the natural gas liquids it carries will be shipped overseas to make plastics. The map was built using state Department of Environmental Protection shapefiles of the route for which DEP issued permits. The line extends west into Ohio. (Map: Scott Blanchard/StateImpact Pennsylvania)

Sunoco said in November that it would start operations of the frequently delayed Mariner East 2 pipeline by the end of 2018. The latest projected startup date follows a tumultuous year of technical, environmental and legal problems for the natural gas liquids pipeline project which – whenever it is completed – will carry propane, ethane and butane across Pennsylvania to a terminal at Marcus Hook near Philadelphia.

On Dec. 11, the company said it is still on track to start operations by year’s end.

Here are the highlights of an eventful year for the pipeline project:

Jan. 3, 2018 — DEP suspends all construction on ME2, citing permit violations:Officials directed Sunoco to explain how they would stop spills of drilling mud, which plagued the project since it began construction in February 2017. The DEP later fined Sunoco $12.6 million for what it said were ‘egregious’ violations of environmental laws. Construction was shut down for about a month.

March 9 — Sinkholes stir safety fears in Chester County: Sunoco worked to fill sinkholes that appeared at an ME2 construction site behind suburban homes at Lisa Drive, a development in West Whiteland Township. The PUC earlier halted the operations of ME1 there because of its concerns for public safety.

April 5 — Vandals damage ME2 equipment in Chester County, Sunoco says: The company offered a $10,000 reward for information about the incident which resulted in “significant damage” to a bulldozer and a backhoe. The attack took place at West Whiteland, close to where sinkholes appeared on a pipeline construction site in a suburban development. Pipeline opponents later offered their own reward for information about the incident.

May 24 — PUC judge shuts down ME2 construction, ME1 operation in Chester County township: Administrative law judge Elizabeth Barnes sided with State Sen. Andy Dinniman, a Chester County Democrat, who asked for an emergency injunction in West Whiteland on the grounds that public safety was at risk from unstable geology and the proximity of construction to the operational ME1.

June 5 — Chester County Commissioners slam Sunoco for ‘appalling’ lack of pipeline information: The panel accused the company of withholding safety information, putting profit over safety, and creating mistrust among residentswho feared for their safety if the pipeline leaks or explodes.

June 6 — Contractor struck ME2 in Delaware County: The contractor for a water utility scuffed the newly buried pipe in May at a depth of 6.2 feet, after Sunoco had told it the pipe was buried at 9 feet. Critics asked whether Sunoco had given inaccurate information about the location of its new pipeline elsewhere along the route. They said the incident, close to an elementary school, could have resulted in a “catastrophe” if the pipe had been operational.

June 14 — PUC allows ME1 operation to resume but upholds local ban on ME2 construction: The full Public Utility Commission partially overturned an administrative law judge’s order shutting down both ME1 operation and ME2 construction in West Whiteland Township, Chester County on the grounds of an “imminent risk” to public safety. In a 3-2 decision, the PUC said there was no evidence that ME1 posed a clear and present danger, but that it needed more information about ME2 before deciding whether construction could restart there. Work on ME2 was allowed to resume in August.

July 3 — Sunoco says it will use older pipeline as part of ME2: The company confirmed it will repurpose a 12-inch gasoline pipeline first installed in the 1930s as part of Mariner East 2 while unfinished sections of the new line are completed. A spokeswoman said use of the line would allow the company to meet its customer obligations. Critics said use of the old line raised more concerns about safety, and may reflect pressure on Sunoco from investors and customers after repeated delays to the line’s construction.

July 10 — Sunoco’s stand-in ME2 line leaked gasoline at Darby Creek, pipeline map shows: A map published by the federal pipeline regulator, PHMSA, showed that the 12-inch pipeline that leaked into a Delaware County Creek in June was the same line that Sunoco is using to get ME2 up and running. The regulator later confirmed the leak.

Aug. 3 — ME2 opponent jailed and fined for violating court order: Ellen Gerhart, a retired school teacher in Huntingdon County, was sentenced to two to six months in prison for ignoring a court order not to interfere with the pipeline construction on her land. She had become a icon of Pennsylvania’s anti-pipeline movement after losing an eminent domain battle with Sunoco.

Aug. 22 — Sunoco replaces some sections of ME2 because of flaws in coating:Township documents obtained by StateImpact Pennsylvania showed the company was lifting some parts of the line because it had discovered flaws in the coating. One pipeline expert said it was rare for an operator to replace sections of pipeline after they are buried.

Sept. 4 — PHMSA says Sunoco’s 12-inch pipeline leaked 33,000 gallons of gasoline into creek: The federal pipeline regulator confirmed that the ageing pipeline, which Sunoco will use temporarily to carry natural gas liquids as part of ME2, was the source of a spill into Darby Creek near Philadelphia International Airport. The pipeline, from Point Breeze near Philadelphia to Sinking Spring near Reading, previously leaked in 2015 and 1987.

Oct. 23 — Sunoco spokeswoman says Mariner East 2 delayed until 2020: Lisa Dillinger, in an email to StateImpact Pennsylvania, said both the 20-inch ME2 and the 16-inch ME2X pipelines would be completed by the fourth quarter of 2020 – more than two years later than the previous startup target. Another spokeswoman, Vicki Granado, later said that ME2 would be put in service “shortly” by joining up completed sections of the 20-inch, 16-inch and 12-inch lines. The company denied there was any confusion over the startup date. Mariner East 2 was planned as a 20-inch cross-state pipeline. But because the full length of the 20-inch line will not be finished until 2020, the company said, it will join three different pipelines to create a hybrid through which natural gas liquids will flow temporarily. The company says it is calling that hybrid line Mariner East 2.

Nov. 8 — Sunoco says it will start operating ME2 by year’s end: Executives told Wall Street analysts that construction and testing of the pipeline was “100 percent complete” and that it would be placed into service in the final quarter of 2018. The company previously said the often-delayed pipeline would be in service by the end of September but then blamed “regulatory issues” for missing that self-imposed deadline.

Nov. 15 — PUC tells schools that 12-inch ME2 pipe passed safety inspection: The head of the PUC’s pipeline safety team told the superintendents of three school districts along the Mariner East route that his inspectors had discovered no safety problems with an ageing 12-inch pipe that will be used as an initial part of the Mariner East 2 pipeline. The superintendents had written to the PUC saying they had plans to evacuate their schools if there was a leak but that they did not know about the 12-inch line, a repurposed gasoline line built in the 1930s, when they wrote the plans. Sunoco said it spent $30 million on upgrading the line in 2016.

Dec. 5 — Study says pipeline blast could be devastating, but risk is low: A report for Delaware County Council said a worst-case rupture of Mariner East 2 would kill anyone within about a mile and that a cloud of flammable vapor would spread 1.3 miles downwind under those conditions. But it also said there was more risk of dying from a heart attack than from a pipeline incident. Critics said the report understated the risks because it did not account for the fact that the pipeline will initially consist of three pipes of different diameters. Sunoco said the report overstated the risk because it was based on an assumption that an individual would be standing directly and permanently over the pipeline.

Dec. 11 — Judge denies emergency petition for Mariner East shutdown: Administrative Judge Elizabeth Barnes of the Public Utility Commission rejected a request by seven residents of Delaware and Chester counties to halt the operation of Mariner East 1 and block construction of the new Mariner East 2 pipeline until she holds a full hearing on the matter. The petitioners argued that the line is a major threat to public safety because Sunoco hasn’t given residents enough information about how to respond to any leak or explosion of natural gas liquids from the line. The judge, who earlier this year granted an emergency injunction for one section of the line, said the petitioners failed to meet all four standards for an emergency injunction.

Mariner East 2 at a glance

Avoiding the Spread of False News