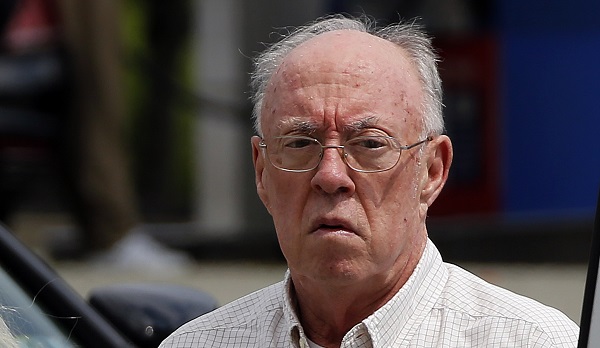 A Roman Catholic priest on Friday became the first person sentenced to prison as a result of a Pennsylvania grand jury investigation that found hundreds of clergy had abused children over seven decades.

The Rev. John Thomas Sweeney, 76, received 11 ½ months to five years in state prison and will have to register as a sex offender for 10 years.

He pleaded guilty in July to misdemeanor indecent assault on a minor after being accused of forcing a 10-year-old boy to perform oral sex on him while counseling the fourth-grader about misbehaving on a school bus.

“I want the public to know that he’s profoundly remorseful for any pain, anguish and discomfort that the victim has suffered as a result of his actions,” said Sweeney’s lawyer, Fran Murrman, after the sentencing in Westmoreland County.

“During the last 25 years Father Sweeney has engaged in hundreds of acts of charity and goodwill, hoping to partially atone for the behavior. And he takes this matter seriously and accepts full responsibility,” Murrman said in a phone interview.

Sweeney was taken away in handcuffs after the sentencing hearing.

Pennsylvania Attorney General Josh Shapiro, whose office prosecuted Sweeney, described him as a predator priest who used his position to abuse a child. Shapiro noted the victim testified against Sweeney.

“Justice was served in this case thanks to the bravery of this survivor to come forward and speak his truth,” Shapiro said.

The sweeping grand jury report, released in August, found that more than 1,000 children had been abused, although the great majority of cases that had not previously resulted in criminal prosecutions were too old to pursue. The report also blamed church officials for helping conceal the abuse.

Church officials have expressed contrition over the report’s findings and have noted that they now follow better procedures for handling these cases and that many of the grand jury’s findings date back many years.

A legislative effort to allow lawsuits over child sexual abuse to move forward that would otherwise fall outside the state’s legal time limits for such lawsuits stalled this fall because of opposition by leaders of the state Senate’s Republican caucus.

Sweeney was arrested in July 2017 for the assault that took place during the 1991-92 school year at St. Margaret Mary Elementary School in Lower Burrell, about 25 miles (40 kilometers) northeast of Pittsburgh. That charge stemmed from the grand jury investigation.

The boy, now in his 30s, told the grand jury last year that Sweeney lectured him about his behavior before placing his hands on the back of the boy’s head and assaulting him. The victim told investigators that after the attack Sweeney’s secretary gave him milk and cookies.

Sweeney became a priest in 1970 and served in western Pennsylvania parishes in Latrobe, Greensburg, Smock, Freeport, Apollo, Lower Burrell and West Newton. He was removed as pastor at Holy Family in West Newton last year after church officials learned of the investigation.

Murrman said the Greensburg diocese is in the process of defrocking Sweeney.