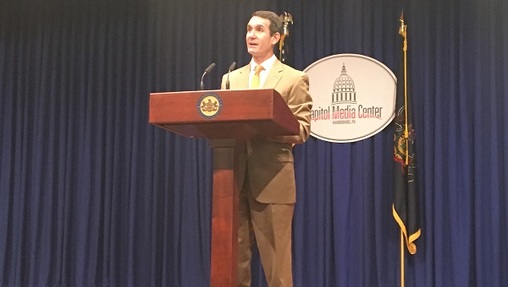 Auditor General Eugene DePasquale says this latest audit is a followup to previous DCED reviews in 2007 and 2014. (Katie Meyer/WITF)

The review is a follow-up to a 2014 study that found the department wasn’t always keeping tabs on the companies it gave money to.

Among other things, Pennsylvania’s Department of Community and Economic Development is responsible for job-creation programs that provide loans, grants, and lines of credit to boost certain in-state businesses.

But Auditor General Eugene DePasquale said the DCED didn’t effectively claw back that money if a company didn’t create the jobs it said it would.

“Pennsylvania taxpayers want to know if they’re getting an honest return on the money they invest when the state makes it a point of investing in job creation programs,” he said.

In 2014, his office recommended the department hire more people to track investments and make the whole process more transparent. And he said, officials listened.

“DCED now has five staff members, the highest ever they have had in that department, devoted to tracking whether companies are creating or retaining the jobs they promised,” he noted.

The commonwealth’s job creation effort has shrunk in recent years.

It currently consists of two programs that get $15 million to invest annually. There used to be five programs, and before the recession they were given $50 million a year.