More people voted for a Democrat for state House. But GOP kept majority 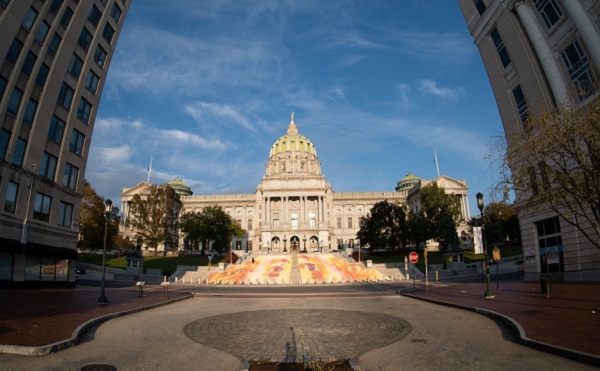 The state Capitol in Harrisburg. (Photo by Tom Downing/WITF)

A redistricting fight looms in the state

(Undated) — In November, 381,000 more Pennsylvania voters picked a Democrat than a Republican to represent them in the state House.

But Republicans will keep their majority.

You could blame geography — the idea being that Democrats are more likely to live in dense urban areas and so run up higher vote totals in uncompetitive races. You could point to the number of uncontested races in which Republicans didn’t field a candidate. You could dismiss this type of statewide comparison, reasoning that it’s the individual candidates, not a party, who voters chose to represent them in the General Assembly.

Or you could blame gerrymandering — the drawing of districts to favor one party. Carol Kuniholm, co-founder of Fair Districts PA, does.

She said Pennsylvania ranks high for the disparity in legislative votes received vs. legislative seats won.

The disparity helps show why it so difficult for Democrats to gain control of the Pennsylvania General Assembly, and that same disparity could influence lawmakers in a looming fight over congressional and state legislative redistricting.

There has been a lot of talk in Harrisburg about changing the redistricting process.

During a 2017 forum, Democratic Gov. Tom Wolf pointed to gerrymandering and unfair maps when asked why Democrats and “pro-choice” lawmakers don’t have more power in the General Assembly.

Meanwhile, redistricting fights have taken place all over the country this year. The Washington Post recently pointed to the discrepancy between votes won and seats held in Wisconsin as a sign of gerrymandering in that state.

PA Post added up the total votes and seats won in Pennsylvania’s state House, state Senate and congressional races this year, based on unofficial returns. The state House had the largest discrepancy in the 2018 election.

Here’s a look at all three.

In the November election, all 203 state House seats were up for grabs.

In the interactive map below, you can see how many votes the Republican and Democratic candidates received in each district.

But their share of state House seats is significantly lower than the percentage of votes they received. Democrats won 93 out of 203 seats, or about 45.8 percent of the seats up for grabs.

If their statewide vote share matched the percentage of seats won, they would have about 110 seats — a majority — in the upcoming session. Instead, Republicans won 110 seats.

Jason Gottesman, a spokesman for the state GOP, said there a lot of factors when it comes to votes received vs. seats won, and he said Republican state legislative candidates do a good job of creating their own brand and speaking to local issues.

“Trying to apply statewide numbers to legislative races has many down falls and does not lead to any legitimate conclusions,” he said in an email.

But Kuniholm, with Fair Districts PA, thinks the large number of uncontested races is one result of gerrymandering. She said some districts are going to be naturally uncompetitive.

“But there are lots of districts that were created very deliberately to pack Democrats into one district, or to carve communities up to give the Republicans an advantage,” Kuniholm said. 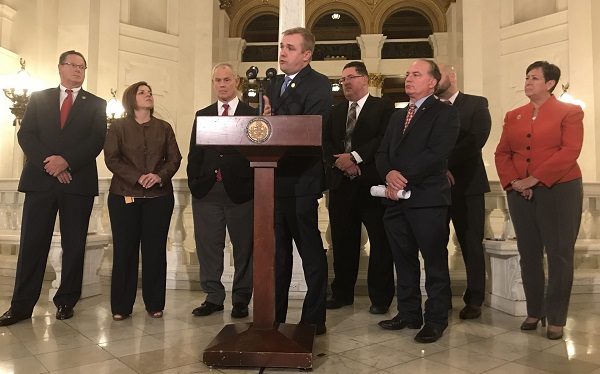 “The difference between votes cast and the number of seats won is significant and undeniable,” Bill Patton, a spokesman for the House Democratic Caucus, said in an email. “It’s outrageous that a Republican vote seems to count for more in Pennsylvania than a Democratic vote.”

In the Pennsylvania state Senate, half of the chamber’s 50 seats were up for grabs in the November 2016 election.

Democratic candidates received 46.4 percent of the two-party vote. But they won nine out of 25 seats, or 36 percent. If they had won two or three more seats, that would have been a closer match for their statewide vote percentage.

Half of the chamber’s 50 seats were again up for grabs this November.

Democratic candidates received 54.2 percent of the two-party vote. And they won 12 out of 25 seats, or 48 percent.

In the upcoming session, Republicans are poised to have 29 seats to the Democrats 21 seats, although a special election is expected for a southwestern Pennsylvania seat, and Republican leaders have raised doubts about the eligibility for one Allegheny County Democrat.

In the interactive map below, light blue represents seats that flipped from Republican to Democrat in the November election. Dark blue and dark red represent Democratic and Republican seats.

Two years ago, all 18 of Pennsylvania’s congressional districts were up for grabs.

Democrats won 45.9 percent of the statewide two-party vote. They won five out of 18 seats — less than 28 percent.

Earlier this year, the state Supreme Court tossed out the congressional map as a partisan gerrymander that favored Republicans. The court created its own map.

Democrats made big gains, winning 55.1 percent of the two-party vote. They won nine out of 18 seats.

If they had won 10 seats, that would have been a little higher than their total vote share.

In the interactive map below, you can see what the new representation for Congress in Pennsylvania will look like.

We included vote totals for candidates who were unopposed in their races.

In four state House races, there was a candidate who appeared as both the Democratic and Republican nominee. Those candidates won their party’s nomination in the primary and also received enough write-in votes to appear as the nominee for the other major party. In those cases, we based the analysis on the candidate’s party registration.

We did the same for state Senate candidates who appeared as both the Republican and Democratic nominee in 2016.

Why only count two-party vote share? Independents and non-major party candidates, including the Libertarians and Greens, didn’t pick up any seats and received a relatively small percentage of the vote. In the congressional races, for instance, two Libertarian candidates received 10,950 votes compared to the more than 2.7 million for Democratic candidates and more than 2.2 million for Republican candidates.

What’s next in PA

Wolf recently announced the creation of a commission to make recommendations for changing the redistricting process. Republican leaders in the state House and Senate accused of him grandstanding.

Meanwhile, some lawmakers are hoping to move forward on legislation that would create a citizens’ commission for redistricting.

The next redistricting process is set to take place in 2021. Democrats hold the governor’s office and now hold a 5-2 majority on the state Supreme Court, so they are expecting to be in a better position for redistricting than in past years.