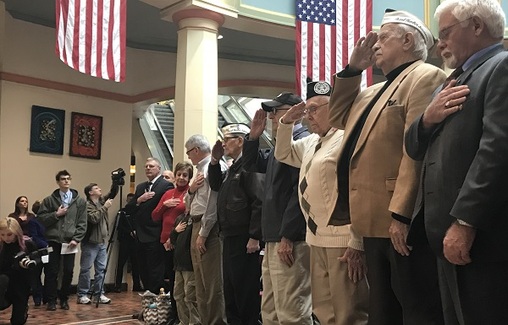 It’s a motion that would have been familiar to them 77 years ago when, as 19 and 20-year-olds, they witnessed the devastating Japanese attack on Pearl Harbor.

The four of them, now well into their nineties, are among the last Pennsylvanian survivors of the bombing.

“Especially when I was watching those bombs falling on the ships,” he said. “You never forget them.”

Schimmel was serving as a plotter and switchboard operator at an information center on the morning of December 7, 1941, and was among the first to learn that Japanese planes were approaching the base.

George had a similar, clear recollection.

He was in the Army Air Corps at the time, and had been about to head to the mess hall on the morning of the attack.

He spent the rest of the day in the control tower, watching bombs drop.

He said he thinks everyone would do well to keep Pearl Harbor in mind.

“I would say that we should be prepared to go through it again,” he said. “It may happen again in the future.”

Pennsylvania’s commemoration ceremony is just one of many held annually around the country.

This year, it included an extra tribute to another decorated World War II veteran–President George HW Bush, who died a week ago at 94.