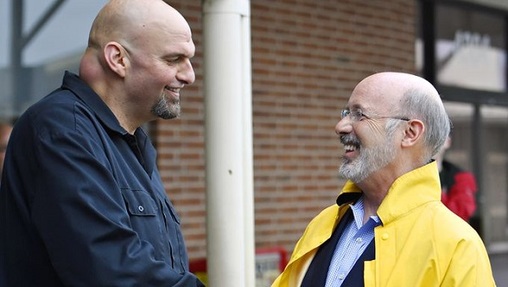 Wolf and Fetterman, soon after the primary election that made the Braddock mayor the Democratic candidate for lieutenant governor. (Dawn J. Sagert/York Daily Record)

(Harrisburg) — When a new legislative session starts in January, embattled lieutenant governor Mike Stack, who lost the Democratic primary, is exiting the Capitol.

That decision might save the commonwealth a little money. But what’s even more important to the new lieutenant governor is how it looks politically.

Ever since Braddock Mayor John Fetterman won the Lieutenant Governor nomination, he and Wolf and have presented themselves as a unit.

Fetterman, at six-foot-eight, towers over Wolf. Since his early days as the leader of a onetime steel town, the mayor has had a strong personal brand. He’s bald, goateed, tattooed, and perpetually wearing cargo shorts.

In one video spot from Wolf’s campaign, the two went tie shopping.

And so, when Fetterman had to decide where he’d live as Lieutenant Governor, he thought about what his constituents would think.

“I would say that it’s inappropriate, for lack of a better phrase, for a public servant to be living in a mansion that is staffed and furnished by the taxpayers,” he said. “And speaking to my own case, I just don’t believe that it’s a good look for me.”

When administration officials and staff talk about the houses the state provides for the governor and lieutenant, they typically use the more modest-sounding word “residence.”

The governor’s house in Harrisburg is 28,600 square feet; the bottom floor has customarily been used as a museum. The house for the lieutenant, in Fort Indiantown Gap, is three stories, about 2,400 square feet, and has a pool.

In 2014, Wolf broke tradition when he announced he didn’t want to live in the residence.

He stayed at his family’s York County estate. The Harrisburg mansion is now used mostly for events and tours. 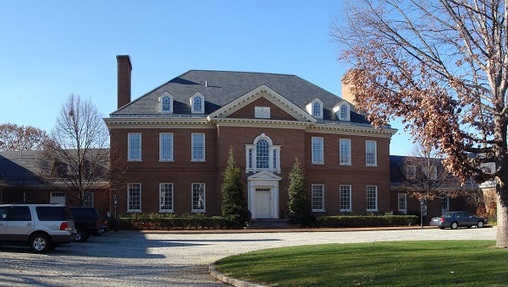 Fetterman said he envisions the Fort Indiantown Gap house being used in a similar way.

“I believe that the space should be utilized for the maximum benefit of Pennsylvania because it belongs to Pennsylvania,” he said.

Troy Thompson, the spokesman for the state’s Department of General Services, said it actually costs a little more to use the governor’s mansion for public events than it did to maintain a private residence.

“We’ve added more staff to cover up demand for those events, as well as the utility usage,” he said.

In 2014, the last year Governor Tom Corbett lived there, Thompson estimates the mansion cost around $1.2 million. It dipped slightly in 2016, but last year it was $1.3 million.

Last year, staff at the residence complained Stack and his wife treated them badly. Wolf ended up stripping Stack of most of the domestic staff and his police detail and launched an investigation into the lieutenant governor’s behavior.

The resulting report wasn’t released. But the episode damaged Stack’s relationship with the governor and gave the mansion some bad press.

Eric Epstein, who runs a watchdog website called Rock the Capital and recently ran an unsuccessful state House campaign as a Democrat, takes up a lot of issues in Harrisburg. But the lieutenant governor’s residence really annoys him.

“First of all, Pennsylvania is undistinguished by being the only state that has a residence for the lieutenant governor,” Epstein said. “I think at the end of the day we have to question why we have a lieutenant governor’s mansion, and I think it might be time that we close it down.” 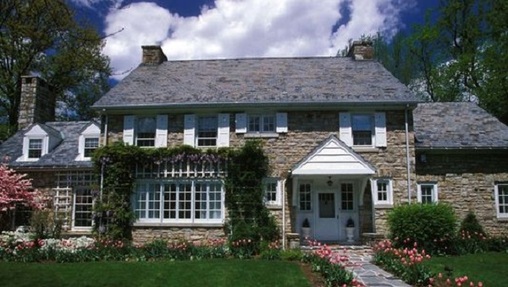 Lieutenant Governor Mike Stack has lived at his state-funded residence for four years. But he’s leaving in January, and the house will be unoccupied for the first time in years. (PA Department of General Services)

Most of the reassigned staff members were moved to the governor’s mansion.

Thompson said it’s not clear how much the Lieutenant Governor residence will cost when no one lives there. It hasn’t come up before.

“There would have to be upkeep on the property to make sure it didn’t go into decay, but it’s hard to tell without an occupant at this point,” he said.

Fetterman hasn’t worked out the details for how he’d like to use the residence yet. He likes the idea of opening the pool for kids to swim in the summer.

The house is on a military base, which might make public use a little difficult. Right now, the area is open, but a state spokesperson said in the next few years there are plans to tighten security.

Fetterman said no matter what happens, he’s not moving in.

He plans to rent an apartment part-time in Harrisburg or York, but he’s keeping his home base in Braddock, where he lives with his family above a onetime car dealership that’s now a restaurant.

That, he said, is a better look.