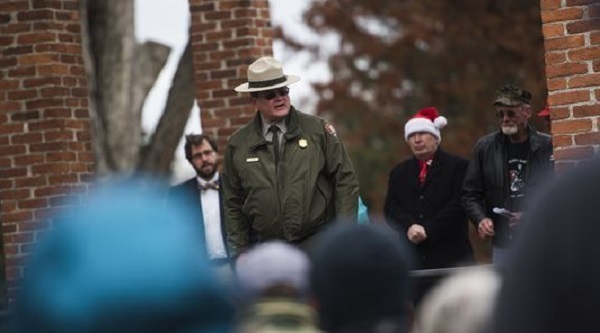 File: Gettysburg National Military Park superintendent Ed Clark speaks to a crowd before volunteers prepare to lay Christmas wreaths on graves at Soldiers’ National Cemetery in Gettysburg on Friday Dec. 2, 2016 as part of the Sgt. Mac Foundation and the National Wreath Project, which aims to place wreaths on veteran’s graves in Gettysburg and Quantico National Cemeteries. The program was started in remembrance of Sgt. Eric McColley. (Photo: Shane Dunlap, The Evening Sun)

(Harrisburg) — A former superintendent of Gettysburg National Military Park was accused in a report released Thursday of improperly accepting free trips from the foundation that runs the park’s visitor’s center.

The report said federal prosecutors disclosed two weeks ago that they did not intend to prosecute Clark. A spokeswoman for the U.S. attorney’s office in Harrisburg offered no immediate comment.

Clark’s lawyer, Barak Cohen, said his client did not violate the law and called the release of the report a “gross injustice,” and that the National Park Service has not resolved the matter.

“They are completely off base in claiming that the law was violated,” Cohen said. “They were unable to prove that and it’s just flat-out wrong.”

Cohen said Clark repeatedly sought ethics guidance from the park service but was unable to get it. He said Clark received no personal benefits.

“Every last thing he did was part of his duties as park superintendent,” Cohen said.

Jeremy Barnum, chief spokesman for the National Park Service, said it was reviewing the findings and “will take any and all appropriate action.”

The inspector general’s report said the investigation began with an anonymous complaint about Clark two years ago.

Kinsley president Bob Kinsley is listed as the foundation board’s chairman emeritus. A telephone message left for him at the company Thursday was not immediately returned.

According to the report, Clark told investigators that his “repeated disregard of regulations concerning the acceptance of travel-related expenses was an oversight and due to his own ‘sloppiness.'”

An unnamed supervisor told investigators that he would not have approved several of Clark’s trips.

“The supervisor acknowledged that Clark’s trips that involved flying in private airplanes, staying in expensive hotels and eating expensive meals appeared to be improper because neither the supervisor nor the Ethics Office had approved them,” the report said.

There was no evidence that Clark directly solicited funds, which is prohibited, but he did twice give statements of support to the foundation and the Civil War Trust that were sent to potential donors, the report said.

Investigators said five donors who met with Clark over two years all said he did not solicit funds from them during those meetings.

The lawyer, Barak Cohen, says Clark repeatedly sought ethics guidance from the park service but wasn’t able to get it.