Voters to choose between two first-time candidates in 13th district 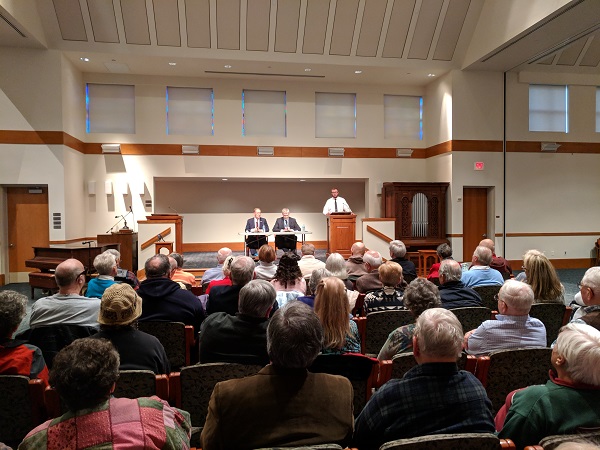 But it didn’t become less Republican.

The new boundaries stretch from Westmoreland County in southwestern PA to the midstate. It covers all of Adams and Franklin counties and part of Cumberland County.

The district is seeing its most competitive general election race in several years, due to the retirement of long-time Republican Congressman Bill Shuster–who won the seat after his father Bud Shuster left office.

Ottaway has told supporters that when he and his late wife moved to the district in 1990, they openly wondered what kind of war hero Bud Shuster must have been to get his name on so many roads in the area.

“It wasn’t long before we discovered that he was, of course, our permanent member of Congress, who often ran unopposed,” Ottaway said. “And we both found that objectionable.”

The two always talked about how, someday, one of them would challenge Bud Shuster…then later, his son Bill.

This is finally the year one of them stepped up, even though a Shuster is not running for reelection.

Ottaway is running as a moderate Democrat in one of the most Republican districts in the state. 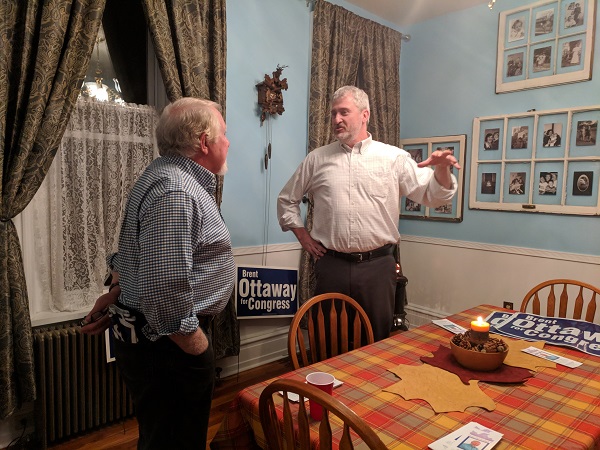 Democrat Brent Ottaway talks with a voter during a campaign stop in Newville, Cumberland County on October 1, 2018. (Photo: Rachel McDevitt/WITF)

At a campaign stop earlier this month at a supporter’s home in Newville, Cumberland County, he told voters he’s definitely an underdog. But, he said, there are more Democrats in the area than people think.

“People will say, yes we’re Democrats but we try not to say that out loud, you know, we don’t want trouble,” he told the group to laughter. “They don’t realize as I do, because I have a list, that there are five or six other Democratic households right on the street there.”

“There’s some parts of the region where, you might look at a given county where it’s roughly even in terms of partisan registration, but it’s voting 60-40 Republican,” he said. “That suggests to me that there are some persuadable voters there who might be convinced by a Democrat who’s perhaps not as aggressive on gun control, or not as aggressive on abortion rights issues or something like that, that might be more of those wedge issues.”

But he said it’s a hard road. Republican registration in the district is nearly double that of Democrats.

Plus, there’s the money.

Joyce, the Republican candidate, has much deeper pockets than Ottaway, and so has more resources to build name recognition.

Joyce, a dermatologist, was able to loan his campaign more than $900,000. Ottaway, a communications professor at St. Francis University, has given his campaign about $3,000, according to filings with the Federal Election Commission.

Joyce has been able to run TV ads promising to be a conservative voice who will work with President Trump. Ottaway said he was hoping to be able to afford one billboard.

Joyce also picked up support from outside groups and the endorsement of outgoing Congressman Shuster, which helped him secure a primary win in an eight-way race with 22 percent of the vote.

At a debate this month in New Oxford, Adams County, voters heard some similarities between the candidates and how they share some priorities. 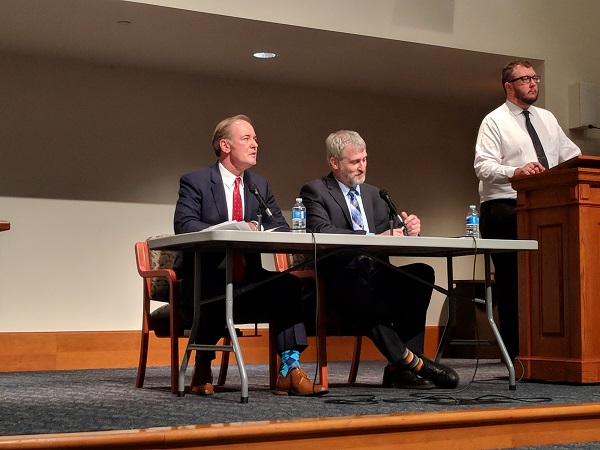 Both want to see Social Security and Medicare protected and for Americans to have access to affordable health care.

Some people in attendance seemed to appreciate–even be relieved by–those similarities. But many had come with their minds already made up.

Jeanne Neylon from Gettysburg was wearing a Brent Ottaway t-shirt.

“It didn’t change my mind,” she said about the debate. “I know where I stand.”

Bobbi Lidard, also of Gettysburg, said she thought both candidates did a good job, but, “I’ve kind of made up my mind. I can’t turn this country over to the Democrats.”

Lidard said she thinks the country’s heading in the right direction under President Donald Trump.

Throughout the debate, Joyce made his support for the president and his policies clear.

“I will support his agenda as I see it supporting every individual in south central Pennsylvania,” Joyce said in an interview after the debate.

Joyce promises to be a problem solver, and presents his solutions in concise, almost rehearsed answers.

With health care, Joyce wants to implement what he calls a “fair market plan.” He said it would allow insurance to be sold across state lines–an idea that hasn’t gotten much traction–and let people pick and choose exactly what their insurance covers.

He said, as for the five percent of people who make up 50 percent of health care costs because of chronic conditions, “That five percent would be separated out and covered by a different entity.”

Ottaway said he wants to work across the aisle to fix the country’s health care problems.

Ottaway stresses he wants to go to Washington to work on long-term answers to issues on a bipartisan basis–putting aside party for the good of the constituents.

“I am someone who is frustrated with Washington’s war on our future,” he told the audience at the debate, “with the short-term decision making that rules Congress as people think only as far as their next election.”

He said he wants Congress to act as a check on the other branches of government, and sees many of the Trump Administration’s policies as harmful to the country in the long run–including the tax cuts, tariffs, and the border wall proposal.

Whether Joyce or Ottaway is elected, Congress will be getting a brand-new lawmaker who could help shape the direction of the House.

And no matter who wins–it will be the first time in 46 years the district’s congressman is not named Shuster.

How you can help those affected by the Pittsburgh synagogue shooting