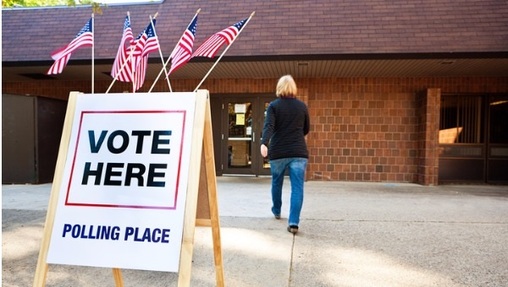 Researchers on the study concluded one of the biggest factors in voting ease was same-day registration. Pennsylvania requires voters register at least 30 days in advance. (Photo by AP)

(Harrisburg) — In a recent review of state voter registration laws, a group of political scientists ranked Pennsylvania 31st in terms of how easy it is to vote.

That number–middling but skewed toward greater difficulty–comes as little surprise to election analysts familiar with the commonwealth.

The study, published in the Election Law Journal, looked at 33 different types of election laws in all 50 states to create an index of factors that may make it harder, or easier, to vote.

Those include voter ID requirements, early and absentee voting, limited polling hours, and allowing minors to pre-register before they turn 18.

Pennsylvania, on the other hand, cuts off voter registration 30 days before an election–the maximum allowed under federal law.

Michelle Kanter Cohen, a counsel with the nonpartisan Fair Elections Center who focuses on Pennsylvania, said she thinks that’s a key reason the commonwealth ranks low on voter accessibility.

“Moving the voter registration deadline closer to Election Day allows more voters to participate, and that’s really at a time when people get more and more informed and excited to vote,” she said.

It’s hard to measure how registration laws impact votes with total certainty. But even when controlling for factors like income and election competitiveness, researchers found turnout declined more than 3 percent on average for every added unit of voting difficulty in the index.

Relative voting ease aside, Pennsylvania’s registration rates appear to have risen ahead of this year’s election.

An analysis from the Morning Call found that before the October 6th cutoff, 8,594,046 people had registered to vote in the commonwealth–up 342,996 from the 2014 midterm election.