‘We have to see his humanity’: Pa. Human Relations Commission reacts to speaker from KKK 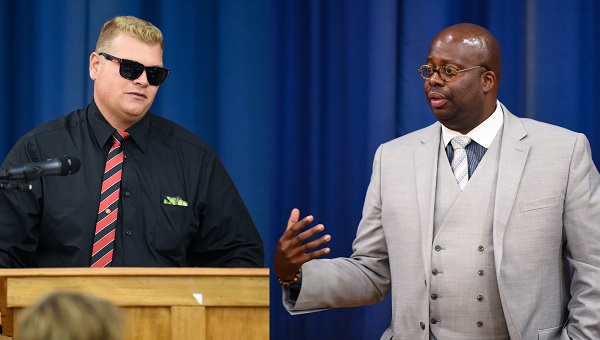 When a man claiming to represent the Ku Klux Klan stepped to the podium Wednesday night at Crispus Attucks Community Center, the easy option would have been for the audience to react with disdain.

This was, after all, the first of three social justice town halls designed to address hate and racism in York County.

Instead, a community that’s been the epicenter of a wide variety of racial injustice listened — uncomfortably, albeit respectfully — with minimal interruption during his five minutes at the microphone.

Ultimately, the executive director of the Pennsylvania Human Relations Commission, Chad Dion Lassiter, took the mic when the gentleman who called himself Jim and claimed to be a grand dragon out of Hershey was finished.

The man, who had identified himself as Jim Shelton or Sheldon, was dressed in black shirt, red striped tie and dark black sunglasses and seemed to consider the invitation but ultimately declined.

He had delivered a partly prepared speech touching on the usual points associated with the Klan, including the belief that Aryan men are the “most discriminated against demographic in this nation.”

When he wasn’t reading from prepared material, he appeared nervous and struggled with his speech. At one point Walthour corrected his attempt at saying the word “systemic.”

One man from the crowd, John Eyster, briefly interrupted him, but Lassiter came to the supposed grand dragon’s defense, allowing him to finish his time at the podium. Eyster, humbled by the moment, later apologized to the crowd of roughly 50-60 for speaking out of turn.

Lassiter then addressed the issue in detail after the man and an associate departed, safely escorted out of the center by York City police officers.

He suggested the man hadn’t been aware of work by Ira Katznelson (“When Affirmative Action Was White”) and David Wellman (“Portraits of White Racism”).

He told a story about late historian John Hope Franklin, a Harvard-educated African-American man who, ahead of receiving the Presidential Medal of Freedom from President Bill Clinton in 1995, was handed coats by invited guests who mistook him for help, only to see those same people dumbfounded when Clinton later put that medal around his neck (because Franklin courteously put some of those coats away).

“So that person who was here, we have to see his humanity, as fragile as it is,” Lassiter said. “Because we need to have a meeting with him. We need to bring him to the beloved community.

“There’s such a thing as restorative justice where we can bring him back to himself and back to the community. There’s something that went astray.”

The panelists discussed private and public examples of regional and national racism, including the Grandview Golf Club incident, which involved Thompson, and the murder of Chad Merrill outside the Red Rose Restaurant & Lounge after he consoled African-American friend Jerrell Grandison-Douglas from racist torment.

There are two other town halls scheduled for York County in West Manchester and Hellam townships, though dates have not yet been determined.

“That brother right there, I’m encouraged,” Lassiter continued after the man from the KKK spoke. “Because one of my mentors, Cornel West, said, ‘How did we become so well-adjusted to injustice?’ There’s room for him at the beloved community table. And if he doesn’t want to come, that’s OK.

“It’s more like him that might be in this room; they just didn’t have the moral tenacity to come up and speak about it!”