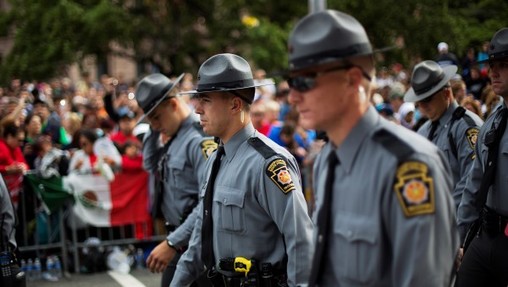 State police will now be required to make more visits to schools. (Photo by AP)

(Harrisburg) — State troopers are about to be spending more time in some Pennsylvania schools.

New rules will require more frequent visits to schools in areas that don’t have their own police departments, and so they rely on state police for coverage.

Troopers will now send someone to do a check once per shift–or three times a day.

Tarkowski said the checks will vary, from exterior scans, to officers talking to students and teachers.

“That’s not to say that state police won’t swing by schools in areas that have their own police,” he added. “But the once per shift mandates are for schools in areas where Pennsylvania State Police provide the primary coverage.”

Pennsylvania has nearly 1,300 municipalities without their own police forces.

They tend to be home to smaller, rural schools–and Tarkowski said often, such districts don’t have resource officers either.

“School resource officers are very expensive, and not something that a lot of districts can afford. So one of the ways that the Pennsylvania State Police can support school safety is to do something like this,” he said.

No additional money for the state police is attached to the rule change.