Flight 93 Tower of Voices an ‘everlasting concert by our heroes’ 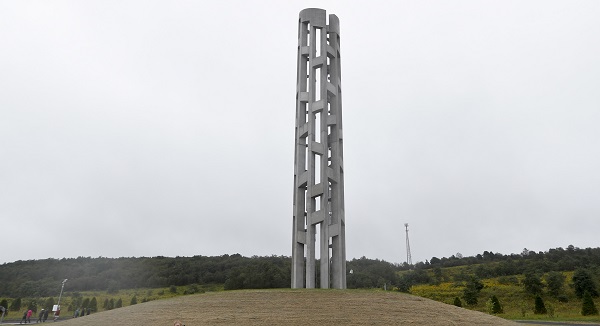 The dedication of the 93-foot tall Tower of Voices on Sunday, Sept. 9, 2018 at the Flight 93 National Memorial in Shanksville, Pa. The tower contains 40 wind chimes representing the 40 people that perished in the crash of Flight 93 in the terrorist attacks of Sept. 11, 2001.(AP Photo/Keith Srakocic, Pool)

(Shanksville) — The heroism of airline passengers and crew who died when hijackers crashed their plane into a Somerset County field was remembered Sunday with the dedication of a concrete-and-steel tower that will ring with wind chimes for every one of them near the spot where they fell to earth.

Relatives of the 40 people killed during the terrorist attacks of Sept. 11, 2001, helped ring eight of what will eventually be 40 aluminum chimes at the Flight 93 National Memorial site, and former Gov. Tom Ridge said the Tower of Voices will be “an everlasting concert by our heroes.”

The dedication occurred nearly 17 years after passengers on the hijacked flight from New Jersey to California fought back against a band of terrorists who then crashed the jetliner into a rural field. Officials concluded the terrorists were aiming the Boeing 757 toward Washington, to be used as an enormous airborne weapon.

It was “the day that lives were lost so that other lives were saved. And heroes were made over the skies of Shanksville,” said Ridge, who served as the first secretary of the Homeland Security Department when it was created after 9/11.

The roughly 93-foot (28-meter) structure represents the final phase of the Flight 93 National Memorial. Each chime generates a distinctive sound, and rows of trees that ring the site symbolize sound waves.

“Together their voices will ring out into perpetuity, with this beautiful Somerset County, Pennsylvania, wind,” park Superintendent Stephen Clark said.

The national park at a the crash site, about 2 miles (3 kilometers) north of Shanksville, also includes a memorial plaza, dedicated on the 10th anniversary in 2011, and a visitor’s center that opened three years ago.

As a cold, driving rain pelted the hills, memorial architect Paul Murdoch spoke of the plan, which uses the wind to activate the chimes. The remaining chimes are expected to be installed in the coming weeks.

“These chimes respond to unanswered cries of voices not spoken again, but remembered in the vibrations of a monumental tower,” Murdoch said. 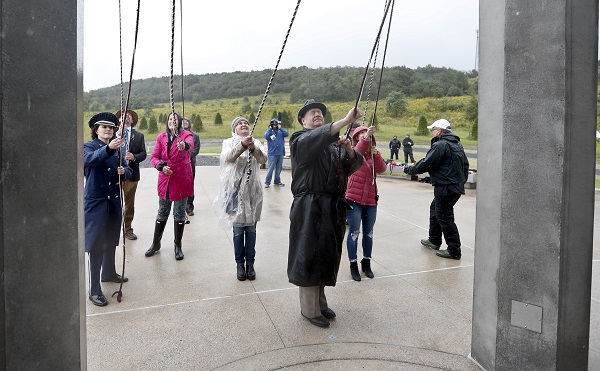 Members of passenger families, friends and volunteer repesentatives pull the ropes to ring the chimes at the dedication of the 93-foot tall Tower of Voices on Sunday, Sept. 9, 2018 at the Flight 93 National Memorial in Shanksville, Pa. The tower contains 40 wind chimes representing the 40 people that perished in the crash of Flight 93 in the terrorist attacks of Sept. 11, 2001.(AP Photo/Keith Srakocic, Pool)

Nearly 3,000 people died in the Sept. 11 attacks, when terrorists seized control of four planes. They flew two of them into the World Trade Center skyscrapers in New York and the fourth into the Pentagon in Arlington, Virginia, just across the Potomac River from Washington, D.C.

“These guys are the real heroes,” said retired truck driver Stefan Robbins, visiting the memorial from Lexington, Kentucky. “They didn’t sign up — they’re not a cop, they’re not a firefighter.”

The Flight 93 passengers learned in mid-flight they had been hijacked and responded heroically, declaring “let’s roll” as they confronted their adversaries inside the plane.

Thirteen passengers on the plane made a combined 37 phone calls during the attack, getting information about the other three hijackings and crashes.

“When they learned that, it galvanized them as a group,” Clark said. “They said, ‘We’re not going back to any airport. This is a suicide mission.'”

As some passengers apparently tried to storm the cabin, the hijacker at the controls then rolled the plane, trying to throw them off balance, before the aircraft became inverted and crashed at 563 mph (906 kph) on the edge of a reclaimed strip mine at 10:30 a.m.

The impact ignited about 100 hemlock trees. Hemlocks are used as symbols throughout the memorial’s design, including the tower.

A 17-ton (15-metric ton) sandstone marks the impact site, located within a 44-acre (17.8-hectare) fenced-off area of the field where crash debris landed, referred to as the “sacred ground.” Access to that part of the park is limited to family members of the passengers and crew. Four 40-foot (12.2-meter) containers of remaining debris from the crashed airplane were buried there during a private ceremony on June 21.

The memorial was funded with $46 million from 110,000 private donors, including $6 million to design and build the Tower of Voices. Volunteers are well on their way to the goal of planting 150,000 seedlings around the 2,200 acre (890 hectare) park. It attracted about 400,000 visitors last year.

The dedication comes two days before the anniversary of the Sept. 11 attacks. President Donald Trump is expected to attend that memorial ceremony Tuesday in Shanksville, along with Pennsylvania Gov. Tom Wolf and Interior Secretary Ryan Zinke.