Drug convictions can result in loss of license in Pa. 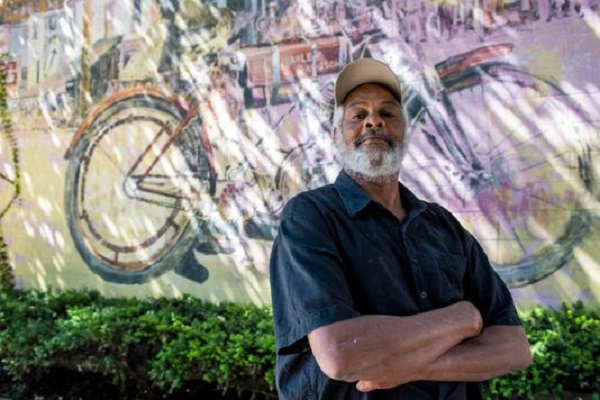 Mike Autry stands in an alleyway off West Market Street in York. In 2017, Autry was charged with possession of a small amount of marijuana after police eventually found a small piece of a blunt tucked behind his ear. He had been walking and shopping with his girlfriend. He ended up losing his driver’s license for one year. Pennsylvania is one of 12 states that still impose mandatory license suspensions for certain drug offenses, regardless of whether the crime has anything to do with driving. (Photo: Ty Lohr, York Daily Record)

Pennsylvania is one of 12 states that still impose mandatory driver’s license suspensions for some drug offenses — regardless of whether the crime has anything to do with driving.

(Undated) — Mike Autry was walking and shopping with his girlfriend on West Market Street in York on March 9, 2017, when a police officer recognized him.

Autry had a warrant out for his arrest because he’d failed to show up to a court hearing about owing money on older cases, including a DUI from 2005. Earlier, he’d smoked weed at his friend’s house. He’d tucked what was left of the blunt — which he described as being about 2 inches long — behind the back of his ear and forgot about it.

Police arrested him. Law enforcement eventually spotted what was left of the blunt and slapped him with additional charges.

Later, Autry pleaded guilty to possession of a small amount of marijuana and was ordered to serve 30 days on probation. But he was also hit with a one-year driver’s license suspension — even though he hadn’t been anywhere near a vehicle.

“It affects my whole life,” said Autry, 59, a handyman from York, who added that he now has to walk everywhere and can’t drive his grandchildren to the park. “Every time I get up and I want to go somewhere, I think about the fact that I should have a car and a driver’s license.”

Pennsylvania is one of 12 states that still impose mandatory driver’s license suspensions for certain drug offenses, regardless of whether the crime has anything to do with driving. In 2017, as many as 623 people in York County received a suspension in a case in which they were neither convicted of driving under the influence nor of committing a motor vehicle violation, a York Daily Record/Sunday News analysis of court records reveals.

Civil rights and liberties organizations describe these automatic suspensions as a relic of what they call the failed war on drugs, arguing that they disproportionately affect poor people and minority communities and prevent individuals who’ve already paid their debt to society from successfully reintegrating into it. Consequences can range from having to pay more for transportation to losing employment and housing.

Mike Autry holds out a piece of a cigar that’s the same size as the piece of marijuana blunt that he had tucked behind his ear when he was arrested on an outstanding warrant on March 9, 2017. He was nowhere near his vehicle. But Autry ended up losing his driver’s license for one year. (Photo: Ty Lohr, York Daily Record)

In the early 1990s, Congress passed a series of laws that threatened to withhold money from states if they didn’t put measures on the books imposing mandatory driver’s license suspensions for certain drug crimes.

Florence could bring 'major flooding' to the already-saturated midstate