Man dies in shootout with police at central Pennsylvania motel 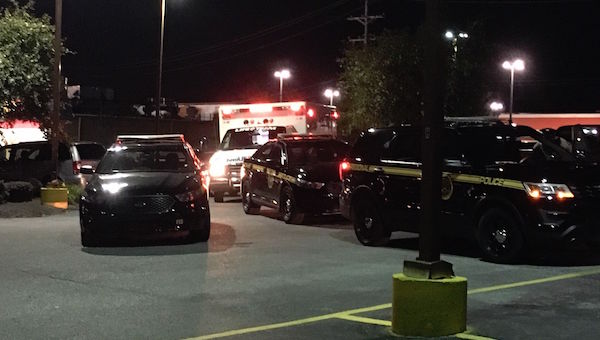 Numerous police vehicles and medical personnel were at the scene of a shooting Saturday night at a Motel 6 in Manchester Township. (Geoff Morrow/The York Daily Record)

A man is dead following a shootout with police at the Motel 6 in Manchester Township on Saturday night, according to a news release from Pennsylvania State Police.

The man, referred to only as a “known subject,” pulled a gun and fired it just after 8:30 p.m. at the motel, located at 125 Arsenal Road, the release states.

State police, along with the York County District Attorney’s Office, are now investigating the officer-involved shooting, according to the release.

At 8:36 p.m., two officers, one from West Manchester Township Police, the other from Northern York County Regional Police, responded to the motel after discovering that a man wanted in an alleged retail theft from earlier that day was staying there, the release states.

“The two officers made contact with the subject in a hallway inside the motel,” the release states. “During their interaction, the subject retrieved a firearm from his person and discharged it. An officer from West Manchester Township Police Department returned fire, striking the subject.”

The officers immediately provided first aid to the injured man and called emergency personnel to the motel.

No officers or other civilians were injured in the shooting, the release states.

The man was taken to York Hospital, where he was pronounced dead at 9:24 p.m., according to York County Coroner Pam Gay.

Gay said the man’s name will be released after his family has been notified and that an autopsy on his body is scheduled for Tuesday morning at Lehigh Valley Hospital.