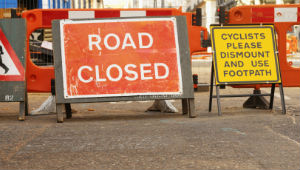 PennDOT advises motorists traveling south on Route 15 from north of Winfield to use Route 304 West to Route 204 South to Route 522 North, then go south on Market Street (Route 2017) to Route 35 North to go south to Route 11/15.

(Harrisburg) — A heavily traveled midstate highway is closed until at least this weekend following a crane accident.

PennDOT officials say work crews were installing concrete beams on a new bridge over Route 15 between Winfield, Union County and Shamokin Dam, Snyder County, when a crane tipped over onto the beams.

A steel girder fell onto Route 15, damaging the road.

No one was injured. The incident is under investigation.

David Thompson, community relations coordinator with PennDOT’s District 3, said they are hoping to reopen the road by Saturday.

“There’s some work that needs to be done, there’s a couple damaged beams that need to be removed. We have to inspect the rest of the beams that are across the road,” Thompson said.

Thompson added this incident is impactful, especially since other area roads are closed due to flooding and construction projects.

The area also sees increased visitors this time of year; the Little League World Series kicks off in Williamsport Thursday.

PennDOT advises motorists use these detours while the road is closed:

Route 15 north of the Route 61 ramp is open to local traffic and nearby businesses.