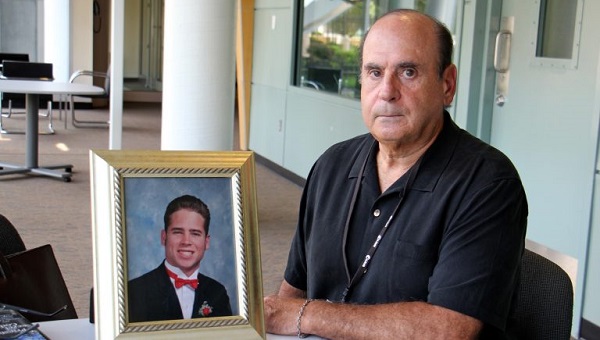 For years, Arthur Baselice Jr. has been in a self-imposed exile.

He doesn’t like leaving his house. He avoids large family gatherings. He frequently bursts into tears.

It’s been that way for more than a decade.

But the source of his pain began much earlier.

In the mid-1990s, his son, Arthur III, was given drugs and sexually abused by clergy at Archbishop Ryan High School in Northeast Philadelphia. His abusers included the principal, a Franciscan friar named Charles Newman.

The ordeal went on for years, and his son was emotionally ravaged by the experience. Arthur III eventually became hooked on heroin and died of an overdose in 2006 — leaving behind a young son and a hole in his father’s heart.

Arthur III’s abuse was not detailed in the two grand jury reports about Philadelphia clergy that came out in 2005 and 2011, but the archdiocese found the allegations credible and removed Newman from public ministry.

WHYY spoke with Baselice Jr. about his story in 2015.

“The only thing that’s changed is the date. Everything else is the same,” he said, adding that day-to-day life is “misery.”

On the heels of Tuesday’s release of a sweeping grand jury report implicating 301 “predator priests” across Pennsylvania who allegedly abused more than 1,000 children, Baselice says he’s being sent deeper into a “dark hole.”

For victims and their families, having these reports come to light can be a vindication, but there are also a lot of difficult emotions that can be a struggle to process years — and even decades — later.

Arthur Baselice Jr. knows that all too well.

His mission now is to push Pennsylvania lawmakers to change laws to be more friendly to victims of child sexual assault.