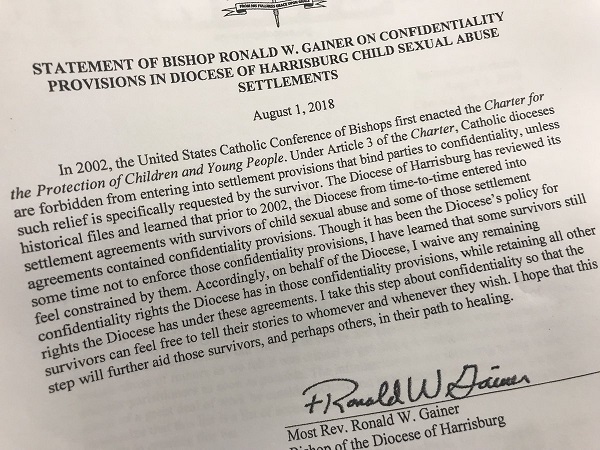 Bishop Ronald Gainer, head of the Roman Catholic Diocese of Harrisburg, Wednesday released a list of 71 clergy members and others involved with the Church who have been accused of child sex misconduct or abuse.

Diocese attorney Matthew Haverstick says, “This list compiles, as far back as we have in our records, every individual against whom an allegation was made and that allegation subsequently was not disproven by law enforcement.” This means that the people on the list have been accused of child sex abuse, but, Haverstick says, they are not being called “sexual abusers.” The allegations date back to the 1940s, and over half of the people named are dead.

Bishop Gainer said the Diocese has taken steps to protect children and that names of the accused clergy members will be removed from buildings, facilities, rooms and memorials.

Additionally, Bishop Gainer is waiving confidentiality agreements between the diocese and survivors of child sex abuse “so that the survivors can feel free to tell their stories,” he says. A new website to address child sex abuse and policies of the Diocese of Harrisburg has also been launched by the diocese.

Bishop Gainer released the list Wednesday, a week before the Pennsylvania Supreme Court has said it will release a redacted version of a grand jury report on child sex abuse by clergy members in Pennsylvania dioceses.

The grand jury investigation looks at allegations of child sex abuse in six dioceses, including Harrisburg, and identifies over 300 “predator priests.”

Identifying information of clergy members and others who are challenging the report will be blacked out to avoid infringing on anyone’s constitutional rights. Judge John Cleland, who led the child molestation trial of Jerry Sandusky, will serve as special master and help determine which information can be shared in the report.

On Thursday’s Smart Talk to discuss the report and its aftermath are Representative Mark Rozzi (D-Berks), an abuse survivor himself, Pennsylvania Victim Advocate Jennifer Storm, and Angela Liddle, President and CEO of the Pennsylvania Family Support Alliance. Bishop Ronald Gainer was invited to participate in today’s Smart Talk, but a diocese representative declined the invitation. 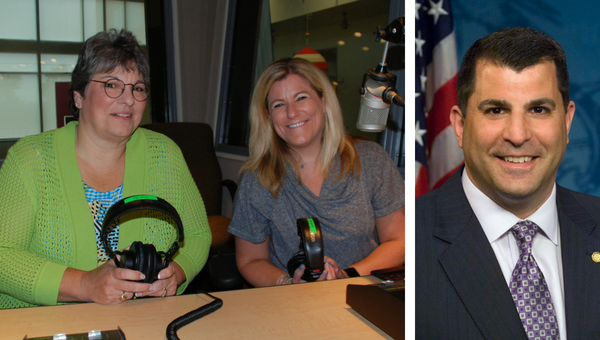