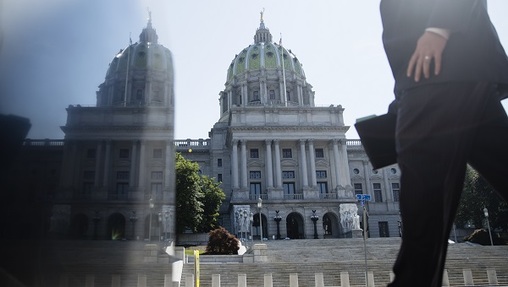 (Harrisburg) — A state commission is trying to figure out how to cut costs in Pennsylvania’s two largest, heavily-indebted pension funds.

Basically, the money needed to pay thousands of pensions isn’t there.

That’s nothing new. But what is new is a commission of lawmakers and state officials who are working to come up with a plan to pay down the debt.

Treasurer Joe Torsella has estimated that in the last 10 years, the state has wasted roughly $5.5 billion on payments to investment managers whose high-risk funds didn’t pay off.

One of his main goals is making those investment fees more transparent.

“I’m hopeful that the systems will take a look at their positions in higher-cost investments, and maybe there’s some change in asset allocation that might, in the very near term, drive down cost,” he said.

The commission has six months overall to come up with recommendations for the two pension funds.

One of its end goals is finding $1.5 billion in savings over the next 30 years for each system.