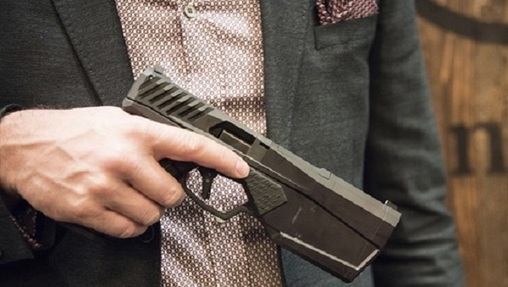 Extreme risk protection laws give families an avenue to temporarily seize guns from a person in crisis. (Photo by AP)

(Harrisburg) — Ahead of the legislature’s return to Harrisburg this fall, Representative Todd Stephens is spending his summer trying to get fellow conservatives on board with a modest gun control proposal.

The Montgomery County Republican introduced his extreme risk protection, or “red flag” bill in February, in the wake of a mass school shooting in Florida.

Five states have similar laws in effect, and Stephens said around thirty more are considering them.

The version in Pennsylvania’s statehouse hasn’t moved much since its introduction.

It would let family members request a court temporarily take weapons from a person who may be dangerous or suicidal.  That person would get an expedited hearing before a judge, and could have their firearms seized for three months to a year.

The measure would grant police a search warrant to take a person’s guns if there’s probable cause they haven’t been relinquished.

Though the bill did make it through a House committee vote before lawmakers adjourned for the summer, its support among Republicans is shaky.

Stephens said he’s trying to stress that it offers people in crisis a more lenient option than involuntary psychiatric commitment.

“The 302 [involuntary commitment] process means you’re taken away from your home, your job, your family against your will for up to five days. And you lose your firearms rights for life,” he said.

He noted, he’s gotten support from both gun control and law enforcement groups.

Shira Goodman, with CeaseFire PA, said in the spring that it’s a matter of being pragmatic; while she’d like to make major changes to assault weapon and ammunition sales, she’ll settle for proposals that can actually pass.

The NRA still opposes the bill, but Stephens is hoping that will change.

“[If] more of the gun rights groups start to understand this provides due process that is currently lacking, I think you’ll start to see more of them either come on board, which I would very much look forward to, or at the very least end up neutral on the bill,” he said.

If the bill doesn’t pass Pennsylvania’s legislature before the end of the year, the effort will likely have to start over from scratch.

Redacted version of clergy abuse report will be made public, court orders