What does Letterkenny Army Depot actually do? 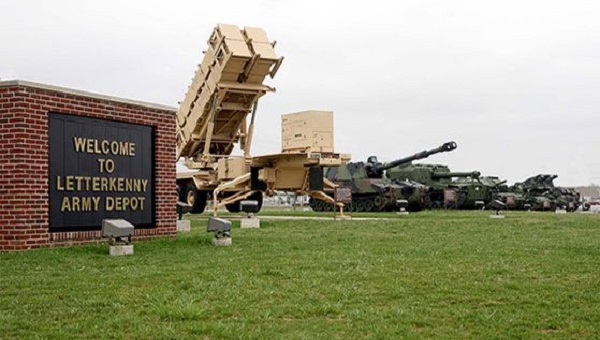 The Patriot missile launcher is displayed at the entrance of Letterkenny Army Depot. (Public Opinion file)

Building 350, the 320,000-square-foot vehicle shop – and the site of a fire and explosion that left four workers injured on Thursday – is the largest building on the depot. Located in the industrial area, the building is far removed from the munitions area where ammunition and small missiles are stored. The depot, including the Letterkenny Munitions Center, covers about 18,000 acres.

Crews have supported U.S. military operations across the world throughout Letterkenny’s 75-year history.

Letterkenny manufactures, refurbishes, maintains and stores components for the military’s tactical missile air defense systems. The Patriot anti-missile system is the best known. Four of the installation’s 10 Shingo medallions have been for Patriot work. The Shingo Award is considered the Nobel Prize for manufacturing.

Letterkenny, with about 3,600 workers, is the second largest employer in Franklin County, behind Summit Health. The depot’s payroll and contracts are worth more than $250 million annually to the region.

The depot originally opened in Franklin County as the Letterkenny Ordinance Depot in the spring of 1942. The government took 20,400 acres of farmland in Greene and Letterkenny townships and displaced about 250 families. The depot’s first missions during World War II were to supply the troops and stockpile munitions.