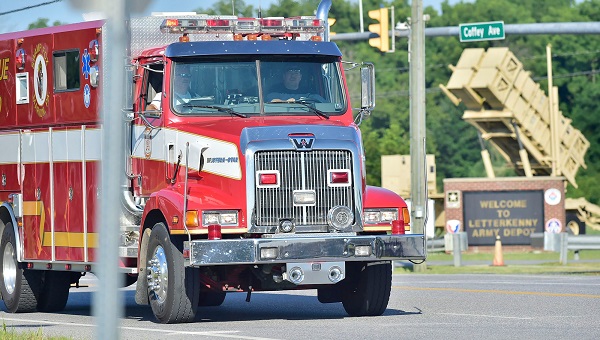 An emergency vehicle drives along Coffey Av. in front of LEAD. An explosion was reported at around 7 a.m. Thursday morning, July 19, 2018 at Letterkenny Army Depot, Chambersburg, Pa. Injuries were reported at Building 350 and air medical responded to tthe scene. (Markell DeLoatch, Public Opinion)

(Chambersburg) — Update, 5:17 p.m.: Letterkenny Army Depot announced just before 5 p.m. that a fifth person was injured as a result of the fire and explosion Thursday morning.

The employee was treated at a local hospital for smoke inhalation and later released, the army depot said in a statement.

The story below has been updated to reflect the additional injured person.

Rehab is part of the continuum of care in Northumberland County