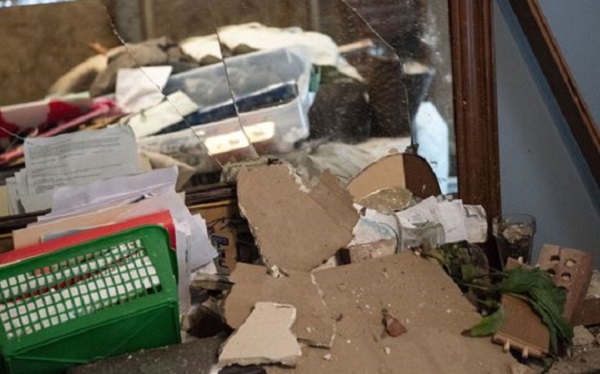 Bricks shattered a mirror on the opposite side of the room. (Photo: Ty Lohr, York Daily Record)

The crash happened at about 11 a.m. on the Fourth of July and was captured on video. The home belongs to Jennifer Smith, a defense attorney in York.

(York) — At first, Jennifer Smith thought a bookcase might’ve fallen in her home in Manchester Township.

But it was too loud, she said, and went on for too long. So Smith figured that someone must’ve crashed into the house. She’s lived on North George Street near Locust Lane for almost six years — and there have been some “really bad” accidents.

Smith rushed outside. There was a massive hole in the side of her home. She later saw Pennsylvania State Police Cpl. Brian Torkar — and a man who was in handcuffs.

“There aren’t enough apologies in the world,” the man said.

Kameron Smith, 28, of York — no relation — is charged with fleeing or attempting to elude a police officer, causing or risking a catastrophe, DUI and related offenses. He’s free on $2,500 bail and has a preliminary hearing scheduled for July 18, according to court records.

The crash happened at about 11 a.m. on Wednesday and was captured on security cameras outside the home. (You can watch the video at the top of this story.) No one was hurt.

Torkar was on Interstate 83 at Route 30 when he clocked a white Mini Cooper going 88 mph in a 55 mph zone. Kameron Smith accelerated and got off the highway, passed cars on the right and left sides of the road and went through a red light, police said.

Jennifer Smith recalls what she was thinking as a car crashed through her house on July 4. Ty Lohr, tlohr@ydr.com

Later, he lost control of the vehicle, drove through a yard and slammed into the house. The man told investigators that he wasn’t trying to flee, police said, “rather his shoe got stuck on the accelerator.”

Police said Kameron Smith’s driver’s license is suspended in Pennsylvania and Missouri. He doesn’t have insurance. And the Mini Cooper had a temporary registration from Virginia that was expired.

Jennifer Smith lives in the home with her mother, Barbara, and had just been in the room to get wrapping paper. She was walking out to the kitchen when the crash happened.

She estimates that there’s at least $20,000 worth of damage. Plus, she said, she’ll have to repaint the house if she can’t get the masonry to match. She’s hoping that the man is ordered to pay restitution to her for the $1,000 deductible and to her homeowners insurance company.

Smith is a defense attorney in York. She previously worked as a deputy prosecutor in the York County District Attorney’s Office.

A trooper jokingly asked her if she got a new client.

But, on a brighter note, several neighbors ran over to help.

One of them is a contractor who closed the hole before it started to rain. Another is an EMT who turned off the electricity to prevent a fire.

“I have some of the best neighbors,” Smith said. “That’s for sure.”