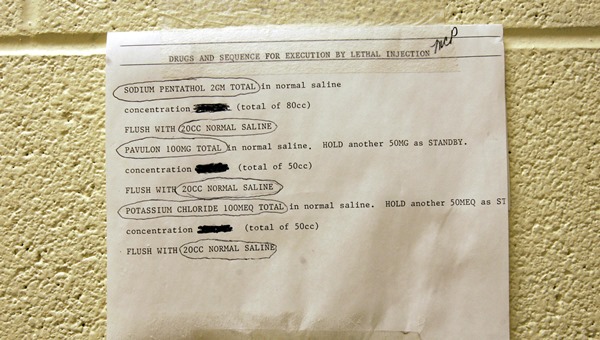 FILE – The combinations and sequence for lethal injection drugs is posted on a wall in a room next to the death chamber at the Southern Ohio Correctional Facility in Lucasville, Ohio. (AP Photo/Kiichiro Sato, File)

(Harrisburg) — A long-awaited study out of the state General Assembly offered a scathing assessment of the state’s capital punishment system this week, saying the death penalty comes at a high cost to state taxpayers without deterring crime.

The 280-page bipartisan effort, “Report on Capital Punishment in the Commonwealth of Pennsylvania,” examined 17 aspects of the system, and proposed a series of reforms — legislative and judicial. It examined the disproportionate percentage of inmates with intellectual disabilities on death row, the biased selection of juries, and the cost of capital punishment compared to life imprisonment without the possibility of parole.

According to the report, it costs $59,000 to try a capital case in Pennsylvania, while a non-capital case costs a little over $5,000. And it costs $15,000 more per year to keep a death-row inmate incarcerated.

“Given the fact that we can protect our community with life without the possibility of parole, spending this kind of money to fix what is clearly a broken system, maybe that doesn’t make sense,” said Marc Bookman, co-director of the Atlantic Center for Capital Representation, a Philadelphia-based death penalty resource center.

The State Senate ordered the review in 2011. In 2015, Gov. Tom Wolf called for a moratorium on capital punishment, blocking executions in the Commonwealthwhile he awaited the study’s findings. 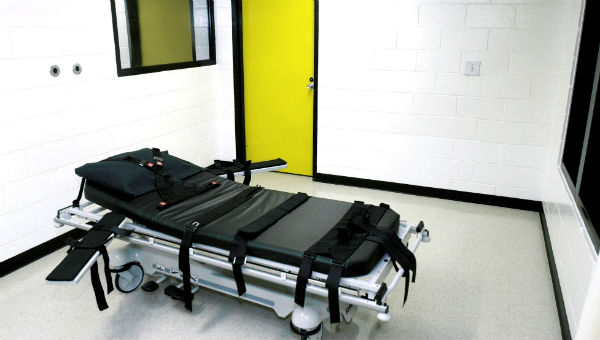 “The overwhelming majority of the victims we serve who have offenders on death row are in favor of it and want to see it carried out,” said Jennifer Storm of the Pennsylvania Office of Victim Advocate. “When you think about death penalty cases and why they’re sought, you’re talking about these horrific cases. These families have experienced egregious losses.”

In practice, capital punishment has been a rarity in Pennsylvania.

Since the 1970s, only three people have been executed, and each voluntarily gave up their appeals.

The last was Gary Heidnik, who was lethally injected in 1999 after kidnapping and raping six women, killing two of them, while holding them prisoner in the basement of his Philadelphia home.

Pennsylvania hasn’t had an involuntary execution since 1962.

Yet, since 1985, governors have signed more than 450 death warrants, and currently 149 people are on death row, all men.

Bookman pointed out that in Pennsylvania life sentences are always imposed without the possibility of parole, which he argues makes it a plausible alternative to the death penalty.

If Pennsylvania wants to make the capital punishment system fairer, Bookman says one of the most important reforms that the study recommended is the establishment of a state-funded capital defender office.

“You’ve got racial discrimination that is not exposed in the sunlight. You’ve got bad defense lawyers. Paying for a capital group of attorneys in a centralized location in Pennsylvania would address many of these issues,” said Bookman, who served as a Philadelphia public defender for almost 30 years.

Philadelphia District Attorney Larry Krasner, who was elected on an anti-death penalty platform, was criticized by some this week for not pursuing capital murder charges in the case against Carlton Hipps and Ramone Williams for the 2015 murder of Philadelphia police officer Robert Wilson III.

Krasner negotiated a plea deal offering the brothers ‘life’ plus 50 to 100 years in prison in exchange for pleading guilty and waiving any appeals.