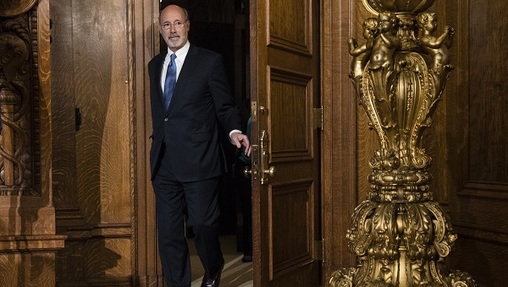 A spokesman for House leaders said the chamber is willing to consider the governor’s proposal. (Photo by AP)

(Harrisburg) — Governor Tom Wolf is appealing the legislature to pass laws getting rid of 13 professional licensing requirements, including ones for barbers, cemetery brokers — i.e. people who sell grave plots — and auctioneers.

He’s arguing, licensing requirements in those jobs can be a barrier that keeps people from working.

Across the country, the number of professions requiring special state licenses has ballooned over the last several decades.

Pennsylvania is home to 29 boards and commissions that regulate 255 kinds of licenses.

Wolf’s call for fewer regulations comes after the release of a study he commissioned via executive order last year on the impact of license laws.

The commonwealth is about average when compared with other states. However, the study found it does have five license types that don’t exist anywhere else in the US.

A spokesman for House leaders noted, existing license laws are in place for a reason–but added, the chamber is willing to discuss a change.