PA’s voter registration system will be audited over hacking concerns 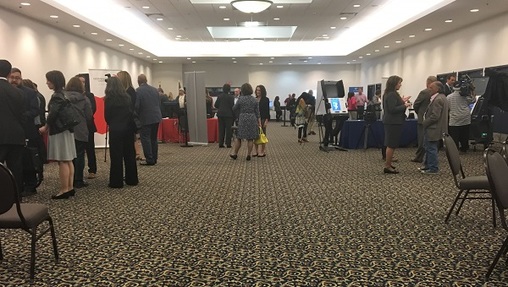 A display of voting machines that use paper-backed ballots. Governor Tom Wolf has ordered all counties to upgrade to these machines over concerns current ones are too easy to tamper with. (Photo by AP)

(Harrisburg) — The state Auditor General is launching a review of Pennsylvania’s voting and registration process, following up on concerns Russians attempted to interfere in the 2016 elections.

Auditor General Eugene DePasquale said the review will focus on the security of the Statewide Uniform Registry of Electors–or SURE–system, which tracks registration data on the state and county level.

However, he said, “there is zero question that Russians tried to hack it and to interfere in the 2016 election process in Pennsylvania, and at least 20 other states” according to the US Department of Homeland Security.

Calling the sixteen-year-old SURE system “outdated,” DePasquale said the audit will help the Department of State come up with a plan to replace it.

The Westmoreland County Republican said on a basic level, the audit should give voters peace of mind.

“It’s just so important that we put some integrity back in the system, so that the voters have confidence when they go to the polls that what they do matters,” she said.

In a separate effort to increase poll security, Governor Tom Wolf issued an order earlier this year mandating that counties update their voting machines to use paper ballots, which are considered easier to double check than electronic-only machines.

Secretary of State Robert Torres said talks are ongoing about how counties will actually pay for across-the-board upgrades, but there’s no solution yet.

“The only money we have toward that effort is the nearly $14 million dollars that was provided by the federal government,” he said.

Torres has previously estimated it would cost between $100 and $150 million for all the counties in the commonwealth to update their machines.

However, he was adamant that new machines are necessary.

“It’s about security. It’s about resiliency so you’re able to recover from events,” he said. “And it’s not just the Department of State–I think the US Senate Intelligence Committee has also recommended that, and there’s groups of independent experts…that have recommended going to voter-verifiable paper ballots.”

Episode 54: Too many redistricting bills, not enough time