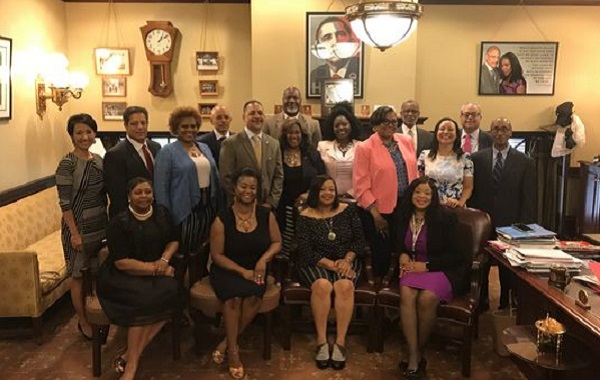 (Harrisburg) — State Sen. Vincent Hughes, D-Philadelphia/Montgomery County, was among the first to reach out to the five black women who were asked to leave Grandview Golf Club in April.

On Tuesday in his Harrisburg office, Hughes hosted the same five women in an effort to better learn their story from that incident on April 21 in which Northern York County Regional Police were twice called because of alleged slow play.

“We wanted to make sure their issue was not forgotten, that their voice was heard and continues to be heard,” Hughes said during the meeting with media, state senators and representatives, and, of course, golfers Sandra Thompson, 50, president of the York branch of the NAACP; Myneca Ojo, 56; Carolyn Dow, 56; Karen Crosby, 58; and Sandra Harrison, 59.

The women allege racial and gender discrimination from the Dover Township golf course after they were asked by Grandview management to leave.

The women are regular golfers, part of a group started in 2008 called “Sisters in the Fairway” that plays courses around the world.

Ojo said at Tuesday’s meeting that while they’ve played Grandview before, this was the first time playing under the current ownership.

The women had previously stated they were granted permission to play as a five-some (when foursomes are generally the norm). They’ve disagreed with the assertion they were playing slowly, and the group behind them