West York: Handling of wearing short shorts was “not in line with standards” 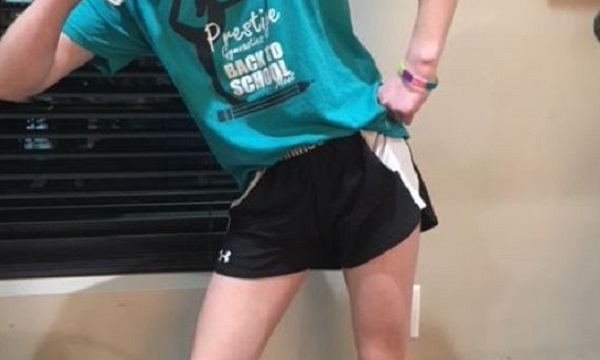 This is the outfit Amelia Myers was wearing to school when she was sent to the nurse’s office for a dress code infraction, her mother, Jennifer Myers said. She was given a warning and released. (Photo: Submitted)

“I am a pretty strict parent,” Shawn Fink said. “If it passes my approval, that’s a pretty good sign it’s not too short.”

(West York) —  Shawn Fink received a text from one of her daughters at the beginning of school on Tuesday morning: “Mom, you need to bring me a pair of shorts.”

Fink wondered why. She found out her daughter, Jadyn, a sixth grader at West York Middle School, was one of dozens of girls who had been pulled into the nurse’s office because of the school’s dress code, which states that shorts, skirts and dresses must be at least mid-thigh length.

The students missed class time while parents showed up with a change of clothes. Fink said she had just complimented her daughter on her outfit that morning. It was tasteful.

“I am a pretty strict parent,” she said. “If it passes my approval, that’s a pretty good sign it’s not too short.”

To her, Fink said, it felt like girl shaming. She thinks a bigger conversation needs to be had about how they are treated. Girls should not be treated like sex objects. Boys should be treated equally, too.

Some parents shared how upset they were by how it was handled. The district issued a statement Wednesday afternoon, saying an initial investigation showed that students were “safe at all times,” but it also “revealed that the manner by which the infraction was addressed was not in line with District standards.”

The district will be in contact with the parents whose children were pulled into the nurse’s office, district spokeswoman Cynthia Greco said.

With the warmer weather, the nurse was seeing a small group of students being sent to her office on a regular basis because she has extra clothes. She wanted to nip it in the bud, Greco said.

The school nurse was not directed to pull students in for dress code infractions, Greco said.

Greco said she anticipates that the district will have more information by the end of the week.

Jennifer Myers said her sixth-grade daughter, Amelia, was one of the students who was singled out but was let go with a warning. Her daughter was wearing athletic shorts.

Myers said the nurse made her daughter bend over to check the length of the shorts. Her daughter felt degraded.

Myers said she met with school officials to express her concerns, and she was pleased with how the meeting went. The district is planning to make a new dress code.

Tania Thomas said her daughter, who also is in sixth grade, changed into gym clothes because she was not taking another outfit in to the school. Her daughter was wearing a knit sweater with her blue jean shorts, and she was told that her bra was not under her cami top, which she was wearing underneath the sweater.

Thomas said the nurse hung up on her as she tried to ask questions, such as why her daughter was pulled out and what was her daughter wearing.

“I know my daughter felt uncomfortable and had tears in her eyes,” Thomas said.

She, too, met with school officials and received an apology. Thomas said she offered suggestions, such as going over what’s appropriate and not appropriate with the students when the weather is warm. Parents also could be warned ahead of time through communication systems about what the district intends to do to address problems.

She also suggested that parents be warned ahead of time, such as through mass emails or texts.

Another parent, Michelle Weaver, said she took her daughter out of school for the day after she was singled out. Her daughter was upset. She had been wearing the same shorts to school for the past month and a half.

If the school was going to enforce the dress code, “they should have done it from the very beginning,” Weaver said.

The district posted a statement on its Facebook page Wednesday afternoon:

“On Tuesday, May 22, 2018, at the West York Area Middle School, several students were directed to report to the health suite as a result of dress code infractions. The District’s initial investigation concluded that the students involved were safe at all times. However, the investigation also revealed that the manner by which the infraction was addressed was not in line with District standards. The West York Area School District’s commitment to Every Student Every Day emphasizes treating all students with respect and dignity at all times. To that end, the administration is reviewing policies and procedures to ensure a safe, healthy, and positive learning environment.”