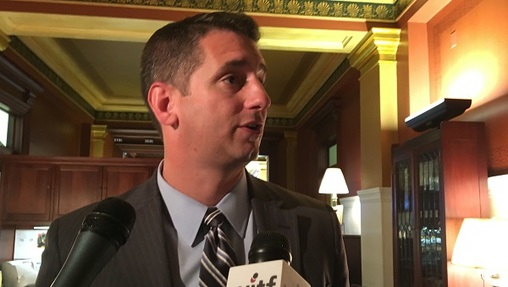 (Harrisburg) — In recent weeks, proponents of overhauling Pennsylvania’s redistricting process with an independent citizens’ commission have been frustrated as their bills have been repeatedly gutted by the Republican majority in a prominent state House committee.

But now, those advocates may be getting an unexpected new ally in House GOP Leader Dave Reed, who told reporters Tuesday, this is an issue he wants to address before he departs the legislature at the end of this year.

Currently, congressional redistricting is done by the legislature, and the governor signs off on it.

Reform proponents say that makes the process too partisan, and argue an independent panel of citizens would be more representative.

Opponents, like House State Government Committee Chair Daryl Metcalfe–who has made a project of quickly blocking the bills–say the legislature itself is perfectly representative.

The independent commission effort has been recently championed by the Democratic minority, who stand to gain more through reform.

But Reed argued, it’s not a fundamentally partisan issue.

“I’ve heard a lot of comments from a lot of folks across the state with frustrations with our current redistricting process, and you know to be honest, I agree,” he said. “I don’t think it’s the greatest process in the world. It’s served us for the last couple hundred years, but I think it could be better.”

He plans to circulate his own bill soon, and said he has been discussing the matter with other lawmakers on and off for about a year.

He has serious reservations about a number of already-introduced bills on the subject, saying they leave the panel-selection process too open to political tampering.

“I think maybe we should look at it more like how we look at a jury selection process, where everybody gets put into the pool…you have less of a chance of folks gaming that system, and more of a chance of a truly independent commission,” he said.

He also wants to include specific guidelines on what districts should look like.

The bill likely has to pass by July 6th to move forward as a constitutional amendment this session–and Reed noted, it’s a short time frame.

He also acknowledged, his impending retirement means other lawmakers will have to finish the effort.

“That can all be a discussion,” he said. “But we’re running out of time, and I think it’s a topic that merits serious consideration, just where things are at electorally in this country.”

Short of calling for a limited constitutional convention–which Reed indicated he isn’t opposed to–any bill he comes up with would have to garner enough support to get through Metcalfe’s committee.

Lawmakers divided over how to fix State System of Higher Education