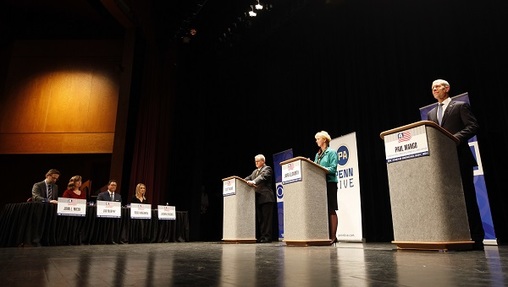 Paul Mango and Scott Wagner have been exchanging barbs via TV ads, while Laura Ellsworth is steering clear of negativity. (Photo by AP)

(Harrisburg) — In the midst of releasing negative, personal campaign ads, GOP gubernatorial candidates Paul Mango and Scott Wagner are also clashing over their own poll numbers.

However, too little information is ultimately available to assess where the primary race stands with potential voters.

Wagner recently released results from an internal poll by the conservative research firm McLaughlin and Associates, showing he holds a nearly 27-point lead.

Mango countered with surveys that show a closer race, including one from Susquehanna Polling and Research that had Wagner with just a three-point lead. The full results aren’t public.

So, how seriously should voters take those numbers?

“The differences could largely be wrapped up in assessments of methodology, selection of voters, and a whole variety of other things,” he said.

He said more significant are the vehement ads the two candidates–particularly Mango–are putting out.

To him, they may ultimately benefit Laura Ellsworth, a less well-funded candidate who has steered clear of negativity.

“There isn’t any doubt that the negative commercials have been among the most brutal seen in a gubernatorial race since television commercials were utilized in a major way,” Madonna said.

The ads include Mango calling Wagner violent, a “slumlord” and a “deadbeat dad.”

Wagner, meanwhile, has disparagingly called Mango liberal, an advocate for Obamacare, and a “phony.”